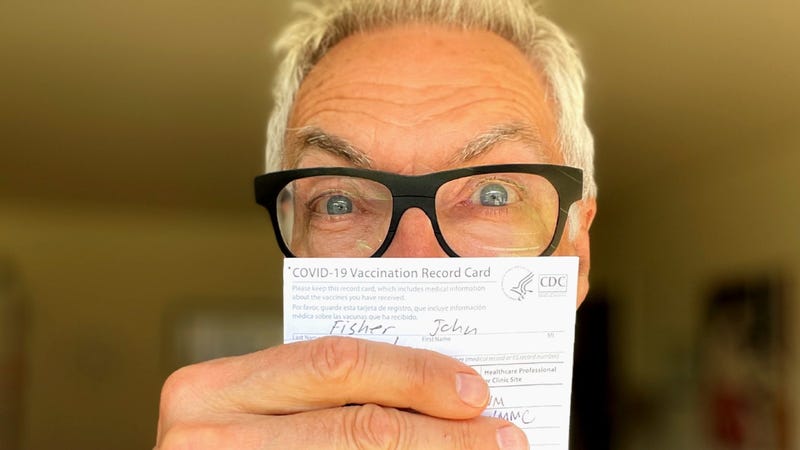 Me and my COVID card. Quit trying to spot my personal info. You can't see it.
By John Fisher

The State of Washington is joining a bunch of other states around the country with a new tactic aimed at persuading more skeptics to get their COVID vaccination.

Since appeals to residents based on science, or compassion for your fellow humans, haven't worked, Washington is trying good old-fashioned materialism, dangling cash and prizes in your face in hopes that you'll get vaccinated ASAP.

It's called Shot of a Lifetime, and it goes through the month of June. In fairness to those of us early adopters who were vaccinated months ago when we first had the chance, anyone who either gets a shot by June 30 or who's already gotten at least one shot is eligible for a massive stash of prizes, the biggest of which is cold hard cash.

Cash: Starting on Tuesday, June 8, the Washington State Lottery will do a drawing a week for four weeks, with a prize of $250,000 each week. At the end of the fourth week, they'll do a final $1 million drawing.

Tuition: The state will hand out $1 million to public four-year universities and two-year community and technical colleges so they can run their own drawings for tuition and expenses. Also, they're giving away 30 batches of one year of tuition credits for college through the state's GET program for 12 to 17-year-olds.

Airline and pro sports tickets: Alaska Airlines tickets for four to an away Mariners game, suite tickets for the Mariners at home, and tickets for the Sounders, the Storm, the Seahawks, the Kraken, and the Reign -- in most cases these are primo seats, too.

Tech gear: Xboxes (300 of them!) from Microsoft, Switches from Nintendo, Echo Dots from Amazon, and Google Nests from Google are up for grabs.

Gift cards: Courtesy of the Association of Washington Businesses, all kinds of gift cards for goods and services at local businesses all over the state.

If you’re vaccinated, then you’re already entered to win.

If not, the only thing you need to do to enter is get your shot. #shotofalifetime pic.twitter.com/3jkzFoZG2s

The goal is to get 70 percent of eligible people in the state vaccinated by June 30, or sooner, to meet the governor's goal of totally reopening the state by then.

The state has a record of everyone who gets vaccinated, so you don't have to do anything -- if you've gotten at least one shot, you're in the system. If you're a lucky winner, they'll find you with the contact information you provided when you got your shot.

And even if you don't win the state's big vaccine lottery, starting Wednesday, June 9, you've still got eleven chances each weekday to Cash In While You Work and win $1,000 just for listening to The Sound!