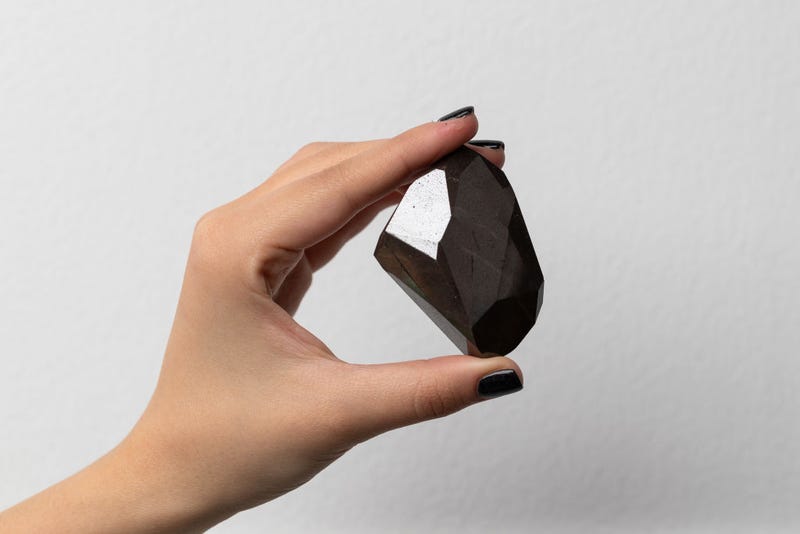 The Largest Faceted Diamond to ever come to Auction, The Enigma, at 555.55 carats is unveiled at Sotheby's Dubai, on January 17, 2022 in Dubai, United Arab Emirates. (Photo by Neville Hopwood/Getty Images for Sotheby's Dubai) Photo credit Getty Images
By Lauren Barry, NewsRadio 1080 KRLD

A 555.55-carat black diamond dubbed “The Enigma” that scientists believe has origins in outer space is now on exhibit in Dubai, United Arab Emirates, and will be up for auction beginning Feb. 3.

“Its origins are shrouded in mystery – thought to have been created either from a meteoric impact or having actually emerged from a diamond-bearing asteroid that collided with Earth,” said Sotheby’s of The Enigma.

Some black diamonds get their color from a process such as radiation treatment, according to the International Gem Society. On the other hand, the color of naturally black diamonds “typically comes from the presence of many small, dark colored inclusions and fractures,” said the society.

'The Enigma' - a treasure from interstellar space and the largest faceted diamond to ever come to auction is unveiled today in Sotheby's Dubai https://t.co/1nyUAsTe8j #SothebysDiamonds #blackdiamond #SothebysJewels pic.twitter.com/s713AVo14c

Carbonado stones are a type of black diamond also described as “a polycrystalline or aggregate material of amorphous carbon, graphite, and diamond,” by the International Gem Society. This material dates from 2.6 to 3.8 billion years ago is actually more durable than diamond and is usually used in industrial applications.

“With the carbonado diamonds, we believe that they were formed through extraterrestrial origins, with meteorites colliding with the Earth and either forming chemical vapor disposition or indeed coming from the meteorites themselves,” Sophie Stevens, a jewelry specialist at Sotheby’s Dubai, told the Associated Press.

The International Gem Society explained that carbonados are “never found in igneous kimberlite rock formed deep within the Earth,” where other diamonds are found and micro-diamonds present in carbonado stones “lack traces of minerals found deep in the Earth’s mantle, typical of other diamonds.”

Traces of nitrogen, hydrogen, and osbornite – a mineral otherwise found only in meteors – suggest carbonados originated in outer space.

On Earth, carbonados are only found in Brazil and the Central African Republic. It is possible that a diamond meteorite struck the Earth at a time when the two areas were phsically connected.

Researchers Jozsef Garai and Stephen Haggerty have a different hypothesis. They have argued that diamonds found in carbonado may have been formed in supernovae explosions and eventually collided with Earth.

A famous example of a natural black diamond is the Black Orlov stone. According to Town & Country, a monk stole the diamond from the eye of a Hindu statue of Brahma in the 19th century and locals then believed it was cursed. Since then, that diamond was connected to three people who jumped to their deaths. At 67.5 carats, it is much smaller than the one currently up for auction.

In addition to its 555.55-carat size, The Enigma is further associated with the number five with its 55 facets, according to Sotheby’s Stevens.

“The shape of the diamond is based on the Middle-Eastern palm symbol of the Khamsa, which stands for strength and it stands for protection,” she said. In Arabic, Khamsa means five.

The Enigma is also expected to sell for £5 millon ($6.8 million). After its exhibit in Dubai, it will also be exhibited in Los Angeles later this month and London in early February.

Sotheby’s is accepting cryptocurrency as payment for the “extremely rare” diamond. The 277-year-old auction house said it sold The Key 10138 diamond with cryptocurrency for a “record price” last year.