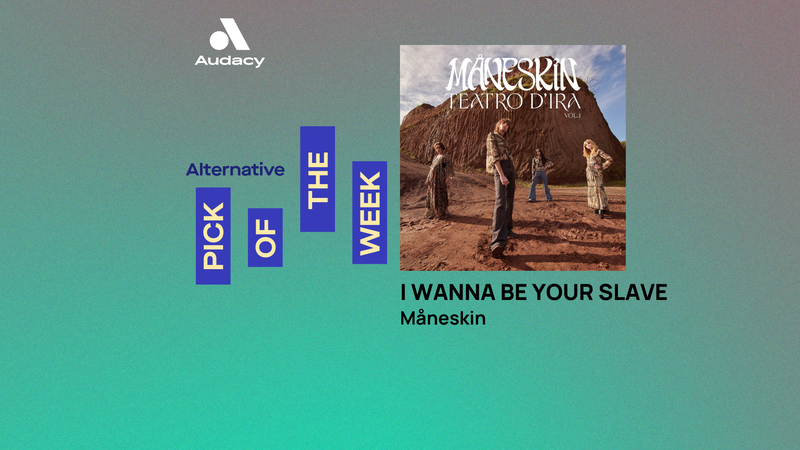 This week’s Audacy Alternative Pick of the Week is Måneskin's "I Wanna Be Your Slave."

Måneskin, which means “moonlight” in Danish, is formed by Damiano (vocalist) Victoria (bassist) Thomas (guitarist), and Ethan (drummer). While a few of the band members have been friends since junior high, they began playing music together in 2015. Their sound is characterized by a combination of the different members’ music influences: a mix of rock ’n’ roll, rap/hip hop, reggae, funky, and pop, all held together by lead vocalist Damiano’s soulful voice. This combination is also reflected in the band’s aesthetic, made unique by each member’s fashionable style. The young artists originally stood out to the public at the X Factor 11 live shows, where they dominated the stage. “Chosen”, their debut single that was released during the show, boasts several million streams across platforms and was certified double platinum. “Chosen” is also the title of their debut EP, released in December 2017 by Sony Music and produced by Lucio Fabbri, which was certified platinum just two months after it was released.

Their first 21-date tour produced by Vivo Concerti (February/April 2018) sold out in just a few hours. The single “Morirò da Re” (three-times platinum) was released in March 2018, followed by “Torna a casa” (five-times platinum). These tracks paved the way for the new album “Il ballo della vita," entirely written by Måneskin and produced in collaboration with Fabrizio Ferraguzzo, which was released on October 26, 2018. The record made its debut at #1 on the FIMI/Gfk chart with four singles earning a spot on the Top Ten and, less than two hours after its release, it peaked to #1 on iTunes, cracking, just a day after its release, the Spotify TOP 50 with all its songs and hitting 1 million streams in less than 24 hours.

In February 2019, the band went on tour across Europe, before returning to the best music clubs and festivals in Italy as part of the spring-summer leg of “IL BALLO DELLA VITA TOUR”, which ended on September 14, 2019 with a special date at Carroponte in Milan. Måneskin then performed at a sold-out special live show held on November 28, 2019 at The Dome in London.

Damiano, Victoria, Thomas and Ethan have earned 23 Platinum and five gold records, amassing over 140,000 tickets sold and 70 sold-out dates in both Italy and Europe. On October 30, 2020 they released their new single “Vent’Anni”, accompanied by a campaign shot by celebrated photographer Oliviero Toscani. Måneskin won the 71st Sanremo Music Festival with the song “ZITTI E BUONI”, and then conquered the Eurovision Song Contest in Rotterdam. The release of their second album “Teatro d’ira – Vol. I” on March 19, 2021 will be followed by a 13-date tour held for the first time ever at sports arenas across Italy, which will kick off in December 2021 and end at the Arena di Verona on April 23, 2022, as well as a tour across Europe’s greatest Music Festivals, which is scheduled for the summer of 2022.