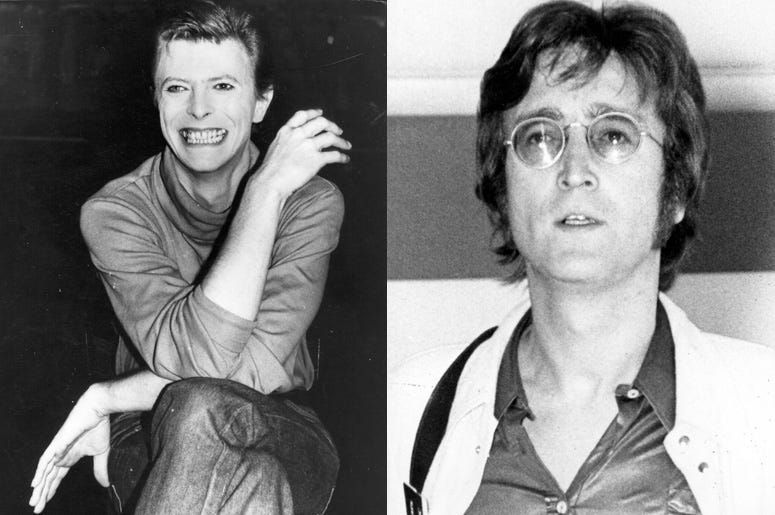 As fans across the world celebrate what would have been the late David Bowie’s 74th birthday on January 8, an incredible story has emerged about the time he spent with another rock icon.

Bowie’s longtime producer Tony Visconti was interviewed by BBC Radio 4 as part of a program marking the five year anniversary of his death and detailed the time the musician met John Lennon. The duo had agreed to collaborate on Bowie’s 1975 song “Fame” and met at a hotel room in New York City.

“He was terrified of meeting John Lennon,” Visconti said. Bowie asked the producer to accompany him and help “buffer the situation.”

Visconti then shared a story that presents itself as a fantastic “if I could only be a fly on the wall” moments. “About one in the morning I knocked on the door and for about the next two hours, John Lennon and David weren’t speaking to each other,” he said.

“Instead, David was sitting on the floor with an art pad and a charcoal and he was sketching things and he was completely ignoring Lennon. So, after about two hours of that, he [John] finally said to David, ‘Rip that pad in half and give me a few sheets. I want to draw you.’ So David said, ‘Oh, that’s a good idea’, and he finally opened up.”

Visconti added, “So John started making caricatures of David, and David started doing the same of John and they kept swapping them and then they started laughing and that broke the ice.”

From there, a “great friendship” was born.

The duo’s connection got rekindled once again as a previously unreleased version of Bowie covering Lennon’s hit song “Mother” was finally shared for the first time.

An extremely limited run of 8,147 copies of the 7” single has been made available with 1,000 available as a slick looking cream colored vinyl.