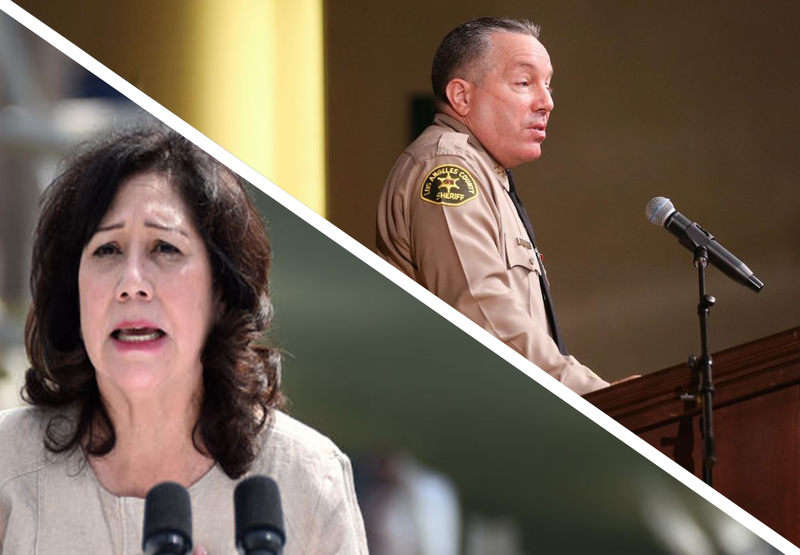 The study found that of 1,600 department employees who participated, 16 percent said they had been asked to join a secretive subgroup of their station, some of them resembling violent gangs in nature, at least once. A quarter of those said the invitation to join was extended in the last five years.

“For decades, groups of LASD deputies have organized themselves into secret subgroups, some of which have allegedly committed illegal acts or violated department policy,” the authors wrote.

On Wednesday, Villanueva said the report reflected measures his administration had already undertaken to reform deputy conduct regulations. He said of the 37 recommendations advanced by the RAND report, the department was already undertaking 30, and the remaining seven were “under review.”

He said some of those outstanding seven recommendations require additional funding prior to implementation and claimed that providing just eight hours of training to the entire department would cost at least $7.2 million.

“Anytime you try to change the culture of an organization or implement reforms, it takes time,” he said, noting that LASD is the second-largest law enforcement agency in the United States by the number of employees. “It takes time to move. And moving it is, I promise you,” he said.

Responding to the identification of certain organized subgroups within the department, Villanueva said the issue predated his administration and blamed predecessors for “kick[ing] the can down the road.”

Villanueva said his ability to deal with sheriff’s deputy subgroups was limited by members’ constitutional rights.

“They’re claiming we can just ban groups outright,” the sheriff said of the RAND report authors. “Well, that is unconstitutional.”

He explained he could only intervene and discipline deputies on the basis of subgroup membership when those groups have engaged in misconduct. He cited erroneous terminations ordered by previous administrations, which resulted in lawsuits and back pay paid to former deputies, one of which was “over a million-dollar settlement.”

Villanueva also noted that when he has intervened in instances of deputy misconduct, his ability to pursue justice has been limited by the function of his office.

“The fact that it takes years for a decision from the D.A.’s office is unacceptable. Their standard should be 90 days,” he said.

Ultimately, Villanueva insisted the RAND report “affirms and supports” what the department is “already doing.”

The sheriff pointed to implementation of duty-to-intervene and whistleblower protection policies department-wide, among other programs, as signs of progress.

“It would be helpful if the people across the street would acknowledge that,” he said of the L.A. County Board of Supervisors.

He downplayed the number of deputies estimated to be participating in subgroups, and characterized some as mere fraternal organizations that had no documented history of engaging in harmful activity.

“Subgroups exist in every organization, especially paramilitary organizations. The question is if that subgroup deviates into some kind of misconduct that harms, that is a key point here,” he said. “They’re a glorified bunch of people that go to the river and party on the weekends, that’s all they are.”

“It’s a problem of perception, but not reality,” Villanueva remarked, accusing county supervisors of exaggerating the issue for political purposes.

“They’ve sold their soul to the devil,” he said supervisors Hilda Solis, Holly Mitchell and Sheila Kuehl in particular.

He was especially critical board of supervisors chair Hilda Solis, who he lambasted for what he described as a “campaign to discredit and defund the sheriff’s department” for her “political gain at the expense of public safety.”

“Shame on you, Supervisor Hilda Solis,” he said.

When asked why he believed he was being targeted by certain members of the board of supervisors, the sheriff traced animosity back to his election to office, in which he overcame incumbent Sheriff Jim McDonnell.

“They have never accepted the results of the election of 2018, they endorsed the other side,” Villanueva said. “The other side gave them what they wanted, which was total control over the sheriff’s department.”

The RAND Corporation is not the only body to identify a problem with gang affiliation within LASD. A report conducted by the Loyola Law School Center for Juvenile Law and Policy from Jan. 2021 found “evidence that deputy gangs exist” which “foster a culture of violence and escalate uses of force against community members, including fatal shootings.”

The Loyola report identified “institutional failure” as the engine behind the alleged growth of deputy gangs in recent years.