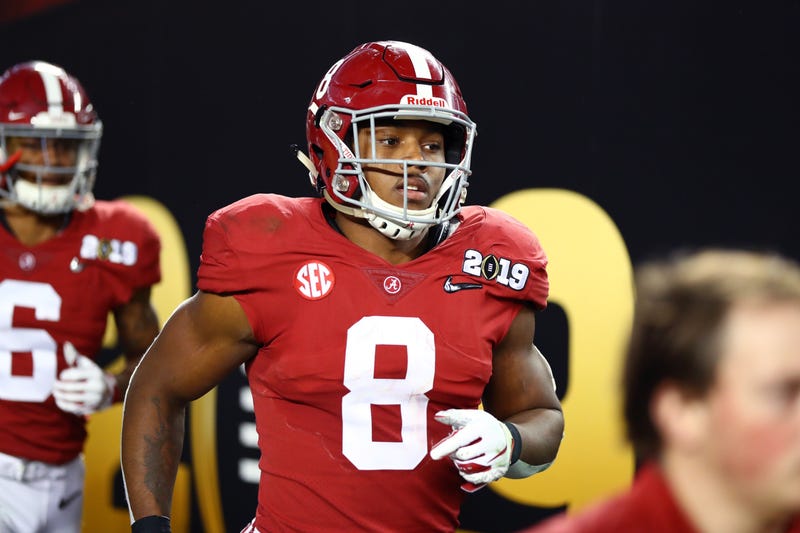 The NFL Draft almost never plays out the way you expect.

That is why after spending months scouting the players, the Eagles’ front office will spend the time between now and the draft on Thursday night going over different scenarios. They will debate what to do if certain players fall to them. They will debate trade up scenarios and trade down scenarios.

When they do go on the clock at No. 25 overall, however, there is a chance the team could be sitting there without a player there they expected. They might not have a great offer to trade down, and they might just have to pick from what is on the board.

If they do, they might end up with a player not many expect — like one of these seven players.

Josh Jacobs, RB, Alabama: The Eagles don’t want to take a running back in the first round. It would probably cut Howie Roseman to the core to do it. Still, if Jacobs is on the board and they don’t have a good offer to trade back, there is something to be said for making a safe pick like a running back. Jacobs might not be Ezekiel Elliott or Saquon Barkley, but in what should be a powerful offensive behind a strong offensive line, it would be surprising if he was a bust. The last thing the Eagles can do is whiff at No. 25. Jacobs would be a safe pick.
Jeffrey Simmons, DT, Mississippi State: When the Eagles traded No. 32 overall last season for an extra second-round pick, they did it because of how strong this year’s draft is. There is a strong chance they thought that extra second-round pick could help them move up in the first round for a player like Simmons. Simmons was considered a potential top-10 pick before tearing his ACL in February. If the Eagles taking a player that was going to go into the top-10 but falls because of injury sounds familiar, it should, as just two years ago they used a second-round pick on the then-injured Sidney Jones. The Jones pick hasn’t worked out great so far, but the Eagles want to leave this first-round with a game changing defensive tackle, and Simmons might be their best shot at No. 25.
Garrett Bradbury, G/C, NC State: Getting a young offensive linemen to develop should be a priority for the Eagles. If they are still high on Jordan Mailata the need for a developmental tackle isn’t that strong. The interior line, however, could use some help. Jason Kelce came back this season, and will likely be back for one more after that, but using a high pick to develop an elite center behind him would be a wise move. Until Kelce retires, Bradbury could fill in for an injured Brandon Brooks, or push Isaac Seumalo for playing time.
Tytus Howard, OT, Albama State: In a world where the Eagles aren’t as optimistic as Mailata as the rest of the fanbase seems to be, taking an offensive tackle becomes arguably their top need. Howard could be the pick in that world. Howard is a former high school quarterback, is super athletic and shined at the Senior Bowl. Howard could learn for a year behind Jason Peters, then take over in 2020, giving the Eagles an extremely athletic set of tackles to build around.
Greedy Williams, CB, LSU: You might think the Eagles don’t need a cornerback, but chances are, the front office disagrees with you. Jalen Mills and Ronald Darby are free agents after this season. Only Avonte Maddox is signed beyond 2020. If Williams falls, the Eagles might jump at the chance to take a cornerback that has legitimate No. 1, shutdown corner potential.
Hollywood Brown, WR, Oklahoma: Brown, the 5-foot-9, 166 pounds, is considered the most explosive receiver (or perhaps player) in the draft. He averaged 18.3 yards per catch on 132 receptions during his two years at Oklahoma, and after having a complete lack of speed on their offense last season, the idea of having both Brown and DeSean Jackson on their team next season is likely very appealing. Brown will likely be there at No. 25 overall, and if there isn’t a defensive linemen they like, the front office could decide to give quarterback Carson Wentz another weapon to work with.
N’Keal Harry, WR, Arizona State: Harry stands 6-foot-3, 213 pounds and had an extremely impressive final two seasons at Arizona State, pulling in 155 catches for 2,250 yards and 17 touchdowns. Harry has great hands and although he is projected as an outside receiver, he spent 27% of his time in 2018 in the slot, meaning the Eagles could move him around next year. The Eagles do have three receivers set in stone as starters in Alshon Jeffery, Nelson Agholor and DeSean Jackson, but Agholor is a free agent in 2020 and Jackson will be 33. Harry could be the top backup at each receiver spot next season, then be a starter in 2020.
You can follow Eliot Shorr-Parks on Twitter at @EliotShorrParks or email him at esp@94wip.com!