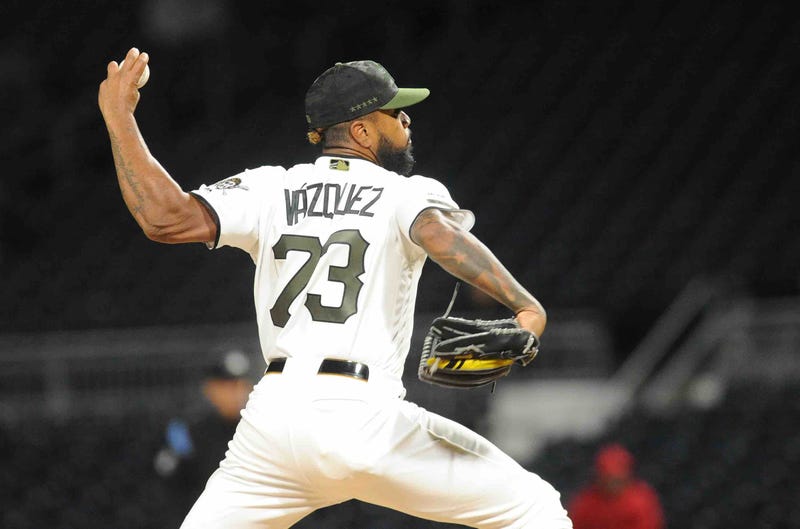 With a record of 7-3, two things are clear about the Phillies so far in this 2019 season.

One is that they have the bats to carry them to the playoffs. They are still averaging 6.30 runs per game so far this season, good for fourth in the majors. Last season the top six teams in the majors in runs scored per game made the playoffs. So bats can indeed carry you to the postseason.

The other thing that is clear about this Phillies team is that the bullpen appears to be an issue. It certainly was on Tuesday night in the team’s 10-6 loss to the Washington Nationals, as they allowed five runs in the ninth-and-10th innings. Starter Aaron Nola certainly played a role in the loss, but the team has to have faith Nola will turn it around. The don’t have to have that same faith about the bullpen.

Chances are Matt Klentak won’t just sit by and watch his bullpen continue to be an issue, considering the money he spent this offseason to make sure his team goes to the postseason and how close the division race will likely be.

It is still early, but here is a look at some potential trade targets for the Phillies to help their bullpen:

Felipe Vazquez, Pittsburgh Pirates: Adding Vazquez won’t be cheap, but he would be a major addition to the bullpen. Vazquez has a career ERA of 2.79 in 274.2 innings pitched with a WHIP of just 1.103. He has 319 career strikeouts to just 89 walks and has allowed just 17 home runs. He is still only just 27-years old and is coming off of an All-Star season in 2018. The Pirates could soon be sellers, and when they do decide to ship off talent, Klentak should be first in line.
Mychal Givens, Baltimore Orioles: Givens has not gotten off to a great start this season, as he has allowed a run in two of his four appearances and has an ERA of 5.79. Still, he would be an upgrade for the Phillies, as his career ERA is just 3.16, and has struck out over three-times as many batters (307) as he has walked (100) in 264.2 innings pitched.
Archie Bradley, Arizona Diamondbacks: After a rough start to his career, Bradley has been extremely solid the last three seasons for Arizona. Bradley has allowed just 33 runs in his last 149.1 innings pitched, as posted a WHIP of 1.041 in 2017 and 1.144 in 2018. Only 26-years old, Bradley could be a long-term piece for the Phillies as well, helping them both this season and over the next few seasons.
Robert Stephenson, Cincinnati Reds: Stephenson has not had a stellar career thus far, posting a career ERA of 5.32 and allows nearly two baserunners per inning with a career WHIP of 1.637. At just 26-years old, however, Stephenson is off to a hot start this season, allowing just one run in 5.1 innings while striking out seven and walking just one batter. He has a WHIP of just 0.750 so far this season.
Drew Steckenrider, Miami Marlins: Steckenrider has a nice mixture of proven ability combined with upside, with a career ERA of 3.54 in 104.1 innings pitched. He has some closing experience as he has finished 26 games in his career, but has only registered six saves. Steckenrider has gotten off to an impressive start this season, as he has appeared in five innings, and held the opposing offense scoreless in four of those appearances. His ERA (7.20) is a bit misleading as he has a WHIP of just 0.800 and outside of one bad inning — four runs allowed against the New York Mets — he has allowed a total of zero hits in his four other outings.
Austin Brice, Miami Marlins: The Marlins are a prime team for the Phillies to pluck some talent from, considering they are always sellers and will be again this season. Brice could be an intriguing option. 27-years old, Brice has six innings pitched this season and hasn’t allowed a single run. His ERA of 0.00 is a bit misleading, however, as he has walked three batters and allowed four hits in those six innings. Still, Brice has had a consistently low WHIP throughout his career (has never topped 1.39 in any of his three previous seasons) and has a high number of strikeouts (78) compared to walks (28).
You can follow Eliot Shorr-Parks on Twitter at @EliotShorrParks or email him at esp@94wip.com!