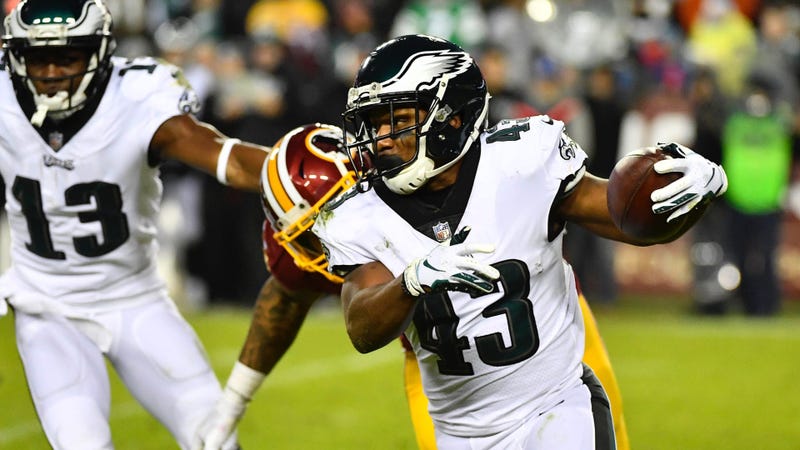 The Eagles made a major addition to their running back group on Friday evening when they signed Darren Sproles to a one-year deal.

Make no mistake about it — Sproles isn’t here to ride the bench for one final season or only return kicks. The running back has always been a favorite of both head coach Doug Pederson and running backs coach Duce Staley, and in coming back, he is almost certainly going to play a consistent role on the offense.

Even last season, after sitting out from Week 1 to Week 12 with a hamstring injury, Sproles ended up playing a big role in the team’s run to the playoffs. He totaled 12 touches in the team’s big win over the Houston Texans. He had 13 carries against the Chicago Bears in the playoffs and had six touches against the New Orleans Saints.

The takeaway from how the team used Sproles last year is clear — if he is healthy, he is going to play.

Sproles' role is pretty clear. He is going to be in on obvious passing downs, will likely be the starting running back when the Eagles run the hurry-up offense and will get a few carries per game. He won't lead the team in snaps many weeks, but it wouldn't be surprising if Sproles  is second each week in playing time among the running backs.

The addition of Sproles shouldn’t impact Jordan Howard’s role on the offense too much. He is going to lead the team in carries and will likely lead the running backs in snaps as well. A strong pass blocker, Howard could still be in on some passing downs, as the Eagles’ coaching staff has said they believe he can make an impact in the passing game.

Sproles could end up really impacting rookie Miles Sanders’ role, however. Sanders missed all of the offseason workouts with a lower-body injury. The injury isn’t considered serious, and he should be ready for training camp, but missing all of OTAs and minicamp your rookie season is far from ideal. Sanders is going to play — that is just the reality of a running back selected in the second round. With Sproles now on the roster, however, the Eagles have a safety net in place if Sanders doesn’t look ready, and the leash could be pretty short for a team that is trying to win it all this year and doesn’t have time to wait for players to develop.

Sproles coming back is also going to create some serious competition at the bottom of the roster at running back.

Heading into training camp, two players were locks to make the team — Jordan Howard and Miles Sanders. That number is now three, as Sproles is a lock as well, barring him deciding to retire due to injury during training camp.

That means after all being on the roster last season, at least one of Corey Clement, Wendell Smallwood, Josh Adams or Boston Scott won’t be making the team. If the Eagles only keep four running backs as opposed to five, all but one of them will be released.

Clement is the closest to being a lock to make the team, assuming he proves he is healthy during training camp. Clement has shown he can make plays out of the backfield as a receiver, still has plenty of untapped potential and is entering only his third season. The Eagles want Clement to make the roster.

Assuming Clement makes it, and the Eagles only keep four, the rest will be cut. If they do indeed decide to keep five as they have in past, each of them have already built a case to make the team.

Adams played a significant role last season after winning the starting job midway through the season and is entering only his second year. Smallwood has always been a favorite of the coaches, is a good receiver out of the backfield, runs hard and can play special teams. Scott has been talked up by the coaches all offseason and has the potential to be an impact player on special teams.

Who makes the team will be decided in training camp, but as of now, Smallwood likely has the edge. Smallwood has proven in the past he can step in when needed and perform at a fairly high level as a backup. Smallwood averaged 4.2 yards-per-carry last season and 8.2 yards-per-reception last season to go along with five touchdowns. Fans might not like him, but he has earned the trust of the coaching staff, something Adams or Scott have yet to do.

How the running back position will end up shaking out isn’t yet known, but what is clear is that the addition of Sproles — despite the fact he has played in only nine games the last two seasons — as a major game changer at the position.