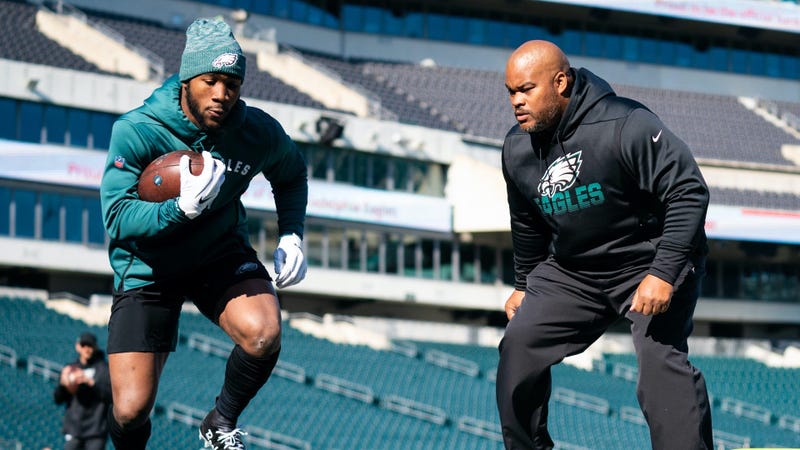 Will this finally be the time the Eagles give Duce Staley a promotion?

Owner Jeffrey Lurie, general manager Howie Roseman and head coach Doug Pederson have twice had the chance to do it, passing on the chance to hire Staley as head coach in 2016 and declining to hire him as offensive coordinator in 2018.

Now they have another chance. Although there are a number of qualified candidates, if the Eagles don’t promote Staley this time, you have to wonder if it will ever happen — or how long Staley will be happy in a place where it appears he has reached his professional ceiling.

Here are some potential pros and cons of the Eagles potentially hiring Staley as Groh’s replacement:

Con: Not a quarterback

The obvious reason the Eagles might pass on Staley is that there is one common theme among  all of the team’s big hires. Doug Pederson, Mike Groh, Frank Reich, John DeFilippo — they have all played quarterback at one point in their career. It is clear the Eagles value that in their top decision makers on offense, and considering the importance of building around Wentz, it is understandable that they do. Staley might be able to help Wentz develop, but considering he has no background with the position, it is fair to wonder if the Eagles will give him a chance. If the Eagles pass on Staley and don’t hire a coordinator with a quarterback background, then it will be crystal clear that Staley might never get a real chance at moving up the ladder.

The Eagles’ offense has been frustrating to watch at times over the last two seasons, but they did end 2019 on a high note, save for the disappointing playoff loss. There is an argument to be made for keeping the offense the same save for a few minor tweaks and riding the momentum quarterback Carson Wentz and the offense had at the end of the season. If the Eagles do go that route, Staley could be the man for the job, as he is very familiar with the offense and the personnel the team already has. He knows what players can and can’t do, he knows what players are comfortable with what plays and he knows what hasn’t worked. Promoting from within didn’t work with Groh, but perhaps the results will be better with Staley.

Staley would still be in the building, but we all saw the drop-off in receiver play when Groh went from receiver coach to offensive coordinator. The Eagles will likely go into next season with two young players in the their backfield in Miles Sanders and Boston Scott. It is crucial to the success of the offense that they continue to develop and take a big step forward next season, when both will be walking into a full-time role they have not had before. Replacing Staley, who has been arguably one of the best running back coaches in the league, will not be easy.

Con: Has been in the building

Knowing the personnel is a positive, but at the same time, this Eagles’ offense appears to be in desperate need of a fresh set of eyes. They have not brought in an offensive coach of significance since this original staff was put together in 2016. The offense doesn’t need a complete overhaul, as it was proven at the end of 2019 that when Wentz is delivering accurate, on-time passes the offense still works. Bringing in a coordinator with a fresh set of ideas, or a different offensive background than Pederson, however would certainly have its benefits.

This won’t help Wentz develop, or bring a new look to the offense, but it is important — the players in that locker room are big fans of Staley. From the running backs to the offensive linemen to the receivers and every other position that works with him, Staley has the respect and ear of the locker room. That matters, especially with a head coach like Pederson who really values the culture of the locker room and in the building overall. Promoting Staley would not only excite the players, but it would also likely be a moral boost to the staff, and a sign that Pederson will continue to return those in the building who work hard and excel at their jobs.