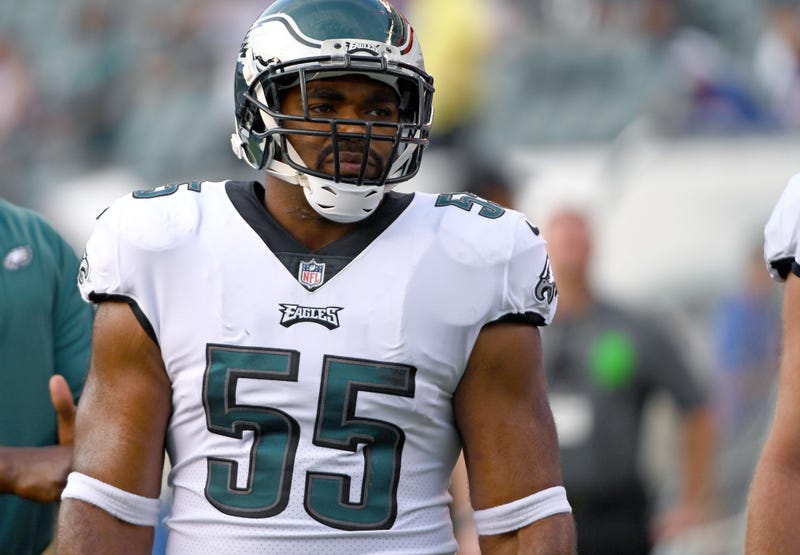 The Eagles announced on Friday morning that they have re-signed defensive end Brandon Graham to a three-year contract, a move that will almost guarantee he ends his career with the team that drafted him.

Graham has the seventh-most sacks (42.5) in franchise history and leads the team with 61 tackles for a loss and 12 forced fumbles since 2014. Although he is coming off of a down season, where he finished just 4.0 sacks, Graham finished with 9.5 sacks in 2017 and was one of the best defensive ends in all of football.

“This is a great feeling for me right now, man,” Graham said via the team's official website. “My family and I, we didn’t want to go anywhere else, so to get this done, that’s the best feeling. I’m over here smiling ear to ear. I’ve been doing that since I heard the news.”

This is a move the Eagles had to make. The team’s defensive line has been one of the best in the league over the last few seasons, but with Graham set to hit free agency, they were in massive danger of taking a step back along the line. Graham has arguably been the team’s best defensive end over the last few seasons, and now that he is back, the Eagles can feel confident in a trio of Graham, Michael Bennett and Derek Barnett.

“Staying with the Eagles was the right thing to do. I think this is a great deal. We weren’t too far off before (in negotiations that had previously taken place) and right now I’m just excited," Graham said. "I’ve done well with the money from before and this was done in a way that I can do right with my family and I can go out there and continue my legacy on the field.”

Graham and the Eagles striking a deal shouldn’t be surprising. Graham made it clear at the end of the season that he really wanted to be back in Philadelphia, and as mentioned above, the Eagles needed him back. Unlike last time around, when Graham fielded an offer from just one other team, the defensive end was likely going to be the top player at his position in free agency. By signing now, and not testing the free agency market, Graham made it clear that he was never really going to consider leaving Philadelphia.

One major reason to believe that Graham will have a bounce-back season is that he enters this offseason healthy. Last year, coming off of the Super Bowl win, Graham underwent ankle surgery and missed almost all of training camp. It was clear the missed time had an impact on him at the start of the season. Now healthy, Graham should enter training camp ready to go and in much better shape than he was last season.

“I talked with my family and said, ‘Hey, I’ve got a lot of things I want to accomplish in Philly. I want to get on that wall (at the NovaCare Complex) for the Pro Bowl, I’ve got a couple of things … being there for this long, hopefully one day I’ll be in the Hall of Fame," Graham said of the decision to come back. "I want to do something big in Philly. Right now, I’m just excited because we get to go back and compete. We’ve got unfinished business together as a team."More to come...
You can reach Eliot Shorr-Parks on Twitter at @EliotShorrParks or email him at esp@94wip.com!