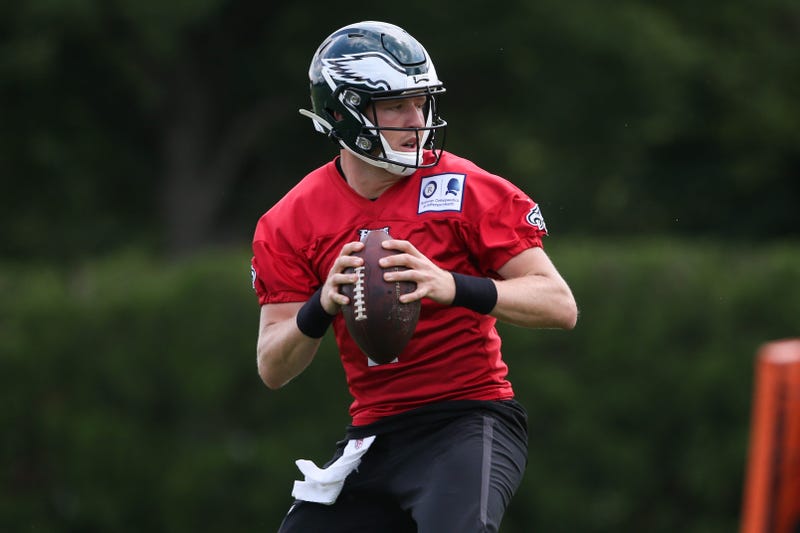 It is the inconvenient truth that most Eagles fans either prefer not to acknowledge or have simply blocked out —quarterback Carson Wentz has shown over his first three seasons that he is very injury prone, ending the last two seasons on the bench while the team made a playoff run.

Wentz’s history of ending up on the injury report makes one of the most important jobs on the Eagles’ roster his backup, a role that for the first time in two years, won’t be occupied by Nick Foles, but instead will belong to Nate Sudfeld.

Sudfeld, 6-foot-6, 217 pounds, is a very interesting prospect at quarterback. He was not viewed as an elite quarterback prospect coming out of Indiana in 2016, but after two years being coached up by the Eagles, he has become one.

“I'm very confident in Nate. I like what he's done this spring. He's taken another step in his growth with our offense, with our team,” head coach Doug Pederson said. “Training camp's going to be another step for him. When you start putting the pads on, you start playing games.”

The idea of Sudfeld being considered an elite quarterback prospect might sound crazy, considering he was a sixth-round pick three years ago, but it shouldn't be. At 6-foot-6 with a strong arm, the ability to move around the pocket and throw on the run, Sudfeld has all of the physical tools a team would want from their quarterback. With two years of coaching in the NFL from arguably the best quarterback-friendly coaching staff in the NFL, Sudfeld should have the mental part of the position down as well.

Other teams around the league have taken notice, as the Indianapolis Colts -- who have one of the best front offices in the NFL -- tried to steal Sudfeld away from the Eagles in 2017. The Eagles placed a second-round tender on Sudfeld this past offseason, a sign that they knew other teams were willing to sign Sudfeld away if the price was right. It is also important to remember that the Eagles went into the 2017 postseason with Sudfeld as their top backup, electing not to bring in a veteran quarterback when Wentz went down with a torn ACL.

Pederson was confident in Sudfeld being one snap away from playing in the Super Bowl, which is why it shouldn't be surprising he believes Sudfeld is ready for the job.

“I think he's got the right demeanor. He's perfect for that role from the standpoint of when he's in there. I mean, he steps up and leads. He's not looking to push Carson aside,” Pederson said. “He's there to help Carson and to help him be as successful as possible. But at the same time, he's getting himself ready to play.”

The Eagles have said repeatedly that they wanted to bring in competition to push Sudfeld, but so far, that competition has only turned into a fifth-round pick in Clayton Thorson and the far-less talented Cody Kessler. The result is that baring a complete collapse by Sudfeld in training camp, the Eagles will go into next season as a team with Super Bowl aspirations and Sudfeld as their backup.

Although his snaps have been limited with the Eagles, Sudfeld has shown clear signs of improvement over the last two seasons. He had a strong showing in preseason last year, throwing five touchdowns in four games (with three interceptions) while throwing for 524 yards. While there is still room for improvement, Sudfeld made some elite throws last year, including a perfect throw out of his own end zone about 50-yards down the field to receiver Shelton Gibson.

Sudfeld finished the season on a high note, throwing a touchdown on his only attempt in the regular-season finale against Washington.

Now it is time to see if Sudfeld can step into the very big shoes left open by Foles’ departure to Jacksonville. Although Wentz is healthy now, it wouldn’t be surprising if Sudfeld was forced into action this season, whether it be for an extended amount of time, one game or a few plays.

When he is, it will be interesting to see how the team does. The Eagles’ coaching staff and roster have shown they can win without Wentz. The idea that they could do it again with Sudfeld is not crazy, considering the tools he has and time he has spent in the system. All Sudfeld needs at this point are reps in the regular season, something the team is hoping he doesn't get this season.

“He and I've had, you know, really good conversations and I think he benefitted the most probably from watching Nick play, coming off the bench, being the backup role, how to handle that how to handle and deal with Carson, how to help coach Carson, how to study with Carson,” Pederson said. “And he had a pretty good seat for the last couple years. And now it's his time to really take that next step.”