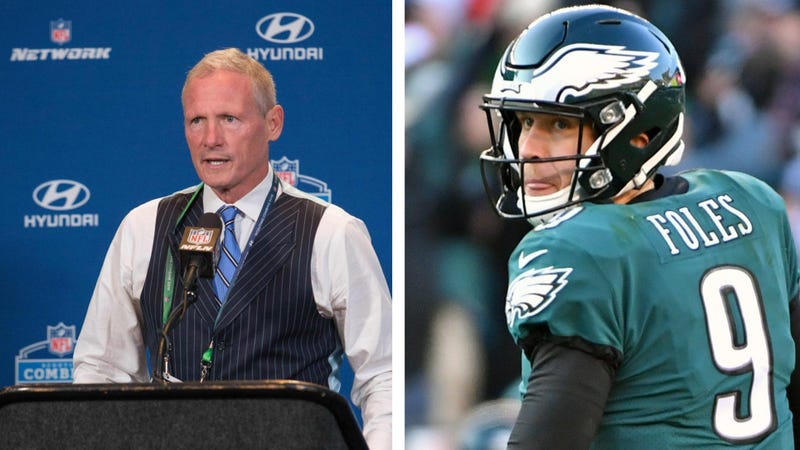 The Eagles have a playoff game on Sunday against the New Orleans Saints, but that isn't stopping teams from salivating at the idea of poaching away their starting QB.

In a piece for Bleacher Report, NFL reporter Mike Freeman wrote that after speaking with scouts around the league, there will likely be plenty of interest in Nick Foles this offseason—and even mentioned a possible landing spot for the Super Bowl MVP.

"There are a lot of teams that will shoot their shot at Foles," one NFC West scout said, "and [should Philly keep him] will be willing to part with substantial draft picks to do it."

There is already rampant speculation about where Foles will end up. One scout believes Raiders coach Jon Gruden will use some of the booty from the Khalil Mack and Amari Cooper trades (two first-rounders for Mack and one for Cooper) to make the Eagles an offer they can't refuse."

Foles, 29, has a $20 million team option for the 2019 season, but can pay back $2 million to the Eagles to become a free-agent instead. The Eagles could franchise tag him, which would allow them to trade him and recoup a draft pick for him.

"I do think they'll be able to trade him," Ian Rapoport of the NFL Network said of Foles on 94WIP. "My guess is they end up working with Foles and coming up with some solution where he lands at a great place, and he probably ends up getting a contract extension with that."

The idea of the Raiders making a run at Foles is just speculation at this point, but it is interesting. The Raiders have quarterback Derek Carr currently on their roster, but could move on from him to save cap space. It is also fair to wonder if head coach Jon Gruden is truly committed to Carr as his franchise quarterback.

Foles would seem to be a perfect fit for Gruden, as he is not a quarterback that likes to improvise, and would simply run Gruden's offense. Another link for Foles to the Raiders is new general manager Mike Mayock, who has been around the Eagles for years, calling their preseason games and spending plenty of time at their practices. The idea of moving Foles to the AFC would also likely be very appealing to the Eagles, as opposed to seeing him join an NFC team.

The same logic could also be applied to Wentz, should the Eagles do the unthinkable and move their franchise quarterback in favor of keeping Foles.

Of course, as long as the Eagles keep winning, the idea becomes less and less crazy—and it might not seem crazy at all if Foles goes into New Orleans and beats the Saints.