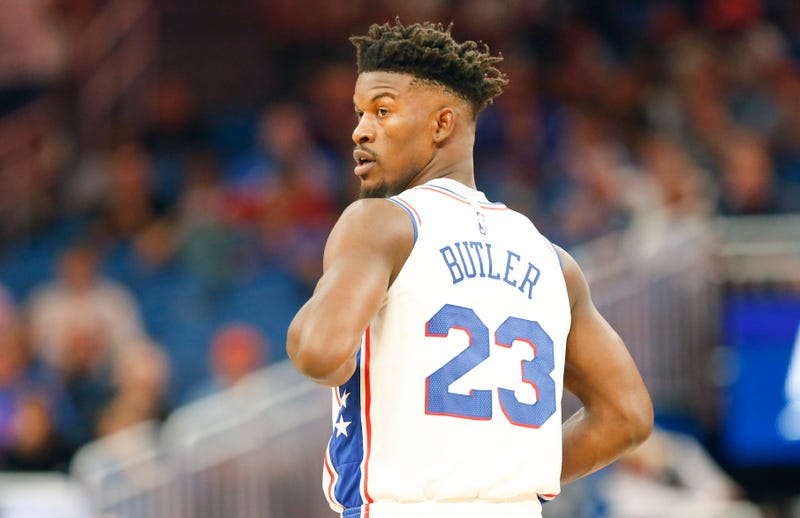 I respect that the Sixers took a chance on Jimmy Butler, but I’ve seen enough in his short time here to know that this isn’t right. It doesn’t matter what they traded for him, the team would be wise to see what Butler is worth in a trade before February’s deadline.

Butler has been the sum of all fears that I warned of as Elton Brand took over the Sixers. In the two months since the trade Butler has been pretty effective on the court, but doesn’t pop offensively or defensively like you’d have hoped. Not only is he clearly not as explosive or effective as he was just a few years ago, Butler has quickly shown a penchant for not just wanting to win, but wanting the winning to revolve solely around him.

The team has had an effective offense since Butler’s arrival, but that didn’t stop him from one of his famous demands that the ball run more through him in isolation and pick and roll sets. While Brett Brown downplayed the conflict that was reported by ESPN, it hasn’t been his only blow up with the team, and similar issues in both Minnesota and Chicago are well-documented.

After being traded from the Bulls to the Timberwolves, Butler clearly outlined that either the ball runs through him or it doesn’t, and a combination of the two shall not exist.

“It was either, ‘We’re going to build the team around me for a little bit and allow me to distribute the basketball, iso in pick and roll. Or you go with Fred (Hoiberg) – go up and down, shoot a lot of threes, that type of stuff. That spread type – kind of Golden State-esque, you know what I mean? They went that route, and that’s all I’m saying, and that’s fine,” Butler told USA Today after he arrived in Minnesota.

The Sixers run pick and roll less than any other team in the league. Even though they have started to, and should have run more pick and roll through Butler, the team was never going to resemble what Houston does with James Harden, nor should it. The best player on the Sixers is Joel Embiid, not Jimmy Butler, and a team that chooses to focus their entire offense around Butler is not a team that’s going to win an NBA championship.

Butler sees the offense as one of two things, either it’s the way he wants it, or it isn’t, with no in between.

“Star hunting” led the Sixers to Butler, who had blown up with his second straight team and decided he could not see his future in Minneapolis. The team went into the trade eyes wide open, with all of Butler’s warts clear as day, but decided that their imperfect situation (a depleted asset inventory due to Bryan Colangelo’s mismanagement) warranted the risk on an imperfect star. It was worth a try.

Trading Butler would be a difficult decision to make for the Sixers not just from a basketball standpoint, but from a public relations standpoint. At the end of the day, they need to do the best thing for the future of the franchise, and a giant contract for Jimmy Butler is almost certainly not that.

With the number of teams that have cap space this summer, there is almost certainly at least one other team that will offer Butler a four-year max, which means the Sixers will have to offer Butler the five year, $190 million contract that only they can offer to keep him. If they do that, I am almost certain they’ll regret it. Butler will turn 30 years old prior to the start of next season, and the Sixers would be paying potentially franchise crippling money to a disruptive personality who is on downside of his prime.

There are a few times when a contract like that is worth it. The player could be actually worth more than the contract because of his play, like James, Durant, Curry, or Harden and the like. The player could be the missing piece to put you over the top, even if he isn’t quite on that level, sort of like the Rockets felt about Chris Paul. Or if you’re a small market team that knows a championship is unlikely, but having a solid team revolve around a good player is the best you can do.

This situation is not any of those.

Butler’s arrival has widened the perception that the Sixers' window to win is the next two or three years, and has been the fuel for a lot of chatter around potentially trading Ben Simmons. Trading Simmons to capitalize on the backside of Butler’s prime would be a huge mistake. There are fit and personality issues between Simmons and Embiid, but if you’re making me bet, I’ll bet on Simmons developing into something they’ll regret moving on from just to capitalize on Butler’s disintegrating prime.

Moving on from Butler would also mean a gut check for both Simmons and Embiid, who need to realize the best version of their futures includes the other. While the Sixers are better when they’re both on the floor, it’s pretty clear that the basketball fit between the two is shaky, and needs to improve.

There cannot be another summer when Simmon and Embiid are not working with each other on ways to make each other better. Instead of imagining what it would be like if each had his own team built around himself, the young stars must commit themselves to figuring out ways to make the other the best version of himself.

That will mean time in the offseason and sacrifice during the season. It will mean the both players will have to show true leadership through that work and sacrifice begin to build a culture that other players will follow, something that is missing from the team currently. It means that until he becomes an able shooter, sometimes Ben Simmons as a big who sets screens and rolls and posts up might be more helpful than Ben Simmons the point guard; so much so that acquiring an actual point guard who starts next to Redick (please sign Malcolm Brogdon) is a really good idea. It means that Joel Embiid might have to give up a few post up opportunities to stand on the perimeter as a floor spacer.

No one is saying that Joel Embiid and Ben Simmons are mortal enemies, and no one says that they have to be best friends. But they need to have some sort of stake in each other’s success, and if that’s not going to be because of a personal relationship, it’s got to be on the court. They don’t have either as of yet. That, more than anything else, will be the the determining factor in whether Sixers compete for a championship or don’t

Kevin Durant and Russell Westbrook were two great players that carried a team to the Finals, but when push came to shove, the fact that they were just being great at the same time, rather than great together, made Durant’s choice to leave Oklahoma City a relatively easy one.

The Sixers would be wise to forget about the sunk cost of Butler (Robert Covington and Dario Saric), and make the decision that gives them the best opportunity and most flexibility moving forward. The best opportunity and most flexibility does not include creating a timeline that revolves around Butler, but doubling down on the futures of Joel Embiid and Ben Simmons. They would be wise to call every team who was interested in Butler in the first place, the Houston Rockets, New Orleans Pelicans and Miami Heat, and see if there are any other teams willing to make a bid.

What Butler’s value would be on the trade market would be is unclear, but it’s almost certainly better than just letting him walk this offseason. The Ringer’s Kevin O’Connor mentioned that the Atlanta Hawks would be willing to trade Taurean Prince, and perhaps a three team trade in which the Hawks receive the 2021 Heat pick and an asset for another team, and the Sixers receive Prince, could be something that works. Prince is an able three point shooter, a good defender, and a better creator than Robert Covington was.

Maybe the Houston Rockets, on the heels of James Harden’s legendary run, still think that Butler would increase their chances of a championship. Perhaps Eric Gordon, and a first round pick or two (they reportedly offered the Timberwolves four picks) would get the job done. Gordon is a good shooter and would be an interesting fit in the starting lineup with Redick, Simmons, Embiid and the ghost of Wilson Chandler.

The Miami Heat were reportedly interested in Butler, and maybe a package involving Josh Richardson is something they’d be willing to discuss. At worst, getting a couple of players that might fill out the rotation this year and expire at the end of the season to give the team more cap space to work with is still better than paying Butler.

Giving up on Jimmy Butler is not giving up on the chase for a championship, but a commitment that the guys who will lead them to that championship are Embiid and Simmons.

It took a lot of guts to trade for Jimmy Butler, and even though it didn’t work out, it was probably the right thing.

It will take even more guts to trade Butler, but it seems pretty clear that once again, it’s the right thing.