That line can mean many different things for many different moments in life. For NFL executives, it should be a mantra to guide roster building. That’s especially true at the quarterback position.

For Eagles Vice President Howie Roseman, there was no bolder (or dumber, depending on your perspective in the moment) draft pick in his tenure than selecting Oklahoma quarterback Jalen Hurts with the No. 53 pick in the 2020 NFL Draft. I was on the air at 94WIP the moment it happened. I’ll never forget my reaction (stunned) and the callers that soon followed (even more stunned). It was instantly the most controversial pick in Roseman’s decade-plus reign atop the Eagles organization.

It’s now looking like the best pick he’s ever made.

Before getting to all the reasons why Hurts was the right player to bet on and why his current NFL MVP-caliber play represents arguably the most valuable contract in the sport right now, let’s remember why the Hurts pick took such guts to make: The Eagles had handed Carson Wentz the biggest contract in franchise history less than two years prior. 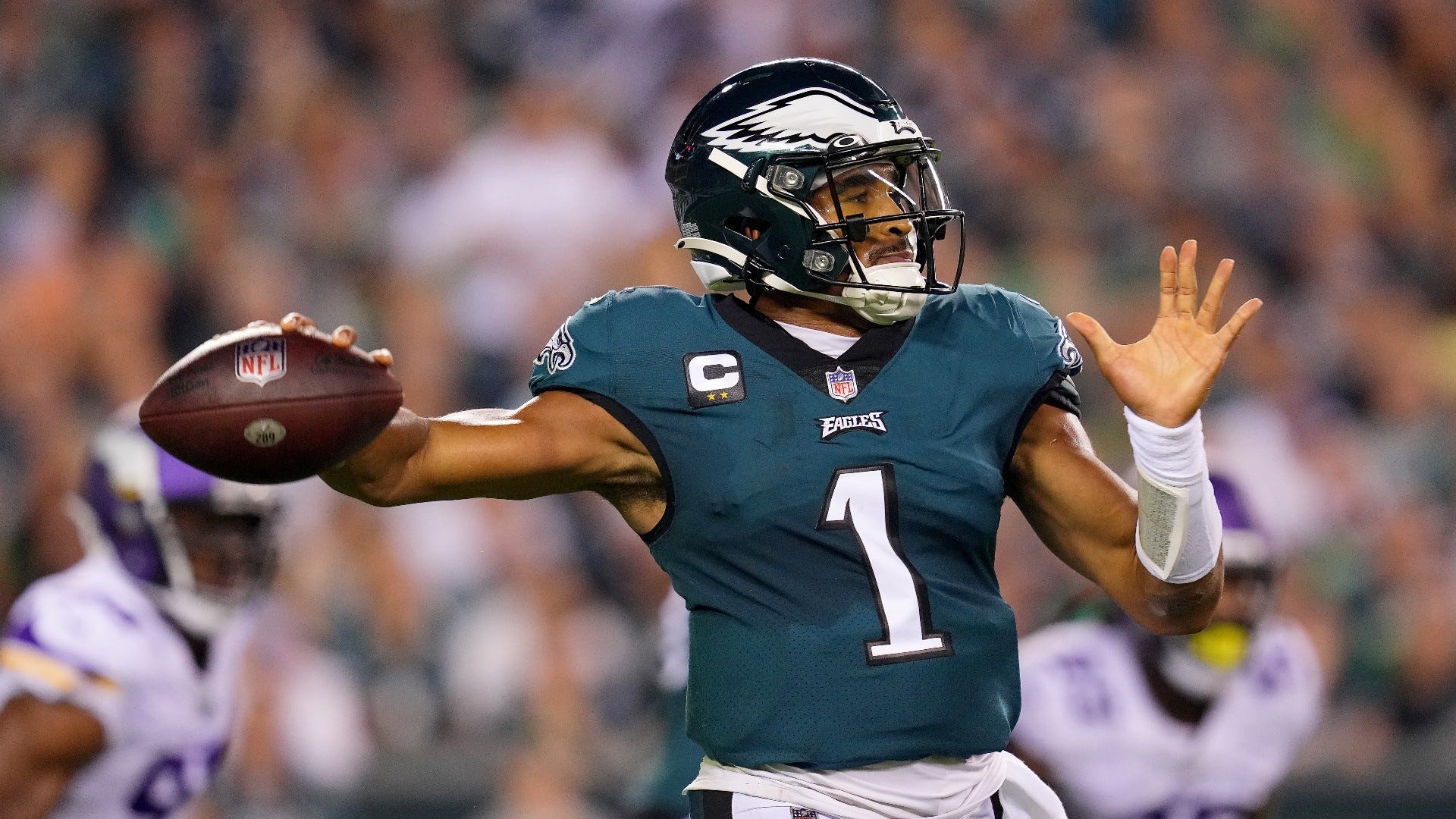 At the time of draft night, Wentz was coming off leading the Eagles to the NFC East title. He played his best football in December. If not for a concussion in the Wild Card Game vs. Seattle, perhaps Roseman’s one-time bold No 2 overall pick from North Dakota State could have won his first playoff game.

But underneath the surface, I truly believe Roseman saw issues that still persist to this day with Wentz’s game and leadership. The 2019 season was erratic, including a 5-7 start. Wentz’s mobility was waning. His accuracy was suspect. His leadership stunk. During that season, Amazon chronicled the Eagles. In one episode (which, to be fair, was likely highly edited) Roseman looked like he saw a ghost in a Lincoln Financial Field luxury suite when Wentz missed a wide-open receiver by 10 yards. Perhaps that’s when Rosmean decided to pursue the most highly-talked about quarterback hedge in Eagles history.

By late April, Hurts was on the board at No. 53. Roseman pounced. The next week was one of the poorest attempts at damage control an organization could do, right up there with the Phillies explaining trading away Cliff Lee to restock the farm system. Anyone who believed Hurts was simply taken to be a cost-effective, long-term back up had their head in the sand. Teams, especially smart teams like the Eagles, don’t use a resource like that on a player that has very little chance to play meaningful snaps. Roseman was hedging on his once-held belief in Wentz because of a conviction in Hurts’ ability, leadership and make up.

It was the right call.

Hurts took the job by late 2020, and hasn’t given it back. At this rate, he could be the Eagles starting quarterback for a long time. Monday night’s electric performance (26-of-31, 333 passing yards, 1 passing TD, 1 INT, 108.7 passer rating, 78.3 QBR; 11 rushes, 57 rushing yards, 2 TD) vs. the Minnesota Vikings was incredible to watch. Hurts put on a quarterback clinic in the first half, throwing with accuracy, rhythm, timing and anticipation, while also displaying dynamic running ability. It was like watching a young Russell Wilson or vintage Steve McNair.

If Hurts keeps up the level of physical and mental play we’ve seen out of him over the first two weeks of the season, he’ll be in the discussion for the 2022 NFL MVP award and the Eagles will be favored in almost every game this year. Hurts, regardless of whether he can actually beat out Josh Allen or Patrick Mahomes for the award, could currently be ranked as the most valuable player (on a dollar-for-dollar basis) in the sport today.

The 24-year-old carries a $1.64M cap hit this season, ranking 54th among all quarterbacks in a quarterback-centric sport. Some other quarterbacks that currently cost their teams more than Hurts cost the Eagles: Andy Dalton, Geno Smith, Mason Rudolph, and Kyle Allen. Hurts’ cap hit is nearly $30M less than Kirk Cousins, a player he thoroughly outplayed on Monday night. The figure is a fraction ($26.6M less, in fact) of what Wentz is on the Washington Commanders books for this season.

Here’s a sample of some players Roseman has on the books with that extra $30M that other teams don’t have the luxury of under the cap right now: Darius Slay, Jason Kelce, A.J. Brown, Haason Reddick, C.J. Gardner-Johnson and James Bradberry. This is a roster-building clinic, but it only works because of the budding star making almost nothing relative to his peers across the league this season.

Roseman had a poor run after the Eagles Super Bowl. Mistakes were made. Commitments to older, declining players happened too often. The franchise lost its way. Some thought the Hurts pick was a symbol of Roseman trying to be the smartest person in the room, a trait that had burned the franchise too often (as chronicled early in the MNF broadcast with the Justin Jefferson debacle).

But the Hurts pick was actually the opposite: It was the first step in the Eagles rebuild that manifested into a Super Bowl contender two years later. Hurts’ leadership filled the void left behind by Nick Foles. His attitude was what the locker room needed. His dual-threat ability has been molded by two separate coaching staffs. His unflappable demeanor was made for Philadelphia.

The 2022 Eagles, led by Hurts, look like a legitimate NFC contender. None of this happens if not for the bravest pick in Roseman’s tenure. His hedge was correct. His gut was spot on. His bet has paid off.

Hurts was worth it, and had made Roseman look like a genius for being so bold two years ago.