It's been seen as fait accompli that Zach Ertz wouldn't return to the Philadelphia Eagles for the 2021 season after he was overcome with emotions during his final press conference last season. But to this point, there's been no trade or release.

The most productive tight end in franchise history, Ertz had just 36 catches for 335 yards in 11 games last season, with his most notable moment coming is September, when he general manager Howie Roseman got into what was called a "heated" discussion following a practice.

With that in mind, an unnamed veteran player has an idea of why Ertz, aside from injuries, is coming off his worst year as a pro.

"He's probably tired of the bullcrap in Philly," a veteran NFL offensive player said of Ertz to ESPN's Jeremy Fowler. "With a fresh start, he'll still be great."

Ertz entered last season seeking a new contract, one that he hasn't received. Now 30, Ertz has apparently changed his tune on getting a new deal right now, with Mike Garafolo of NFL Media reporting in March that the tight end is now content to play out the final year of his deal, when he's due $8.5 million.

Increasingly, though, you wonder if the Eagles won't end up releasing Ertz, rather than carrying his $12.5 million cap hit. Releasing Ertz would leave the Eagles with just $4.2 million in dead cap money, and it would allow them to get a full look at Dallas Goedert, a former second-round pick who is also in a contract year. Ertz would certainly have to take less money in 2021 if released, but the chance to go to a contending team - perhaps the Buffalo Bills - would likely be both more enjoyable and profitable in the long run. 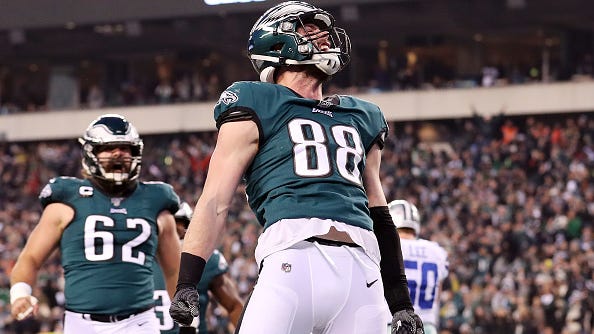 Execs, coaches and players rank Dallas Goedert as No. 6 tight end in NFL