The Philadelphia Phillies announced Thursday afternoon that shortstop Didi Gregorius had been released, with infielder Jean Segura being activated off the 60-day injured list.

President of baseball operations Dave Dombrowski explained the decision to release the veteran shortstop in an appearance with Jon Marks and Ike Reese on SportsRadio 94 WIP.

"At this point, no," Dombrowski said when asked if the Phillies had considered keeping Gregorius as a bench piece and/or depth in case someone got injured.

"We had talked about this, when Segura got back, what we would do eventually. But once we picked up Edmundo Sosa from the Cardinals, and then with Stott moving over to shortstop, having two left-handed hitting shortstops was not our preference if we could avoid that. And Sosa is an outstanding defensive shortstop. In fact, he's out best defensive shortstop that we have at this point. So the fit was much better with moving Stott to short to have Sosa as the backup. So that really made the most sense to us."

Gregorius, 32, slashed just .210/.263/.304 with one home run and a .567 OPS in 214 at-bats this season for the Phillies. Given that he had -6 defensive runs saved at shortstop and doesn't really play any other positions, Gregorius wouldn't have offered much value as a bench piece.

The aforementioned Sosa -- acquired in a trade for reliever JoJo Romero last weekend -- won't provide a ton of offense, but is an excellent defender that can play shortstop, second base and third base. And beyond that, the Phillies evidently determined that Yairo Muñoz and Darick Hall would provide more as bench options than Gregorius would have. 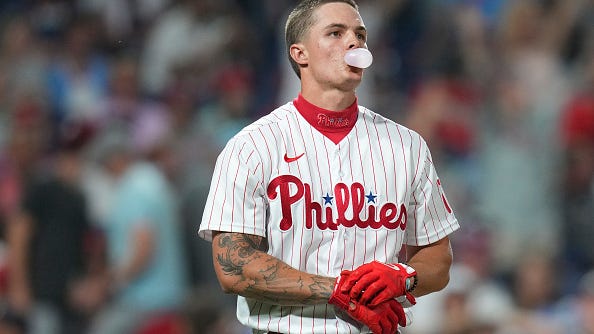