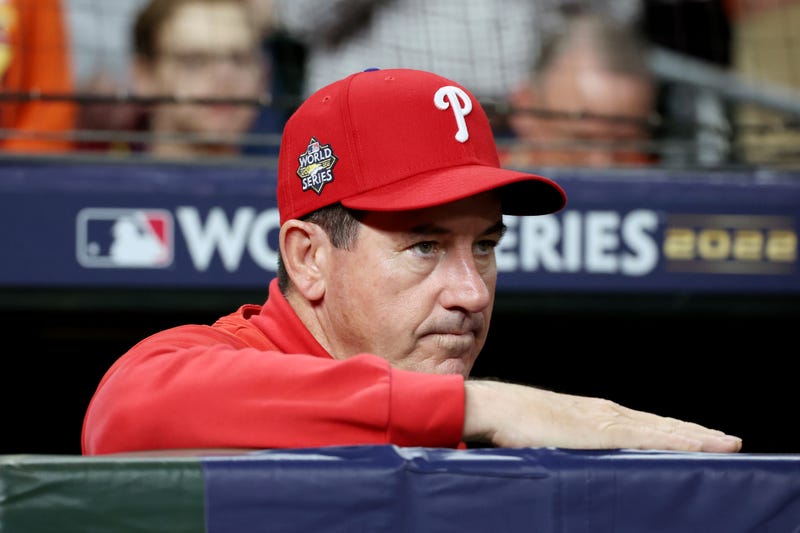 Phillies manager Rob Thomson looks on from the dugout prior to Game 6 of the 2022 World Series between the Philadelphia Phillies and the Houston Astros at Minute Maid Park on Nov. 5, 2022, in Houston, Texas. Photo credit Mary DeCicco/MLB Photos via Getty Images
By Dave Uram, KYW Newsradio

PHILADELPHIA (KYW Newsradio) — Is Phillies manager Rob Thomson one of the most handsome managers in Major League Baseball? His wife doesn’t think so.

Gambling.com recently compiled a list of the most handsome managers in baseball, and Thomson finished second behind Mets manager Buck Showalter.

According to Yardbarker, the list used the Golden Ratio Face app to compile scores, which ranks people based on their facial symmetry and structure — take that with a grain of salt.

Did not expect this in my morning inbox, but here we are. pic.twitter.com/daDOQsnehR

Thomson and some Phillies players are in town this week for community service events. While chatting with media on Wednesday, he was asked about the list.

Thomson said his wife had a quick, witty response: “I came out and I said, ‘Hey listen, Michele. You know how lucky you are? I’m the second most handsome [manager] in baseball.’ And she was cooking dinner and she didn’t miss a beat. She turned around, she said, ‘So everybody else must have been tied for first.’ ”

Stunning skipper? @Phillies manager Rob Thomson was recently named the second most handsome manager in all of MLB by https://t.co/0FKzFDy1rK. Thomson's wife? Not too impressed - take a listen to Thomson earlier today: pic.twitter.com/FQ6uSGhYhG

Thomson got a good laugh out of it.