Every time Andrew Wiggins plays against the Minnesota Timberwolves, he’s gotta be thinking: Look at me now.

The franchise took a chance on him, trading for the 2014 No. 1 overall pick less than a month after the draft, before he could suit up for the Cleveland Cavaliers. The Wolves set him up for life with the five-year, $148 million max contract offer in 2017 that he’s playing out this season. But they also were the ones who traded him away in 2020.

For the first time since winning his first NBA championship with the Warriors, Wiggins returned to Minnesota on Sunday. Wiggs and the defending champs went wild in the first quarter, shooting 76 percent and scoring 47 points, their best for an opening period. Though things got a little bit closer than Golden State would have liked in the fourth quarter, the Dubs ultimately cruised to a 137-114 victory.

It only took about 10 seconds for The Champ to announce his arrival, as Wiggins started off the game with a left-handed alley oop from Draymond Green. Wiggins went 4-of-4 from the field and 2-of-2 from 3-point land for a perfect 10-point start in the first quarter.

“That was amazing,” Wiggins said with a laugh. “Great way to get the game started.”

Despite all the expectations that come with being the top overall selection, Wiggins is a ‘We’ not ‘Me’ guy. In that first quarter, you could see why he’s flourished while being surrounded with other top-level talent, a luxury he couldn’t enjoy in Minnesota.

Some scoffed when the Warriors traded for Wiggins and his max contract. But Wiggs and Jonathan Kuminga, acquired with the pick from the Wolves in a deal centered around guard D’Angelo Russell, are doing just fine. Wiggins is so happy that he gave the Warriors a below-market rate for his four-year, $107 million extension agreed upon this past offseason.

Wiggins has been able to redefine his game since joining forces with Steph Curry, Klay Thompson, Draymond and Kevon Looney. This year they’ve been the NBA’s most efficient quintet and Wiggs is right in the middle of it. The 27-year-old ironman often takes the opposing team’s toughest player to guard while being opportunistic on offense, a role Klay used to occupy.

While Thompson has been rounding into form lately and become more reliable, Wiggins has been the team’s most consistent second scoring option behind Steph all season long.

“We’re finding out the right rotations, what works, what doesn’t work,” Wiggins said. “It’s different team from last year. It took a little bit to figure out what we needed to do, and I feel like we’re figuring it out. We’re not all the way there yet, but I feel like we’re doing a lot great things on the court.”

This season he’s made notable strides in two major areas: his 3-point shooting and his rebounding. Wiggins said he’d be focused on boards this season after averaging 8.8 rebounds per game in the Finals. Through 19 games played this season, Wiggins is averaging 5.5 rebounds per game, up a full rebound from his 2021-22 and career average (4.5).

His shooting has been the biggest development, as Wiggins is now shooting at a scorching 44.1 percent clip, pushing his overall shooting to 50.2 percent. He nailed 3-pointer over his friend and former teammate Karl-Anthony Towns in the third quarter as it appeared the Dubs were gonna pull away. Wiggins finished with 17 points on 7-of-12 shooting.

After the Wolves cut it down to 10, the Warriors ultimately won the game on a barrage of late 3-pointers from the Splash Brothers. Klay hit back-to-back trifectas with less than four minutes left to all but end it.

The Warriors are now 5-1 since Draymond Green held a team meeting to honestly discuss the team’s early-season struggles. Wiggins said he thinks the meeting was a key turning point to the season for the Dubs.

“I do,” Wiggins said. “We just addressed everything that needed to be addressed. After that meeting, we knew what we needed to do to be ourselves and take this team and this organization to the next level this year. We had a great year last year, obviously, winning the championship and this year’s that’s what we’re aiming for.” 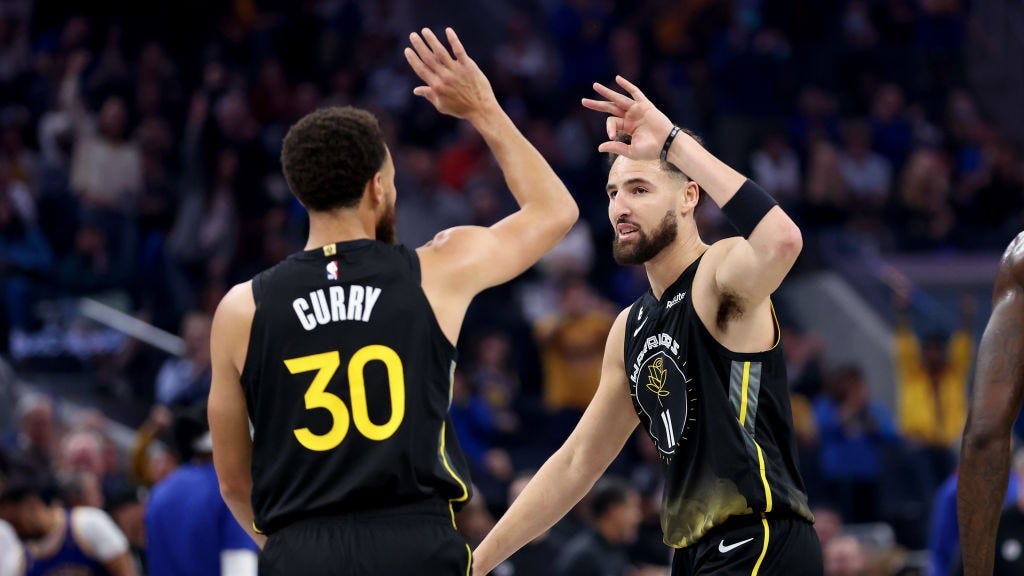