Over the next few weeks, NBA playoff contenders will pair up with veterans who are bought out of their contracts by other teams.

Players need to be waived by 2 p.m. PT on March 1 in order to be on playoff rosters, so there are still a couple of weeks left before the buyout market is completely set. Shams Charania of The Athletic reported that a "slew" of teams would be interested in Goran Dragic after agreed to a buyout with the San Antonio Spurs Tuesday.

So, does the 35-year-old backup point guard make sense for the Warriors? The Athletic’s Anthony Slater discussed the possibility Tuesday during his appearance on 95.7 The Game’s “The Morning Roast”. You can listen to the full interview above.

“I don’t think Dragic is a need, unless you want to really minimize Jordan Poole,” Slater told hosts Bonta Hill and Joe Shasky. “I just don’t think it’s the time in Jordan Poole’s career to minimize him more, and turn him off. Goran Dragic – who, by the way … he’s been on the John Wall plan away from the team. I don’t like that.”

As Slater noted, Dragic appeared in five games with the Toronto Raptors this season before being sent to the Spurs at the deadline. He played in the first four contests of the season, before another appearance Nov. 13. Dragic then left the organization in late November due to personal reasons. Dragic made his lone All-Star team in 2017-18 when he averaged 17.3 points, 4.8 assists and 4.1 rebounds per game for the Miami Heat.

Slater thinks it makes more sense for the Warriors to pursue a low-post option.

“I can hear the argument for a big,” Slater said. “I think it’s unwise for people to think a Robin Lopez and change the course of the season. But, sure, he can come in and bang around, get some rebounds, keep [Kevon] Looney a bit fresher, keep Draymond [Green] a bit fresher. I get that argument.”

The 33-year-old Lopez has been buried on the depth chart for the rebuilding Orlando Magic, behind youngsters Wendell Carter Jr. and Mo Bamba. Lopez, a physical 7-footer who attended Stanford, is averaging 7.7 points, 3.6 rebounds and 17.3 minutes in 27 games played this season with a 57.1 field goal percentage.

“Who you gonna cut? That’s one problem here,” Slater said. “[Nemanja] Bjelica obviously is kinda looking like a candidate lately. He has not played that well. But that cost the Warriors money, too. That’s something I’ve mentioned – if they had a firm plan to do a buyout, they would have traded a guy off the roster at the deadline to get their tax money off the books. You can no longer do that. It would cost Joe Lacob a pretty good chunk of change.

“I think it’s possible, I’ve been told it’s possible but they would have to basically convince [owner] Joe Lacob to sign a big check saying, ‘This will have a really big impact. This upgrade, this player over a Bjelica, a [Juan Toscano-Anderson], a Damion Lee – pick your player you’d have to cut – would be that much of an upgrade that’s worth it. I’m not sure there’s anyone out there that makes sense.”

Warriors president/GM Bob Myers also joined 95.7 The Game's "The Morning Roast" Tuesday and said the franchise is "gonna look" at the buyout market. He also revealed that James Wiseman was scheduled to play his first 5-on-5 contact scrimmage Tuesday since his knee injury last April, meaning the second-year center could be weeks away from rejoining Golden State. 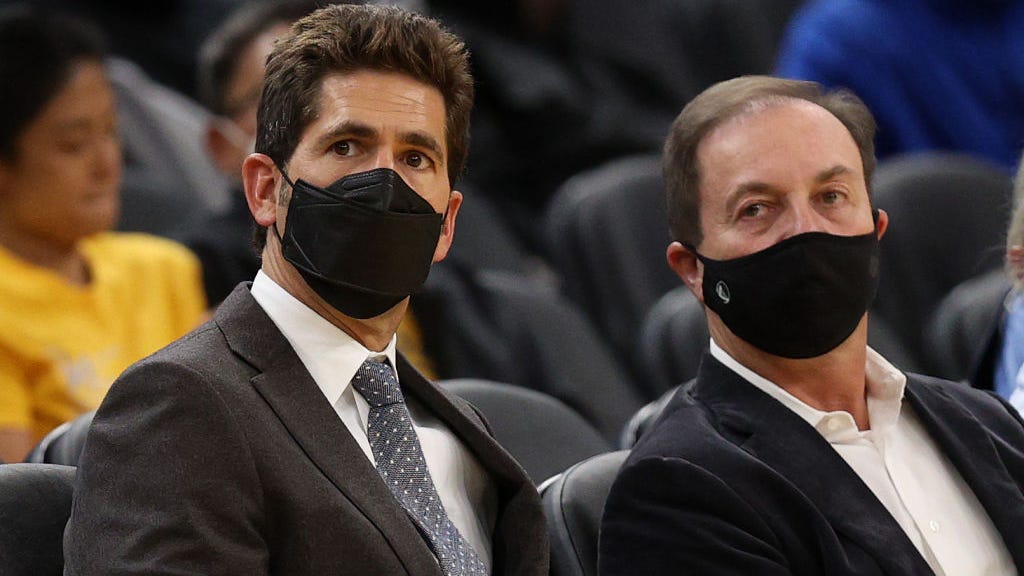