SAN FRANCISCO – The regular season hasn’t started yet, but the Warriors were putting out a fire Thursday afternoon.

As of early Thursday afternoon, Myers said the team still hasn’t decided on disciplinary measures for Green, but coach Steve Kerr added that Green won’t return to the team until at least Saturday. While Myers discussed the situation for more than 15 minutes, Kerr didn’t want to talk about the matter any further once he took the podium.

Myers is confident that the Warriors’ deep organizational continuity will get them through this rough patch.

“There’s a lot of real relationships in this room that can withstand adversity,” Myers said. “I think we’re gonna get past this. I don’t think this stays for the rest of the season. We’ll move on.”

Bob Myers on the altercation between Draymond Green and Jordan Poole ⤵️ pic.twitter.com/loBFx46CWA

Myers added that he wasn’t sure what words were exchanged in the lead-up to contact, as the two were reportedly chest-to-chest before Green reportedly punched Poole. Myers said Draymond addressed the team Thursday morning in person at the team facility, with Poole present in the room, but then left before the team’s practice.

“As far as any suspension, punishment, fine, we’re gonna handle that internally,” Myers said. “I understand you might have questions on that, but that’s gonna be an internal process.”

Myers and Kerr also took issue with reports insinuating that contract talks for both players led to the emotional buildup between the players. Chris B. Haynes of Yahoo! Sports reported that Poole’s changing behavior with a lucrative contract extension looming also played a role.

“Nothing can be further from the truth,” Kerr said. “He’s been fantastic."

Green is entering the final season of his contract before his 2023-24 player option, while Poole will enter the final year of his rookie deal unless he can reach an extension with the Warriors by Oct. 17. Myers said it won’t change the team’s approach to the negotiations, adding that talks with Poole’s reps are currently “ongoing.”

“I don’t think this was related to who’s getting paid, who isn’t,” Myers said. “I don’t sense that. Make your own conclusions.”

While Kerr didn’t wanna focus on the topic of discussion too much, he did provide a positive outlook on the overall feeling behind closed doors, saying Thursday’s practice still had good energy.

“There’s been a great vibe,” Kerr said. “We’ve had a hell of a camp. You have bumps in the road and you deal with it.”

"You’re better than this,” Myers said he told Draymond. “Don’t do this to yourself and don’t put yourself in this position.”

When Draymond does return to the team, he might have some fences to mend in the locker room.

"I think he’ll find a way to earn the respect of his teammates and Jordan back, but that’s the work he has to do,” Myers said. 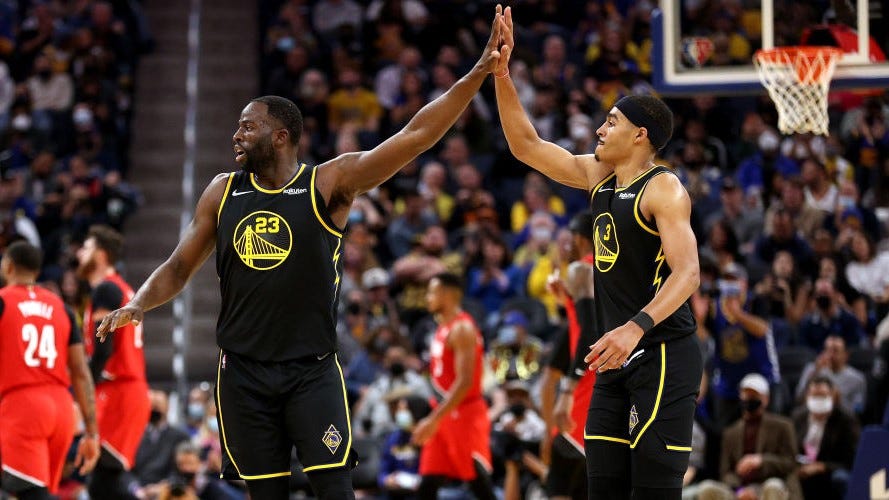