If you were an opponent of Steph Curry in the 2022 playoffs, you didn’t want to see him rest his head on his hands.

The Denver Nuggets, Memphis Grizzlies, Dallas Mavericks and Boston Celtics were all put to sleep by the eventual Finals MVP during this postseason. At various points throughout each playoff series, Curry busted out his go-to “Night, Night” celebration after hitting big buckets.

In all, Steph hit five Night Nights during the playoffs, while showing off the celly a few more times since the Warriors became NBA champs last week. Check out a Curry Night Night compilation:

After drawing Nikola Jokic on a switch, Steph drove in the lane, finished a tough layup over Joker’s outstretched hand and silenced the Denver crowd. The bucket gave the Warriors four-point lead with 40 seconds left, as the Warriors were on the verge of taking a commanding 3-0 series lead. Steph ended up with 27 points in the 118-113 victory, as the Warriors would go on to win the series in five games. Speaking of Game 5 …

The Nuggets were able to avoid elimination in Game 4, but couldn’t stop Curry and the Dubs in Game 5. After hitting a fancy left-handed finger roll with 29.9 seconds left, Steph said Night Night to the Nuggets, whose season ended shortly thereafter on the floor of Chase Center. Curry dropped 30 points in the Warriors’ first closeout game of the playoffs.

This Grizzlies series was intense, wasn’t it? The Western Conference Semifinals culminated in a legendary performance from Game 6 Klay, as Curry’s Splash Brother Klay Thompson scored 30 points and hit eight 3-pointers. Obviously, Klay demanded a lot of attention from the Grizzlies. Steph took advantage of a double team on Klay, who dished him the ball for a 3-pointer at the 1:38 mark. The bucket pushed the Warriors’ lead to 13 and helped bounce the Grizzlies from the playoffs.

Working on a Steph's "Night Night" story from playoffs, had to find a clip of this Grizzlies one from Game 6 🌙 pic.twitter.com/jQJRIHn8lS

5/20 - Game 2 vs. Mavericks
Steph might have had an early feeling that the Warriors were bound to beat the Mavericks. In the closing moments of Game 2, Curry took a pass from Thompson, shook Mavs superstar Luka Doncic and splashed a 3-pointer in from 27 feet. The Warriors went up by 10 and took a 2-0 lead that night, before winning the series in five games.

After this game, Steph explained the origins of his Night Night celebrations.

“I have no idea,” Curry said. “You can tell I don't choreograph none of that stuff. Just having fun. You talk about having kids, you know how bedtime routines are important. It's the final signal for a job well done that day. So pretty special.”

“You talk about having kids, you know how bedtime routines are important. It’s the final signal for a job well done that day.”

The last Night Night of the season. For his crowning act of a remarkable NBA Finals MVP run, Curry scored 34 points and sank six 3-pointers in Game 6 to clinch another title. With about 3:15 left, he drilled a corner three to tuck in the bamboozled Boston crowd. That was it. The Warriors led by 15 and would be celebrating at midcourt just a few minutes later.

this photo belongs in the @Hoophall pic.twitter.com/M7pMcHehL4

Steph and the Dubs might have been done playing basketball, but he was just getting started with the Night Night celebrations. During Monday’s epic parade on Market Street, with an estimated 800,000 attendees, fans also made signs for Steph, who was Night Night’ing all over the place.

IT'S A "NIGHT NIGHT" MIC DROP

The way he tore it up in the playoffs and at the Warriors’ parade afterparty Monday night, he deserved that last Night Night on the concrete floor. 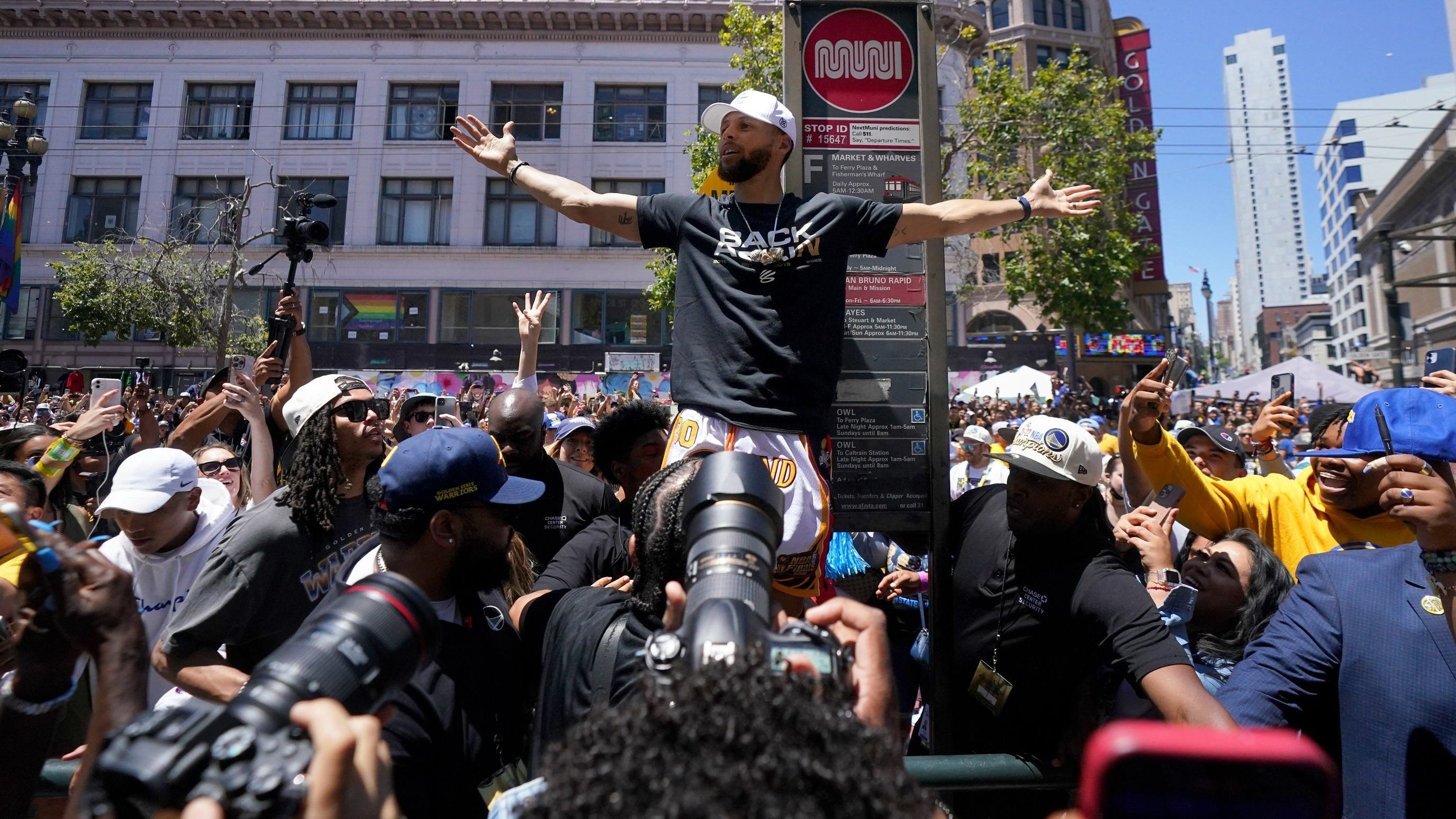