The Curry Brand is releasing Steph’s lucky purple playoff shoes on Friday. It’s a slow sports day. Let’s go back in time to the Warriors’ championship run, shall we?

The Lucky Lilac Curry 4 Flo Tro became famous during the final few weeks of the Warriors’ postseason. In all, Golden State went 5-0 in the games when Steph wore the shoes, including a 2-0 mark against the Memphis Grizzlies and 3-0 record against the Boston Celtics in the finals.

Here’s a game-by-game breakdown of Steph in the Lucky Lilacs:

Perhaps we should have known that these shoes were special. The Grizzlies played the Warriors physical and tough in the Western Conference semifinals, lowlighted by Dillon Brooks cheapshot on Gary Payton II in Game 2. With the series tied at 1-1, back in The Bay for the first time, Curry laced up the Lucky Lilacs.

This might have been the game where Steph truly unlocked the magic. He started out the game in some loud shoes, as the bright orange colorway was a nod to the late, great and stylish sideline reporter Craig Sager.

After the third quarter, as he rested the initial three minutes of the final period, Curry changed into his purple shoes on the bench. To that point he had 14 points on 18 field goal attempts. In his nine fourth-quarter minutes, he scored 18 points on 4-of-7 from the field, 2-of-4 from 3-point land and hit 8-of-9 clutch free throws.

The Warriors went on to win an ugly 101-98 game to take a commanding 3-1 series lead against Memphis.

A reporter asked Steph about the shoe change after the game, but he didn’t offer much of a response, perhaps as not to cast any bad light on the Sager shoes.

“Shock the system a little bit,” he said.

As the momentum in the tense NBA Finals built, Curry dusted off the Lucky Lilacs to run all over the Lucky mascot at halfcourt in TD Garden. Even Draymond Green was shocked at the entire arena yelling “F–k you, Dray-mond!” in Game 3, as the Warriors looked discombobulated and fell into a 2-1 series hole. Falling behind 3-1 with another loss in Boston would have been devastating.

Steph, of course, put on the purple playoff kicks and put on an all-time NBA Finals performance.

You could tell early on he was motivated, as he went ballistic following a first-quarter 3-pointer and yelling at the entire Boston crowd, veins bulging from his neck. In a podcast interview earlier this summer, Draymond said he recognized what Steph was doing – trying to deflect the crowd’s energy off Green and onto him.

At this point, the purple shoes were definitely a thing. Steph is hyper aware of everything, so I assumed he knew that he was 3-0 in the kicks at that point. About that.

During the media day before Game 5, I asked Steph about his undefeated record in the kicks. Turns out he didn’t know about the 3-0 mark.

“I did not even know that, so I appreciate you -- I don't know if that messes with the juju on there if I'm aware of the record now,” Curry said. “I've got a lot of different colors, so we'll see. We'll see what happens. Got me thinking now, too.”

.@AlexEspinozaIV asked Steph about being 3-0 in his purple shoes:

Steph: “I did not even know that, so I appreciate you… I don’t know if that messes with the juju on there if I’m aware of the record.” 😂 pic.twitter.com/SjpXdzUcJX

After struggling through the first half in half-white, half-orange shoes, he switched to the Lucky Lilacs at intermission. Curry scored a Finals-low 16 points but dished out a series-high eight assists and ended up going 0-for-9 from 3-point land. It marked the first time in 234 games he didn’t splash a trifecta, but the Warriors won by 10 at Chase Center.

The victory put Curry and Golden State one win away from a fourth championship, with a closeout opportunity in Boston. They also moved to 4-0 in games where Steph wore the Lucky Lilacs.

Steph didn’t mess around with the shoes in Game 6. He often wears different kicks during warmups than he does for the game.

For Game 6, Steph wore them to warmups and wore them in the game. He delivered one last masterclass, scoring 34 points and hitting six 3-pointers, with seven rebounds and seven assists.

With that, the legend of the Lucky Lilacs was sealed. Golden State went 5-0 while Steph wore the shoes, which will be showcased on highlights for decades to come. 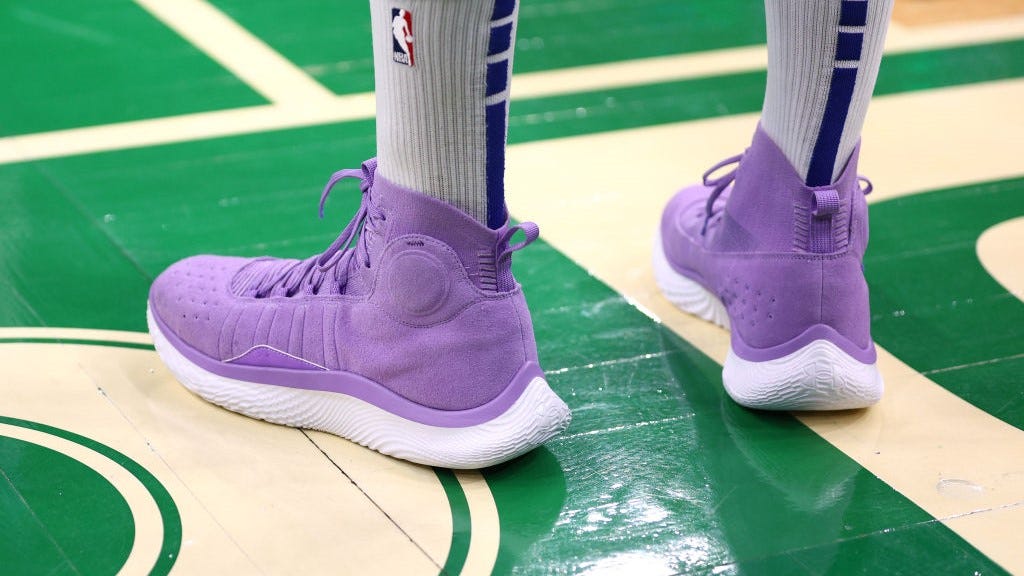