At times, both Jonathan Kuminga and Jordan Clarkson both looked unstoppable flying through the paint during Wednesday’s matchup between the Warriors and the Jazz. But Clarkson’s night came to an early end in the fourth quarter, as he was ejected after a rough foul on Kuminga during a tense finish to the game.

After Kuminga grabbed the ball for a key rebound with less than 30 seconds remaining, Clarkson wound up and aggressively tried to rip the ball from JK’s grasp over his shoulders. Once the whistle blew, Kuminga looked at him and Clarkson got fired up, pushing aside referee JB DeRosa before squaring up like he wanted to bare knuckle box.

After replay review, Clarkson was eventually charged with a Flagrant 2 foul for unnecessary contact and ejected from the game, so he couldn’t celebrate on the floor as the Jazz snatched a 124-123 heartbreaker from the Dubs.

Kuminga told reporters after the game he wasn't trying to instigate anything.

"I didn't have no intention to do anything," Kuminga said. "It was just funny to the point where I saw him square up right away and I'm, like, you were the one who fouled me. You don't got to do all that. It was just funny just seeing that. I didn't say nothing. I didn't do nothing."

After Clarkson was ejected, the Jazz were able to hit a late 3-pointer and steal the ball from Jordan Poole to get a transition dunk. All in the final eight seconds of the game.

"We were supposed to win that game," Kuminga said.

Kuminga finished with 24 points on an efficient night, going 10-of-13 from the floor while bullying the Jazz in the paint. Clarkson had some impressive drives of his own and finished with 22 points and nine assists in 37 minutes of play, so he did his part for the Jazz. 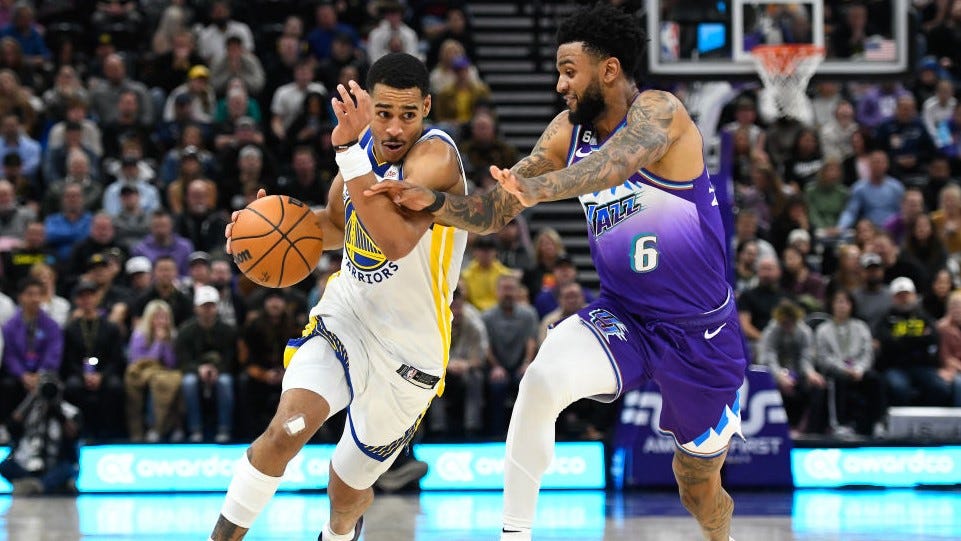