As recently as a couple weeks ago, Friday’s third quarter probably would have went differently for Klay Thompson.

Through the first half of Friday’s game against the Utah Jazz, Klay was just 1-of-5 from the field, and 0-for-3 from 3-point land. While he may have tried to shoot himself out of the slump with some unwarranted attempts during his early-season freeze, he stayed patient Friday.

The buckets presented themselves eventually and he knocked ‘em down. First an in-rhythm 3 after a whipping off an Andrew Wiggins screen, then a transition 3-on-2 splash that caused the Jazz to call a timeout. Then Klay did it again, hitting back-to-back threes in the final minute of the third quarter. The quick splash salvo highlighted Thompson’s 20-point evening, as he was one of six double-digit scorers in a 129-118 victory.

KLAY IS ON FIRE 🔥

“I loved Klay’s game tonight,” Warriors coach Steve Kerr said. “I think he was, like, 1-for-5 in the first half but never chased anything bad. Just stayed patient and hit those big shots after we had lost the lead.”

As the Warriors stumbled to a 3-7 start to the season, Klay’s frigid start became a hot topic of discussion. The Dubs are 7-3 since. On Friday night, Kerr pointed to Klay's third-quarter flurry as the game-swaying sequence.

“It’s all relative. Feels great,” Kerr said with a big smile after the game. “We’re trending upward and everything’s starting to feel more settled. Guys are finding roles and doing a good job. Now we gotta take it on the road.”

Being .500 never felt so good 😅 pic.twitter.com/DXiXmzMzGv

Ever since Draymond Green led a team-wide talk last week, the Warriors are now 4-1, including a 4-0 mark in games where Klay has played. In that span, Klay has also reverted to being one of the game’s top shooters, going 23-of-43 (53.4 percent) from beyond the arc. His 3-point percentage is now a much-more Klay-like 38.9 percent, a swift upshot from the 33 percent clip he had through his first 12 games played. During this four-game heater, Klay is averaging 24.8 points per game and shooting 52.3 percent from the floor overall.

Earlier in the day, Thompson told reporters that a recent hiatus from social media helped clear his mind.

Thompson took some warranted heat checks Friday night after starting off his season with many unwarranted ones. His teammates are noticing that his passing is unclogging the offense.

“They’re not leaving his body,” Curry said of opposing defenses. “It’s kinda hard to get clean looks when you know they’re gonna try to take his 3 away. But over the course of the game, if he keeps making the right play, keeps staying patient, the game’s gonna back to him. … That’s huge to stay locked in and not press and force and think, ‘Not getting that many attempts in the first half, and it’s gonna stay that way the rest of the game.’ He stayed ready and it helps us so much when he stays locked in like that.”

Last year, the 30-assist mark proved to be a great indicator of winning, as the Warriors went 26-1 when they reached the magic number. They racked up 33 assists Friday for their league-leading 12th 30-assist night of the season, but are just 7-5 in such games this season. Kerr chalked it up to the team’s poor defense to begin the season, which is slowly getting reined back in.

“Our defense last year was No. 2 in the league,” Kerr said. “This year, we’re getting better, but we’re still near the bottom of the league in terms of defensive efficiency. Ball movement’s great, but it’s a two-way game. … I think the reason we’re finding a better rhythm as a team is that we’re playing better defense.”

Curry is making it look easy now on a nightly basis, but he dropped 33 points in another masterclass that also featured six made 3-pointers, five rebounds and four assists. The game looks like it’s flowing to him in Year 14. It also helps that he’s added 15 pounds of muscle since his unanimous MVP season of 2015-16.

“Lot of good Ayesha’s cooking right there,” Curry said, smiling and slapping the podium for effect – in a reference to jokes from Boston fans during the 2022 NBA Finals. “With the added strength, I’ve kept my endurance where it goes hand-in-hand. Fourteen years in, playing 34, 35 minutes or whatever, hard minutes, I feel great.”

Steph gave a S/O to Ayesha's cooking for adding 15 pounds over the past few years 💪 pic.twitter.com/uHbcGaQHI0

Kerr's rotation seems to be coming into focus after some early-season experimenting, with Moses Moody and Ty Jerome as the odd men out Friday night. The Splash Brothers were humming, Wiggins still dropped 20, Jordan Poole added 19 aggressive points off the bench, Draymond scored 13 and Kevon Looney scored 10. Though the Jazz briefly overtook the Warriors with a second-quarter surge, Golden State’s defense is starting to settle.

“I think we have a bunch of things to work on, but we are stabilized,” Green said. “We’re starting to play our brand of basketball on both ends of the floor. Starting to get guys into a groove that we need in order for us to win at a high level. I think we’re starting to figure it out.” 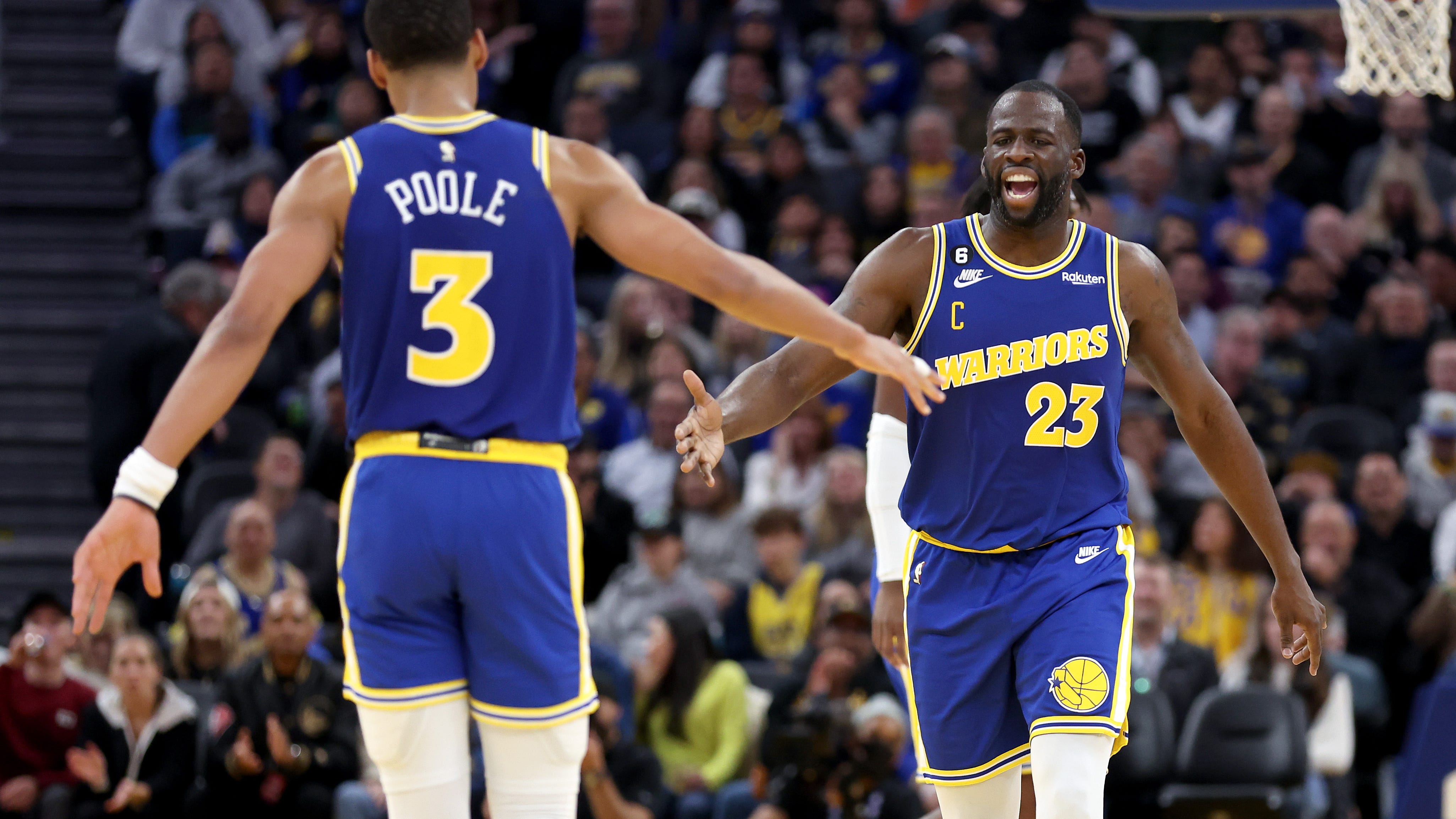