49ers coach Kyle Shanahan was running late to Wednesday’s scheduled press conference with reporters in Santa Clara, but he had a good reason. Warriors coach Steve Kerr dropped by for an impromptu visit and got to check out the team while they did a light walk through.

"I got to meet him this summer,” Shanahan said. “We have some close, mutual friends. He was in the area and asked if he could stop by. Wish he came at a more exciting time, like a practice or a team meeting. He was only here during walkthrough. It was cool that he got to get out there and got to catch up with them for a little bit."

As Tim Kawakami of The Athletic detailed in a story earlier this year, Kerr made eye contact with Shanahan while he was in a Warriors huddle during Game 2 of the Finals at Chase Center. Shanahan was sitting a couple rows behind the Warriors bench and eventually golfed with Kerr later that summer.

“He was in the area and asked if he could stop by… It was cool that he got to get out there and we got to catch up."

Kyle Shanahan provided all the details as to how Steve Kerr wound up a guest at 49ers walk-thru this morning. pic.twitter.com/ZN2tK1eAMh

Shanahan is in the midst of his Week 3 preparations for longtime foe Rusell Wilson and the Denver Broncos. Last week, Kerr went on a retreat with his coaching staff to lay out the plan for the 2022 season.

Kerr has had a busy offseason that included his daughter’s wedding and a trip to Africa for the NBA’s Basketball Without Borders program, as he detailed with 95.7 The Game’s “Damon & Ratto” earlier this month.

While Shanahan seems to have a safe place with the 49ers franchise in his sixth season at the helm, he’s 44-45 including the postseason since taking over in 2017. He’s still seeking his first Super Bowl, though. Golden State, meanwhile, has won four titles in eight years since 2015 and Kerr is eager for the challenge to repeat.

“My experience is that trying to repeat is actually really fun,” Kerr told 95.7 The Game. “If you’re lucky enough to win two in a row, that third one is a grind.” 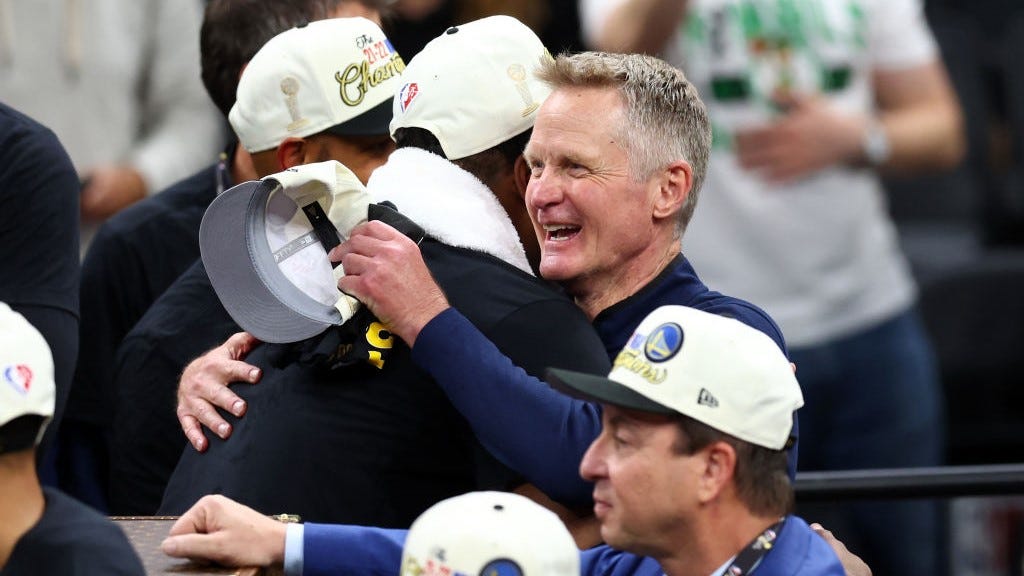