A big ol’ bag of money is coming to Jordan Poole within the next 12 months. He knows it. Everyone knows it.

According to a report by Yahoo! Sports’ Chris B. Haynes, Poole’s changing “behavior” might have played a role in a “buildup” to his incident with Draymond Green during Wednesday morning’s practice.

Earlier in the evening, The Athletic reported that Green “forcefully struck” Poole after the two went chest-to-chest, while ESPN’s Adrian Wojnarowski wrote that Draymond “threw a punch” at Poole.

If Haynes’ intel about Poole’s attitude is correct, it could give us some context about the confrontation. The fact that Haynes also reported Green was apologetic is a good sign, as it’s better than him storming off in a fury.

Still, it appears that he went overboard, as Haynes also tweeted that “no players for the Golden State Warriors felt the incident was warranted.”

Yahoo Sources: Draymond Green and Jordan Poole have a history, but no players for the Golden State Warriors felt the incident was warranted. Some form of disciplinary action is expected.

Poole and his reps are negotiating with the Warriors front office about an extension to his rookie deal. If the two sides can’t come to an agreement by Oct. 17, Poole will become a restricted free agent next summer, meaning the Warriors would have a chance to match any offer he receives.

As The Athletic’s Anthony Slater noted on “Steiny & Guru” Wednesday, before co-reporting the big news, Poole’s market appears to have been set with Tyler Herro’s recent extension. The reigning Sixth Man of the Year received a four-year, $130 million deal, but $10 million of that comes in the form of hard-to-obtain incentives.

So, let’s call it a four year, $120 million deal for Poole if they can consummate something in the next 12 days. If not? Poole could elevate his game closer to the five-year, $188 million max he’s eligible for, per Spotrac. Perhaps a team who wants to make Poole its No. 1 or No. 2 option will outspend the mighty Joe Lacob.

This is Poole’s reality right now. He’s 23, coming off a championship and staring at a massive nine-figure payday in the coming year, so long as he can stay healthy. A lot of people’s heads could get big in that situation.

Poole is uber confident and always has been, even when he was struggling as a rookie and shuttled between the G League and NBA his second season. Last year, Poole played a key role in the Warriors’ 23-5 start as the starting shooting guard, before providing instant electricity off the bench. In the playoffs, he shot 50.8 percent from the field, 39.1 percent from 3-point land and made 2.3 3-pointers per game. He made some clutch buzzer-beaters. He’s good, going on great. And he knows it.

These two guys are super competitive and have big egos. You need a big ego to be a star in the NBA.

In Draymond’s mind, you can’t tell him nothing in an argument. N-O-T-H-I-N-G. He’s a four-time champ and helped innovate positionless basketball. But even he's not above reproach.

Poole looks like he’s on the verge of stardom, but he’s not quite there yet.

Draymond said on his latest podcast he enjoyed seeing Steph Curry and Klay Thompson “humble” Poole and Moses Moody in a 3-point shooting showcase. It appears Draymond tried to serve up too big a piece of humble pie this time. 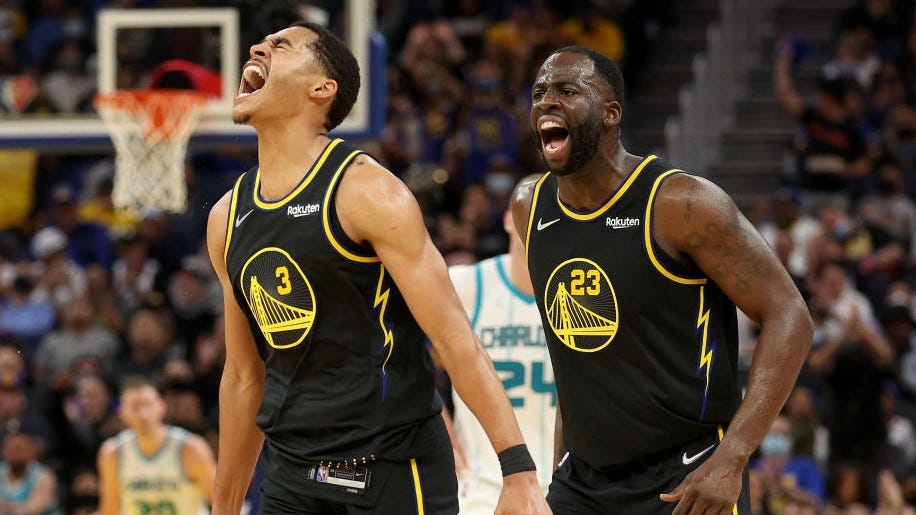