Bill Russell was one of the greatest champions in the history of sports, but that’s not all we lost with his passing Sunday. The Celtics legend, much like Jackie Robinson in baseball (ironically enough, Russell was a pallbearer at Robinson's funeral), was a pioneer, a widely admired black athlete at a time when America was still largely segregated, with Civil Rights leaders—Martin Luther King Jr. and Malcolm X among the most prominent—paving the way for future generations. Simply put, basketball’s story couldn’t be told without Russell, a ruthless defender and face of the NBA’s first real dynasty (the Celtics won an unprecedented 11 titles over his 13-year reign). While Michael Jordan may have surpassed him in popularity, Russell’s contributions to the sport are immeasurable, laying the foundation for the global juggernaut the NBA would eventually become.

The emotional tributes and outpouring of support we’ve seen for Russell over the past 24 hours are a testament to his lasting greatness, transcending sports with his resiliency in the face of racial prejudice, forging a career that, a half-century after its conclusion, still resonates as one of the most dominant of all-time. Only two players in America’s four major sports—Robinson and NHL great Wayne Gretzky of Edmonton Oilers fame—have had their numbers retired league-wide. But Chris Mannix, who covers the Celtics for NBC Sports Boston, believes Russell deserves to be the third in recognition of his enormous impact as an ambassador for the sport and one of basketball’s earliest superstars.

“He battled Chamberlain in front of local fans who defaced his home with racial slurs. He competed against Jerry West the same season he led a strike of an exhibition game because a restaurant in Kentucky would not serve the team’s black players,” wrote Mannix in a column for Sport Illustrated. “Russell didn’t break the NBA’s color barrier—Earl Lloyd, Chuck Cooper and Nathaniel ‘Sweetwater’ Clifton did that, in 1950. But his accomplishments were every bit as meaningful.”

The NBA named its Finals MVP trophy after Russell in 2005, six years before Barack Obama awarded him the Presidential Medal of Freedom, the most prestigious honor a civilian in the United States can receive. Russell’s iconic No. 6 is already retired by the Celtics, who he played for and also coached when Red Auerbach transitioned to a front office role in 1966, but will the rest of the league follow suit? That remains to be seen, though Mannix makes a compelling case, arguing Russell’s legacy goes far beyond the game of basketball.

“He was the NBA’s Robinson,” opined Mannix, noting Russell’s influence as a Civil Rights activist, marching with MLK while voicing his unwavering support for Muhammad Ali in his crusade against America’s participation in the Vietnam War. “He took on systemic racism and won.” 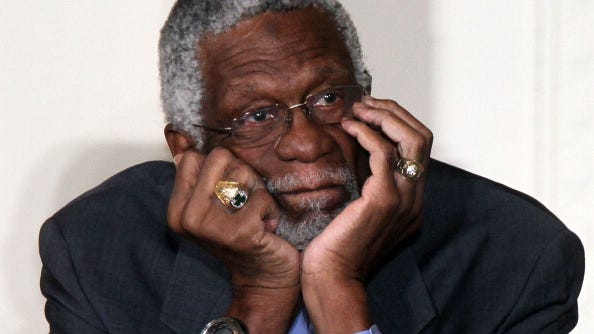