Soon you can own a pair of Steph Curry’s purple playoff shoes.

The Lucky Lilac Curry 4 Flo Tro, which Curry made famous during the Warriors' latest championship run, will be on sale Friday (UPDATE: Click here to see them online). The Curry Brand posted the news Thursday morning on Instagram, with Steph modeling the kicks in the photo while holding his Finals MVP trophy.

Curry went 5-0 in the purple shoes during the playoffs, including the final three games of the series, all victories. Curry’s legendary 43-point performance in Game 4? He was wearing Lucky Lilacs

Reporters first asked Curry about his purple shoes during the Memphis Grizzlies series, as he switched into them in the fourth quarter of Game 4 before going off in a victory. I asked Curry about them before Game 5 of the Finals, as he had moved to 3-0 in the shoes at that point.

“I did not even know that, so I appreciate you -- I don't know if that messes with the juju on there if I'm aware of the record now,” Curry said at the time. “I've got a lot of different colors, so we'll see. We'll see what happens. Got me thinking now, too.”

.@AlexEspinozaIV asked Steph about being 3-0 in his purple shoes:

Steph: “I did not even know that, so I appreciate you… I don’t know if that messes with the juju on there if I’m aware of the record.” 😂 pic.twitter.com/SjpXdzUcJX

Curry had the shoes on for the clincher in Boston in Game 6, when he dropped 34 points with seven rebounds, seven assists and six 3-pointers made, to put a bow on his first-ever Finals MVP award and fourth championship.

The originals should end up at the Hall of Fame one day, but you can be hooping in your own pair by this weekend. 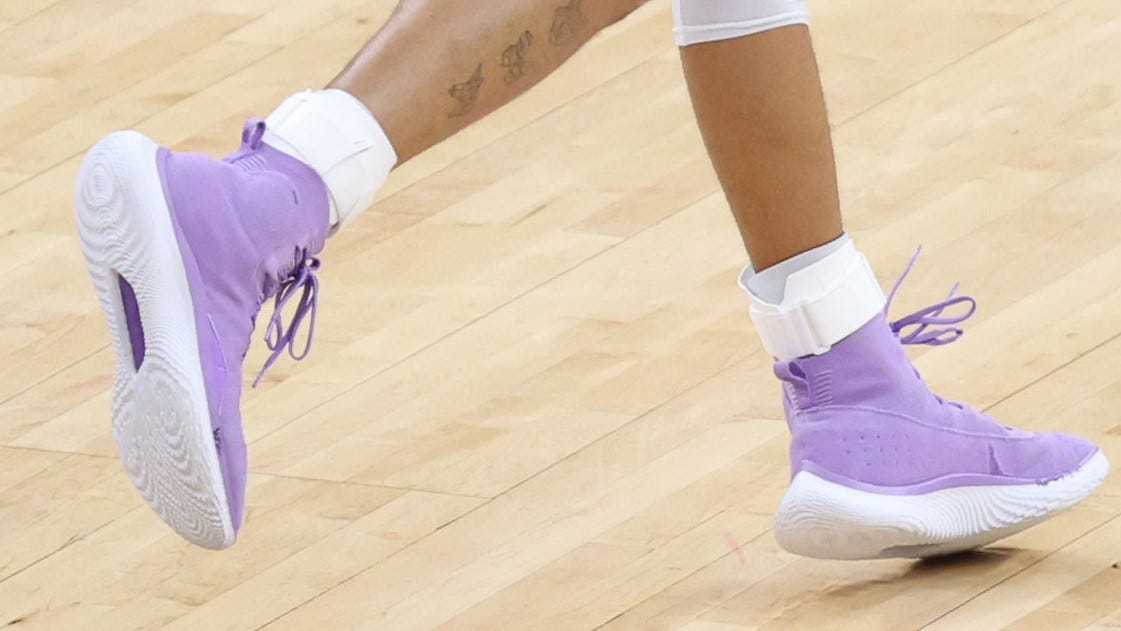