Steve Kerr will probably never live down his “chase wins” comment from earlier this year. Back in February, as the Warriors trudged through a season that didn’t end up in the playoffs, Kerr told reporters, “For me, for our organization, we're not throwing Steph out there for 40 minutes to chase wins.”

While the Warriors were 11-10 through 21 games last season, they’re 18-3 heading into Friday night’s big showdown against the Phoenix Suns. During his weekly appearance on 95.7 The Game’s “Damon & Ratto” Thursday, Kerr discussed the difference between this season and last season. Listen to the full interview below:

“We were not great last year,” Kerr said. “We were in development mode, we knew we were without Klay [Thompson]. We were in a position where I was not going to burn Steph Curry out in a year like that. I’ve always been very frank and honest, you guys know this, but I chose my words poorly because it allowed everybody to latch on to them. This is a totally different year. We have a championship contender. We’re now in a position where we are one of the best teams in the league. I want to win every year, but when you’re in a position to win big, there’s a fire that burns beneath you every day because you feel it, you’re close. I think that’s the sense this year.”

Curry is playing 34.3 minutes per game this season compared to 34.2 in 2020-21, so the overall usage is pretty much the same. The Warriors are generally holding to Curry’s new substitution pattern that was established in early November, as he now starts the fourth quarter and generally plays until the game is decided. Curry almost played the entire fourth quarter against the Suns Tuesday, sitting for less than a minute, and he also played the final 14 minutes against the Portland Trail Blazers last Friday.

Curry was shut down for 12 points Tuesday night while playing 35:58. He figures to be well-rested heading into Friday night’s contest while the Suns will be playing the second leg of a back-to-back following their franchise-record 18th straight win Thursday night, a 114-103 victory over the Detroit Pistons.

“I want to win every year, but when you’re in a position to win big, there’s a fire that burns beneath you every day because you feel it. You’re close. I think that’s the sense this year.”

“Everybody that we play has a plan for Steph,” Kerr said. “There’s going to be a big, physical defender on him, there’s going to be help everywhere. People are going to blitz him, trap him, switch on him, he’s seen it all. I think the key the other night was that Phoenix really didn’t make mistakes.”

Mikal Bridges has earned praise for his stellar on-ball defense against Curry Tuesday, but Kerr also said the Suns’ length and scheme was tough to match up against as a team.

“They were really on a string,” Kerr said. “All five guys together on their switches.” 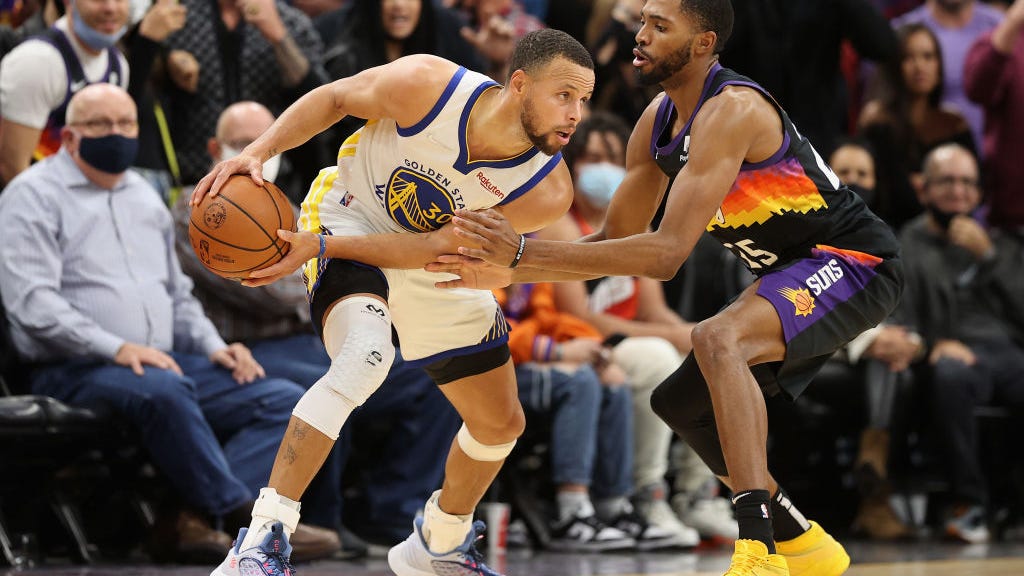