Kevin Garnett delivered one of the most memorable quotes in sports history when he helped the Celtics to their 17th NBA Finals victory in 2008: "Anything is possible!"

Eight years earlier, Russell Crowe delivered another one of the most memorable quotes of all time, albeit outside the world of sports, during his portrayal of Maximus Decimus Meridius: "Are you not entertained?"

And I have to think that at multiple points in the long roads of both KG and Maximus, they could have swapped quotes and still had the same profound effect in their deliveries. Perhaps Maximus could have dropped an "anything is possible" after he was — spoiler — able to win the seemingly impossible fight against the previously undefeated Tigris of Gaul and a group of three tigers. And perhaps Garnett could have turned to the crowd and asked them whether or not they were entertained after he had any one of his ridiculous games, such as his 44-point double-double in a victory over the first-place Suns in 2007.

It makes sense, then, that Garnett drew inspiration from the film in question — 2000's "Gladiator" starring Crowe — and used it to spread his passion to other players. Zach LaVine, now on the Bulls, was a rookie for the 2014-15 Timberwolves when Garnett was brought back to the team with which his career started. He shared an incredible "Gladiator" Garnett moment with Timberwolves writer Jon Krawczynski (warning: NSFW language):

Rookie year after he got traded to us (in 2015). He gets to the gym early. As a rookie you get to the gym real early like at 3 or 3:30 for the game. In the locker room there used to be a couch and TV next to the kitchen, so we walk in and KG’s there. It looks like he’s been there. He’s watching the movie “Gladiator.” It’s the final scene where Russell Crowe is fighting for his life. He sees me and Andrew (Wiggins) and he’s like, ‘Come here, come here.’

So we walk over there. He’s real into the movie. “You see this shit right here, this is what this shit’s about. You die for what you believe in. You die for your boys. This is that mentality we need to have going into the game. It’s about war. It’s about going down with your boys. I love this shit. This shit gives me goosebumps.”

I look, and he actually has goosebumps. I’m a big KG guy and I’m like “Yeah, I’m with you man. This is how we gotta play.” He’s like “right, Zach. You feel me Wiggs?”

Andrew Wiggins says “I don’t know even know what ‘Gladiator’ is, I’ve never heard of this movie.” The look on his face was like perplexed. Not anger, but just like get out of my face. So he just looks at us and says, “Y’all go get ready for the game, man.”

What's more surprising... that Garnett actually had goosebumps when he used the common idiomatic expression about getting goosebumps, or that Wiggins had never heard of "Gladiator?" What do they watch up there in Canada, anyway?

Garnett's gladiator mentality served him well throughout his career, one in which he earned 15 All-Star selections, was a nine-time All-NBA and 12-time All-Defensive player and won the 2003-04 MVP Award en route to a Hall of Fame career. Garnett, along with Tim Duncan and the late Kobe Bryant, will all be inducted into the Naismith Memorial Basketball Hall of Fame in the Class of 2020, and their enshrinement ceremony is on Saturday. 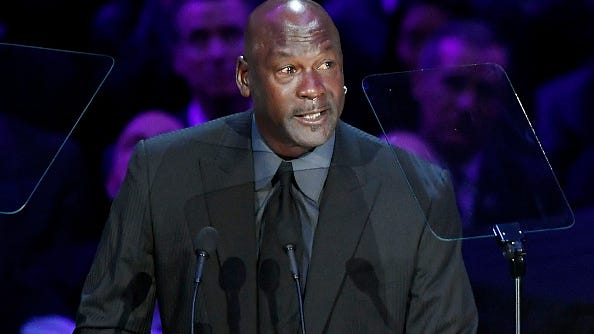 news
COVID-19 halted many dentist trips, but adverse effects can be reversed
news
These New York landmarks will be lit up Saturday night for Juneteenth
<img onerror="this.onerror=null; this.src='https://images.radio.com/aiu-media/og_775x515_0.jpg'; this.srcset=this.srcset.repl