What a weird night at the American Airlines Center in Dallas.

In a game marked with an indoor rain delay and other oddities like a free-throw attempt that settled on the back of the rim, the Warriors’ best five Tuesday night didn’t include Steph Curry, Draymond Green, Klay Thompson, Andrew Wiggins or Kevon Looney.

No, on a bizarro night in Game 4 of the Western Conference Finals, the quintet of Jordan Poole, Jonathan Kuminga, Moses Moody, Damion Lee and Nemanja Bjelica was the Warriors’ faint lifeline. That’s right – a 22-year-old, two 19-year-old rookies and two of the most maligned players on the team’s bench.

Sure, the Mavericks stayed alive in the series with a 119-109 victory, but the Warriors’ bench mob made a game of it down the stretch. Dallas dominated most of the night and led by 29 entering the fourth quarter. It looked like we were headed towards 12 minutes of garbage time, but Golden State’s second unit shrunk the lead down to eight, when Kuminga nailed a corner 3-pointer with 3:23 remaining.

Kuminga cuts the deficit to 8 👀 pic.twitter.com/dIDmSdxlkI

“It’s huge obviously for the confidence,” Lee said of the late push. “Not even just for the guys on the bench but the coaches. Gives them confidence that anybody on this roster, they can throw into the mix of the game. Doesn’t matter who it is.”

After getting cooked all game, the Warriors defense finally slowed down Dallas with a zone look in the fourth quarter. Golden State went on a torrid 15-2 run to begin the period that forced Mavs coach Jason Kidd to re-insert Luka Doncic and his starters back into the game.

On the flipside, Warriors coach Steve Kerr was tasked with an interesting decision: Stay with the upstart backups, or go to his title-tested core on the bench? Kerr rode the second unit until Kuminga’s 3-pointer, when he substituted Curry in for Lee. The Mavericks promptly scored five points and the magic evaporated.

“It’s kinda crazy that we had an opportunity to even think we had a little bit of life,” Curry said. “Credit those five guys out there that made that possible.”

Sweeps are hard to come by in the NBA playoffs. Especially in the Western Conference Finals.

The ‘L’ hurts, but the Warriors are thinking big picture about the additional minutes that the Mavs starters had to play – as Luka played 38 minutes, including the final 7:23 when he could have been resting. He’s averaging about 38 minutes per game and has dealt with illness and shoulder soreness this series.

“Even though we didn’t come out with the win, those guys had to play for the rest of the game,” Moody said. “They didn’t get to take a break. They didn’t take any time off and we gotta go back and play them again. They didn't have a break in the second half, they had to play all 40 minutes.”

Kuminga asserted himself with 17 points and eight rebounds in 22 minutes while getting his first real run of the series. Moody added 10 points with a couple of 3-pointers, Bjelica showed some nice playmaking en route to a team-high +18 in 15 minutes and Lee had six points, six rebounds and a +15 in 15 minutes.

“It was a different feeling,” Curry said. “There was a nervous energy in the building and our guys were just out there hooping. That was fun to watch. It was fun to watch them compete, find a little rhythm, a little chemistry. And just give us some life.”

The bench players said they keep sharp by scrimmaging – whether it be 3-on-3 or 5-on-5 – during their “off” days. Moody gave a shoutout to coaches Leandro Barbosa and Hilton Armstrong, and Klay Thompson’s brother, Mychel, for bringing high-level competition.

“Guys are competing with us behind the scenes and getting us better for these opportunities like this,” Moody said.

The Warriors’ starters should be well-rested for Game 5. Curry led the starting five with 33 minutes, while Wiggins played 31, Thompson played 28, Green played 26 and Looney played 20.

If there’s another positive takeaway from the loss, it’s that the Mavericks absolutely needed to shoot the lights out to win. Dallas shot a blistering 20-of-43 (46.5%) from 3-point land and still had to fight until the final minutes to get the victory. Luka finished with 30 points, 14 points and nine rebounds, just shy of a triple-double. Reggie Bullock (18 points, 6-of-10 from 3), Dorian Finney-Smith (23 points, 4-of-7 from 3) and Maxi Kleber (13 points, 2-of-3 from 3) all contributed after going ice cold in Game 3.

"Just seeing if we could pull off a miracle," Kerr said. "Dallas was great tonight. They deserved to win."

The Warriors also acknowledged playing with a heavy heart following Tuesday's mass shooting in Uvalde, Texas – which is located about a six-hour drive away from Dallas. 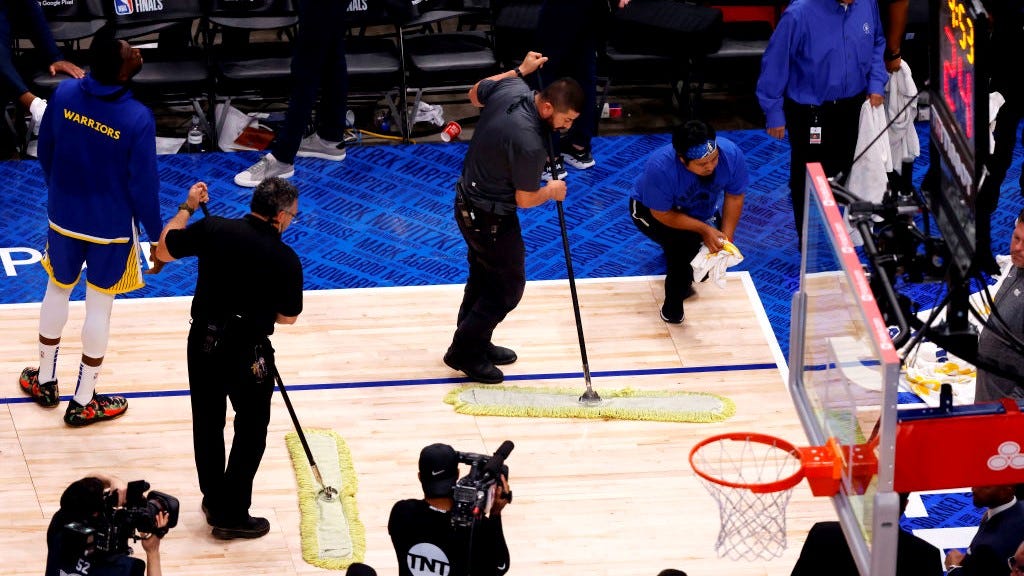 Game 4 of Western Conference Finals delayed due to roof leak