There’s a certain sound to baseball games at the Oakland Coliseum. A certain rhythm. Most of the cacophony emanates from Section 149 in the right field bleachers, a symphony of drums, cowbells, horns and creative chants. But there’s also a certain look to A’s games these days, as players are surrounded by a sea of empty green seats.

The team is reeling following its latest six-game homestand, after getting swept by the Cleveland Guardians and Tampa Bay Rays in consecutive series. Monday night's crowd of 2,488 was Oakland's smallest since 1980.

As expected, attendance has been a major storyline this year following another offseason reset, when beloved stars Matt Olson, Matt Chapman, Sean Manaea and Chris Bassitt were traded for hauls of prospects. Since 2019, the franchise has doubled ticket prices in sections across the Coliseum without making any major renovations. A’s president Dave Kaval has also rubbed fans the wrong way with his public flirtations with Las Vegas and head-scratching tweet tirades that included a back-and-forth with a digital seagull. A local beer company even got in hot water after printing “Viva Las Vegas!” on the bottom of A’s-themed cans and had to issue a mea culpa.

It’s been a rough start to 2022 for A’s fans, yet the drumbeat goes on in the right field bleachers. The bleacher fans call themselves the Oakland 68's and have organized a non-profit independent A's supporters group that puts on events, tailgates and watch parties.

The longstanding Coliseum drumming tradition started around 2000 in the left field bleachers and became synonymous with the team during the era with Jason Giambi, Eric Chavez, Miguel Tejada and the Big 3 of Tim Hudson, Mark Mulder and Barry Zito. In 2001, George Steinbrenner implored MLB to silence the drummers while the Yankees faced the A’s in the ALDS. In 2015, the Houston Astros sent out this tweet that’s still a favorite among A’s fans.

The A’s fans in the bleachers have drums at the games. It is not a broadcast issue and there is nothing we can do about it.

Stephen Piscotty grew up in the East Bay in Pleasanton. Since 2018, he’s appeared in 365 games for the A’s in right field, so he’s probably heard the drums more than any player the last five seasons.

“It’s ingrained in this organization and the Coliseum,” Piscotty said. “They bring the energy and there’s just something – they put their stamp on the game.”

It’s not just the home team that notices.

Opposing right fielders have struck up relationships with the 68's over the years. Former Royals outfielder Jeff Francoeur once threw a $100 bill up to fans in 2011 telling them to buy bacon or beer with it. He was showered with bacon treats and a T-shirt the next time the Royals were in town, for an event known as Bacon Tuesday. The next year, Francoeur and A’s right fielder Josh Reddick came out to the parking lot before a game for a bacon-themed tailgate with the fans. Another game, Francoeur also had some pizza delivered to Section 149, while Torii Hunter once sent up some Popeye’s chicken.

Francoeur hung out for 15 minutes before bringing back a big #BaconFriday tray to the #Royals clubhouse. pic.twitter.com/YOlkaklXGv

Not everyone is a fan of Section 149, though, as opposing players like Jose Bautista were salty with the Oakland bleachers over the years.

During Tuesday night’s game, Rays outfielder Brett Phillips threw a ball up to longtime Section 149 resident Will MacNeil between innings. The two shared a quick chat over the out-of-town scoreboard, as they have a relationship that dates back to 2015, when Phillips played for the Lancaster JetHawks in High-A ball. Back then, Phillips just turned 20 and was trying to make his way up the ladder in the Houston Astros organization. MacNeil is also a die-hard fan of the A’s High-A affiliate, the Stockton Ports. He's become such a fixture at Banner Island ballpark over the years that he's even moonlighted as the PA man on several occasions.

Their friendship started with a joke. Every time Phillips swung his bat in the on-deck circle, MacNeil and his friends would make a loud “Woo!” sound. Phillips caught wind and started messing with them, swinging his bat faster and faster, leading to more and more woo-ing. They’ve been baseball buds ever since. 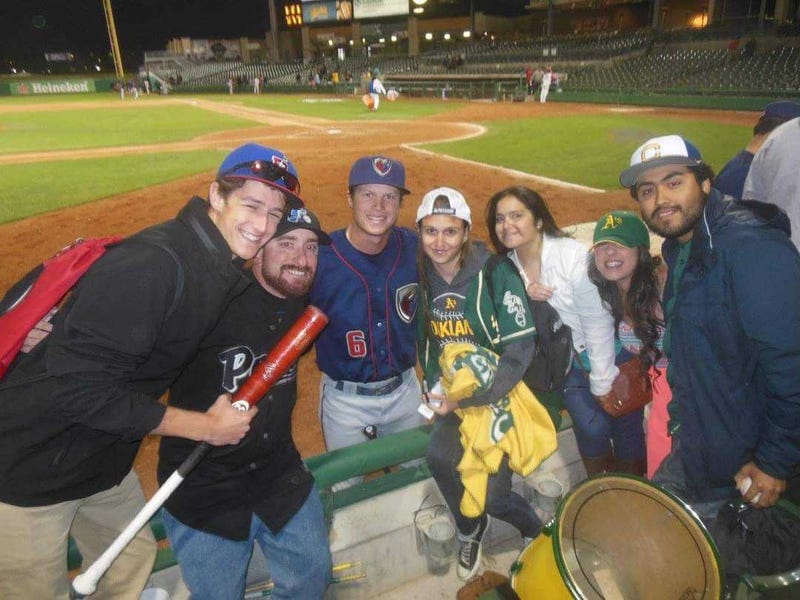 “I look forward to coming to Oakland,” Phillips said, “because the right-field bleachers – I don’t know whatever they call themselves – I think it’s the coolest thing ever that they got their drums, their vuvuzelas. They ride or die or with the team. I told them (Tuesday), regardless of who’s showing up or not to these games, I know the guys in the other dugout, meaning the Oakland A’s, they respect and appreciate the effort. I told them that. It’s super nice. That’s the truth. They’re showing up regardless.”

The respect is mutual.

“It means a lot to us,” MacNeil said. “They kinda understand what we’re going through. Tampa’s in the same boat we are. For Brett to tell us that, it did mean a lot."

A total of 10,141 fans showed up for the mid-week three-game series between the A’s and Rays. Oakland’s season average of 7,716 is dead last in MLB, while Tampa Bay (13,290) ranks 26th. But Phillips thinks it’s important to highlight the fans that are keeping the pulse alive at the Coliseum. Without their noise, that place would be a graveyard.

“The fans are the most important part of professional sports, let’s be honest,” Phillips said. “Who would we be if no fans showed up? We’d just be a bunch of talent in a backfield. You know what I mean? I want to focus on the fans who are showing up here. Respect to them. I appreciate them. I know the A’s appreciate the people. A lot of the times, we get caught up on who’s not showing up. Well, you’re taking away from the people who actually are supporting. I definitely want to stay on that. Shoutout to them.”

The Coliseum and Tropicana Field are often ranked as the two worst baseball stadiums in the country, and both franchises are trying to figure out solutions for the future. The A’s have made headlines for their visits to Las Vegas, but they continue to make headway with their proposed waterfront ballpark district at Howard Terminal in West Oakland. A sect of the Rays fanbase is trying to get the team to move to Tampa instead of staying in St. Petersburg, citing the support that the NFL’s Buccaneers and NHL’s Lightning have received in recent years. Rays and A's fans have also shown solidarity recently while voicing their concerns for a new stadium.

Phillips has become an ambassador of sorts for Tampa Bay baseball, as the fan favorite hails from Seminole, Florida, which is about a 35-minute drive away from The Trop. I asked Phillips if he sees any similarities to the stadium situations between the A’s and Rays.

“I will say this about Tampa,” Phillips said. “Tampa became an expansion team in ‘98. We’re just now hitting the generational fanbase. I grew up a Rays fan. My mom, she was a Cubs fan. The people around there? New York Yankees, Red Sox fans. My kids? They’re gonna be Rays fans. We’re creating that generational fan base finally."

As Phillips noted, the Rays arrived on the scene in 1998. The A’s have been around since 1901, starting in Philadelphia before moving to Kansas City, then Oakland in 1968. The A’s have won four World Series by the Bay and nine overall. The mustache gang Swingin A's dynasty won three straight rings from 1972-74. Oakland natives Rickey Henderson and Dave Stewart helped lead the franchise to its most recent title in 1989 over the rival San Francisco Giants in the famed Bay Bridge Series that featured an earthquake. There’s a rich history of Oakland baseball to be celebrated, which makes the threat of relocation sting even more.

“I am not educated enough to know what’s going on here in Oakland,” Phillips said. “I don’t know. I’ve read some articles about boycotts. Whatever it is, I’m honestly not sure or informed. So I can’t really speak on what’s going on. All I can speak on is, the fans who are showing up to support, the players really do appreciate that.”

MacNeil couldn’t make Wednesday’s matinee between the A’s and Rays, but he had a good excuse. He was making connecting flights to Minnesota, where the A’s will play the Twins this weekend. Unfortunately, MacNeil won’t be able to follow the A’s for their three-game series against the Tigers.

“I had Detroit booked,” MacNeil said, “but work was not happy with me taking the whole week off.”

From the Bronx to San Diego to everywhere in between, the 68's often hit the road for group trips to see the green and gold across the country. The A’s notice.

“There’s a rapport there,” Piscotty said. “It’s fun when you see them out on the road, too.”

When the A’s get back to Oakland for their homestand next week, there will likely still be a lot of empty seats and articles ripping the franchise’s poor attendance. But don’t forget about the loyal drummers who are keeping the beat alive despite owner John Fisher’s apparent efforts to discourage and decimate the fanbase.

“Is it fun right now being an A’s fan at times? No,” MacNeil said. “You get rid of four of your best players and you raise your ticket prices by 40 some-odd percent, or whatever it is, the whole Las Vegas parallel path stuff, it’s not fun being a fan. 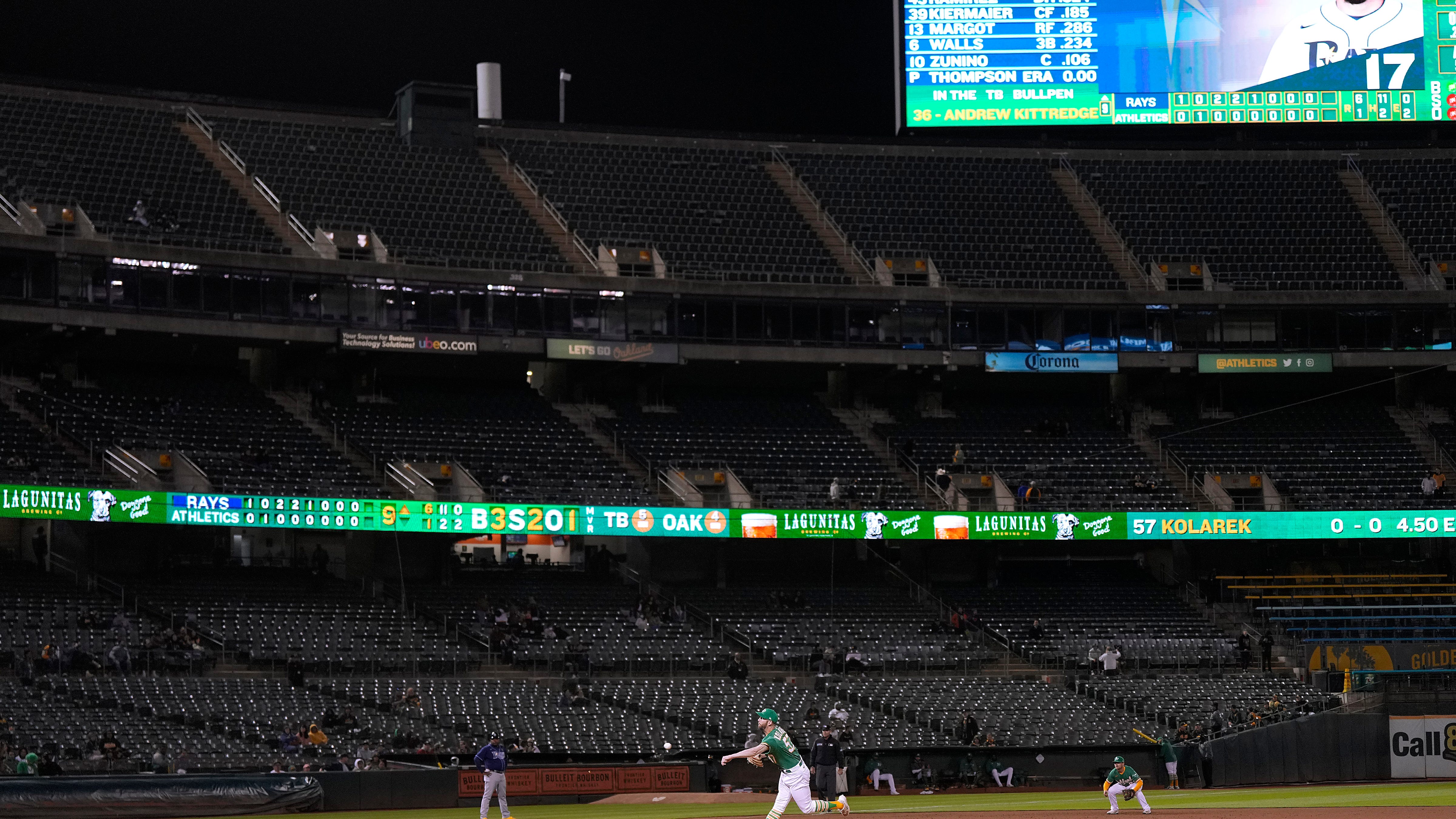