After surviving a near collapse at the hands of Tom Brady’s Tampa Bay Buccaneers, the Rams are moving onto the conference championship, which will be the first played in Los Angeles since 1984. The Rams will host their division rival San Francisco in a rematch of Week 18, when the Niners overcame a 14-point deficit to secure a playoff berth. That game was played in Los Angeles, though it didn’t feel like it with 49ers fans making their presence felt in a big way, outnumbering Rams supporters by a noticeable margin at SoFi Stadium, which also happens to be the site of this year’s Super Bowl.

To prevent that from happening again, the Rams briefly restricted ticket availability for Sunday’s NFC title game, limiting online sales to fans in Greater Los Angeles. Ticketmaster quickly changed course, though that didn’t stop 49ers star Deebo Samuel from commenting on Twitter, trolling the Rams for struggling to fill their own stadium.

I get that we turned sofi stadium to Levi’s but restricting fan from buying tickets is kraxy to me….. IJS

The Niners have always traveled well—hundreds of diehard fans descended on the Rocky statue in Philadelphia before a game against the Eagles earlier this season. The relative proximity of Los Angeles (an hour plane ride from San Francisco) coupled with the Rams’ tepid following in their own city make it almost impossible to Niner-proof SoFi Stadium. As a cultural melting pot that brings together people from all over the globe, limiting tickets to L.A. residents probably wouldn’t have done much anyway, considering how many San Francisco fans already live there.

Samuel hobbled off late in Saturday’s upset of top-seeded Green Bay, though the Pro Bowler plans to practice this week and should play his usual hybrid role against Los Angeles. Despite winning both of their regular season matchups, the 49ers enter Sunday’s NFC Championship as seven-point underdogs against the Rams, who are seeking to become the second team in as many years to play a Super Bowl on their home field. 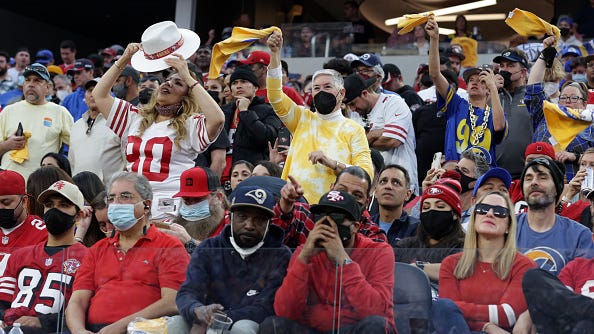