The 49ers wide receiver was pressed into running back duties this season as the team’s tailback group was decimated by injuries. He responded by setting an NFL record with eight regular-season rushing touchdowns, the most ever by a wideout.

Samuel has continued to be the engine of the offense in the postseason, with 110 yards from scrimmage and a touchdown against the Dallas Cowboys before a do-it-all performance against the Green Bay Packers.

Who else can rock a would-be tackler like Deebo? The hybrid weapon is listed at 6-foot, 215 pounds but always seems to fall forward, no matter how big the opponent in front of him.

“Usually receivers are prima donna guys who don’t want much contact,” Nick Bosa said Thursday. “But I think the whole receiver group and Wes Welker as a coach, and Kyle [Shanahan] – they don’t bring guys in who have that mentality. They bring in guys who wanna block and wanna earn the right to go catch balls. Obviously, Deebo is just a savage football player. Nothing more to it. He’s a beast.”

According to NFL Media’s Ian Rapoport, the 49ers will make signing Samuel a priority in the offseason. Rapoport threw out $20 million annual value as a possible figure, so there’s a steep price tag on the playmaker.

With Samuel, offensive coordinator Mike McDaniel has a weapon unlike any other player in the league. McDaniel is a head-coaching finalist with the Miami Dolphins, but if he stays around next year, you know he’d love to be able to call more plays for Deebo.

“Well as we talked about before, this is uncharted territory for all of us, the coaching staff and the player,” McDaniel said. “And it's something that you kind of feel your way through. No, I mean to be honest, Deebo just wants to ball.

“I think he's built for it. And if you would've asked us before we had got to this point with Deebo Samuel, would it be smart to give a receiver you know, 8, 9, 10 carries a game like we have the last couple weeks? Yeah, you'd probably get some resistance, but this is a different player. He's not a receiver. He's a football player at the receiver position who also can play running back and we treat him as such and he would have it no other way.”

Even though Samuel leads the NFL with his 18.2 yards per reception, he’s actually carried the ball 20 times compared to getting seven targets in the two postseason games. 49ers tight end George Kittle said Samuel doesn’t see it as a sacrifice.

“We’re at our best when the football’s in his hands,” Kittle said. “Whether that’s getting tossed the ball, handed the ball, thrown the ball. When he has the ball in his hands, it can be a touchdown on any single play. I think he knows that. I don’t know if it’s really a sacrifice. I think he cherishes that. He cherishes the fact that his team trusts him, his coaching staff trusts him. The fact that he’s got 10 guys out there that will block for him every single time he touches the ball because they know it could be a touchdown? I think he just takes all hits and just runs with ‘em. It is what it is. It’s football.” 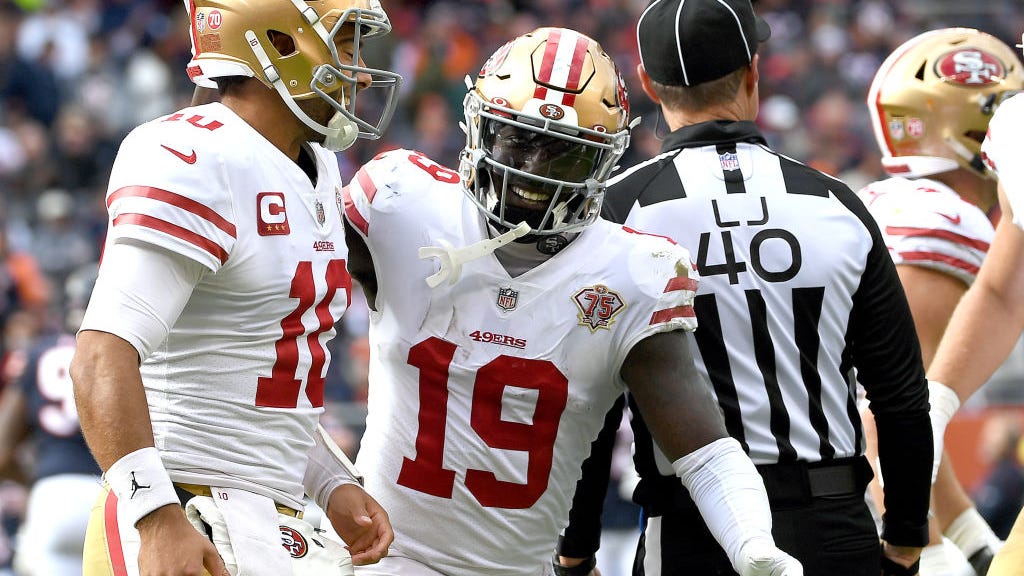