That’s all Jimmy Garoppolo and the 49ers could muster on their opening drive after an Alvin Kamara fumble set them up with a short field inside New Orleans Saints territory. Turns out, that’s all they’d need.

As Jimmy G and George Kittle discussed their miscommunication on a 3rd-and-goal pass attempt from the five-yard line, the 49ers defense had a little chat of their own on the sidelines.

“We looked at each other,” 49ers linebacker Dre Greenlaw said, “and we said, ‘Now it’s on us.’ They don’t need to score more points.”

That seems like a tall order with 53 minutes remaining, but the Niners defense held up its end of the bargain, shutting out the Saints 13-0, as San Francisco rolled to its fourth straight victory.

The Saints were shut out for the first time since Week 17 of the 2001 season (also coming against the 49ers), snapping the NFL’s longest shutout-free streak at 332 games. Coupled with the Seattle Seahawks’ 40-34 overtime loss to the Las Vegas Raiders, the Niners (7-4) now have sole possession of first place in the NFC West with a lot of momentum.

Defensive coordinator DeMeco Ryans’ unit hasn’t given up a point since the second quarter of last week’s contest against the Arizona Cardinals, a span of more than 94 minutes … and counting … going into next week’s much-anticipated showdown against Mike McDaniel and the Miami Dolphins.

“He’s tremendous,” Fred Warner said of Ryans. “Every week, the game plan that he and the other coaches put together is on point. They make it easy for us. We just gotta go out and execute every week.”

Ryans’ passion showed out on the sidelines throughout the second half, as he was jumping and celebrating like he was still suiting up in pads. At this point, it’s probably a foregone conclusion that Ryans will be a head coach by next season.

The 49ers rank first in the NFL in points allowed (15.7) and yards allowed (281.7). They’ve felt like the top-dog defense in the league for a while and they have the numbers to prove it.

After forcing Kamara’s fumble on the opening drive, the Saints punted four straight times before running out the clock in the first half. In a game when the Niners dominated time of possession (34:50 to 25:10), the Saints only had three possessions after halftime. They resulted in a missed field goal, a dramatic goal-line fumble and a fourth-down sack from Nick Bosa.

“Feels great,” Warner said of the shutout, stealing a line from Garoppolo. “That’s our goal every week is to get a shutout. It’s easier said than done, but this one was really special because of the way we had to get it. It’s not like they were behind the 50-yard line the whole game, they were sniffing the goal line multiple times and for guys to stand up. Time kinda slows down in those moments and guys say, ‘We gotta pull this off.’ These are the ones you remember forever.”

In a drive extended by a Bosa fourth-down roughing the passer penalty, the Saints were knocking on the door of the end zone with less than 12 minutes remaining in a two-score game. Right on queue, like he’s done all season, 49ers safety Talanoa Hufanga made the play the team needed, as he put his helmet on the ball and forced another Kamara fumble before it was eventually recovered by Greenlaw.

“All we just need is a blade of grass,” Greenlaw said. “We’re the No. 1 defense in the NFL. Scoreboard shows it all. But the film, the film don’t lie.”

For the final act, the Niners had to make it a little harder on themselves. A holding penalty in the end zone by cornerback Deommodore Lenoir extended the Saints drive and gave ‘em a fresh set of downs at the four-yard line. After three incomplete passes, Bosa looked like he might have jumped early on fourth down but he kept on chugging until he pulled down Andy Dalton to seal the game with his 11.5th sack of the season.

“I didn’t think it counted,” Bosa said of his sack. “But once I realized it did, I was pretty happy. Thought I jumped, but I looked at it and I think it was just a good jump.”

The storylines never stop in the NFL. As we look ahead to next week, it will be interesting to see what wrinkles McDaniel will throw at Ryans in a chess match of current and former Kyle Shanahan coordinators. 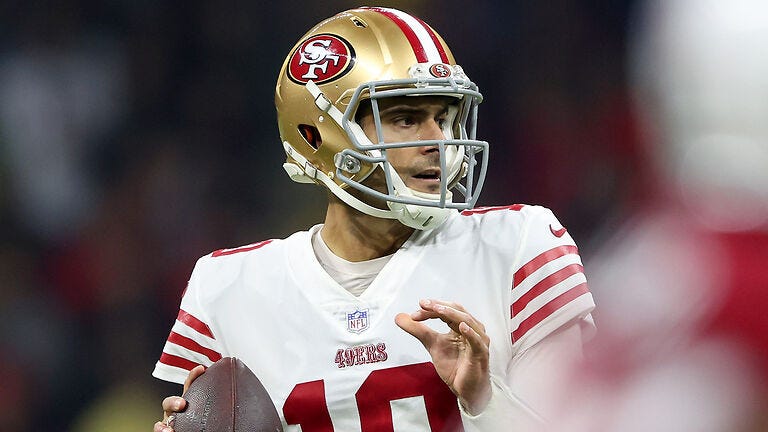