Deebo Samuel laughed at Jalen Ramsey’s attempt to tackle him in the open field during his scintillating 57-yard touchdown catch and run in Monday night’s 24-9 49ers victory.

Deebo took it a step further Tuesday morning with an Instagram post dedicated to the play, including a quick video edit that took another jab at the Rams cornerback.

There are a few pictures of the play in Samuel’s original IG post, but Marcus Thompson of The Athletic shared the juiciest part via Twitter.

Once Deebo Samuel got into the open field, he knew it was Jalen Ramsey in his way.

“I don’t know what he was doing. Just went right by him.”

Ramsey and the Rams had no chance stopping Deebo and the 49ers Monday nighthttps://t.co/JceamKVCrA pic.twitter.com/Hbz9ZExxJp

The video starts off with a short cilp of Ramsey proclaiming “I’m him!”

Then Deebo cuts in and says “Uh oh!” before a highlight of Ramsey’s sorry arm tackle attempt, accompanied with the hilarious sound of the bell in Taco Bell commercials.

Deebo had his first breakout game of 2022 with six catches, 115 yards and one of the most electrifying touchdowns you’ll see. Though Jimmy Garoppolo nearly threw a pick, Deebo cut through the Rams defense with little resistance, as several players had a shot at him and didn’t seem to be game for the hit.

This isn’t the first time Deebo has used Instagram to call out the Rams. Last year, he mocked Aaron Donald’s “Who’s that?” comment after torching them in the regular season.

While the 49ers have won the past seven regular season contests between the two NFC West foes, the Rams still have the trump card of last year’s NFC Championship. Ramsey is known as one of the league’s biggest trash talkers, so he and Deebo should be going at it in their Week 8 rematch at SoFi Stadium. 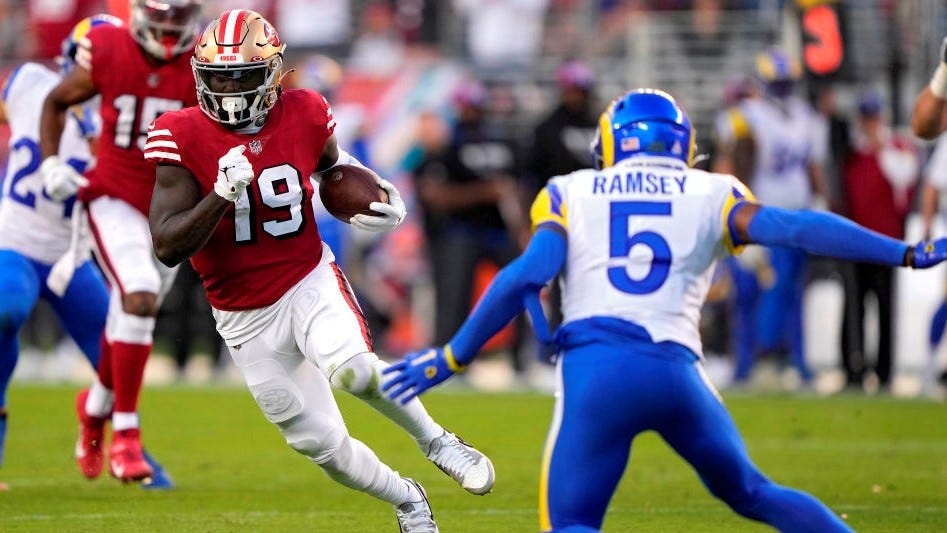