It’s not hyperbole to say Deebo Samuel is a one-of-a-kind talent in the NFL.

In Sunday’s 34-26 win over the Minnesota Vikings, the 49ers wide receiver (do we still call him that?) racked up two more rushing touchdowns as part of his six-carry, 66-yard day. In the process, he accomplished some NFL history, according to ESPN’s Field Yates.

Just three players in NFL history have ever had 1,000 receiving yards, 5 receiving TD and 5 rushing TD in a single season.

Deebo Samuel has done so in just 11 games and is the first WR to ever do so. pic.twitter.com/s46gixyHt5

That’s right -- it only took Samuel until Week 12 to accomplish what no other wide receiver has done in the history of the league.

As I noted before, the 49ers should be careful how they use Samuel, though. According to NFL Media’s Ian Rapoport, Samuel is expected to “miss a little” time with a groin injury he suffered Sunday.

#49ers WR/offensive weapon Deebo Samuel will have an MRI on his groin today and while he’s expected to miss a little time, it’s not considered a major injury, source said. Good news going forward.

Samuel has taken a decent amount of snaps while lined up in the backfield the past three weeks and proven himself to be a great playmaker in his new role with four rushing touchdowns in that span. For the season, Samuel has 56 catches for 1,006 yards and five touchdowns, along with 25 carries for 203 yards and five more rushing scores.

Earlier this season, Shanahan said Samuel was unlike any dual-threat player he had ever coached and No. 19 is showing what separates him from the rest of the pack. Considering the 49ers still have seven games left, Samuel is on pace for more unprecedented accomplishments this season. He also seems like a lock to snap San Francisco’s 18-year drought of having a wide receiver elected to the Pro Bowl. 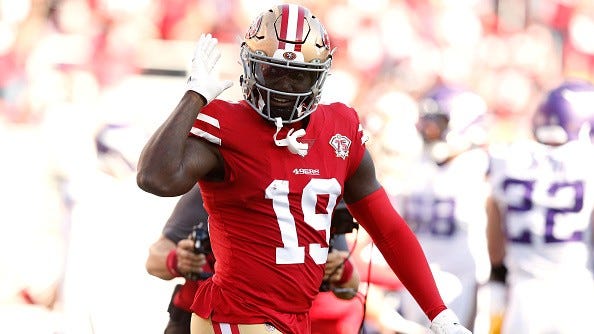