SANTA CLARA – Kyle Shanahan wasn’t a fan of the line of questioning he received following Trey Lance’s season-ending right ankle injury which occurred in Sunday’s 27-7 win over the Seattle Seahawks.

Like Lance’s teammates, Shanahan was devastated to see the 22-year-old’s second NFL season get cut short just five quarters into the season.

“It’s always tough, especially when it’s a big one like that,” Shanahan said. “You feel for someone so bad. It’s a sad one. But you don’t have time to think about it. You have to get right back to the game.”

Hindsight is always 20/20, but the 49ers coach didn’t like any implications of being myopic with the volume of designed run plays for his franchise quarterback.

“Anytime a guy gets hurt, I wish I didn’t call that,” Shanahan said. “But that’s something we were gonna do. It’s something we’ll continue to do. It’s a football play we believe in and something that gives him a chance to be real successful.”

“Anytime a guy gets hurt I wish I didn’t call that. That’s something we were going to do & something we would continue to do. That’s a football play we believe in & something that gives him a chance to be real successful in this league.”

So, it sounds like Shanahan wouldn’t take a mulligan if he had the chance.

When pressed about Lance's rate of rushes, Shanahan pushed back. It appeared Shanahan called three designed running plays within San Francisco’s first 17 snaps of the game Sunday, though the coach said there were other ways the plays could have unfolded.

“Do you guys watch other teams in this league?” Shanahan said. “Buffalo does it all the time with their quarterback. It’s a pretty normal play. It’s part of football and it’s unfortunate he hurt his ankle on it. It’s a very normal-ran play. You guys should watch some other people.”

“Do you guys watch other teams in this league? Buffalo does it all the time w/their QB…It’s part of football & it’s unfortunate he hurt his ankle on it. It’s a very normal ran play. You guys should watch some other ppl.”

Kyle bristled at notion that he put Trey in harms way pic.twitter.com/344nlkq5ue

Perhaps Shanahan has a point, but on paper, Lance was putting himself in harm’s way at a higher rate than Buffalo Bills quarterback Josh Allen. Through his first three NFL starts, Lance averaged 12.3 rushes per game, a similar pace he was on Sunday before going down. That pace would have been unprecedented over the course of a full season, as Lamar Jackson set the NFL quarterback record with 11.7 rushes per game in 2019.

It’s worth noting that Allen has only rushed 12 or more times in five contests out of his first 62 games. For his career, he averages about 6.97 carries per contest. Allen carried the ball 10 times for 56 yards and a touchdown in the Bills' season opener and will play the Titans at 4:15 PT on 'Monday Night Football.'

Allen is listed at 6-foot-5, 237 pounds and often throws himself into piles with reckless abandon. Lance is listed at 6-foot-4, 224 pounds and took a decent amount of hits as a runner in the season opener. Not to mention he missed three weeks last year after injuring his knee while rushing 16 times in his first career start.

Despite the numbers and optics that suggest Shanahan put Lance at a higher risk of danger, 49ers fullback Kyle Juszczyk called the injury a freak occurrence.

“An ankle – that can happen any play,” Juszczyk said. “That’s not someone being more physical than him. That’s fluke stuff.”

Lance's ankle appeared to break as he tried to make a cut while getting thumped to the turf by two defenders: 237-pound linebacker Cody Barton and 345-pound tackle Bryan Mone, the biggest guy on the Seahawks.

Shanahan, Lance and the 49ers can’t take the play back. What’s done is done, but you gotta feel for Lance, who worked his ass off for the past 18 months only to get his opportunity stolen from him in five quarters. 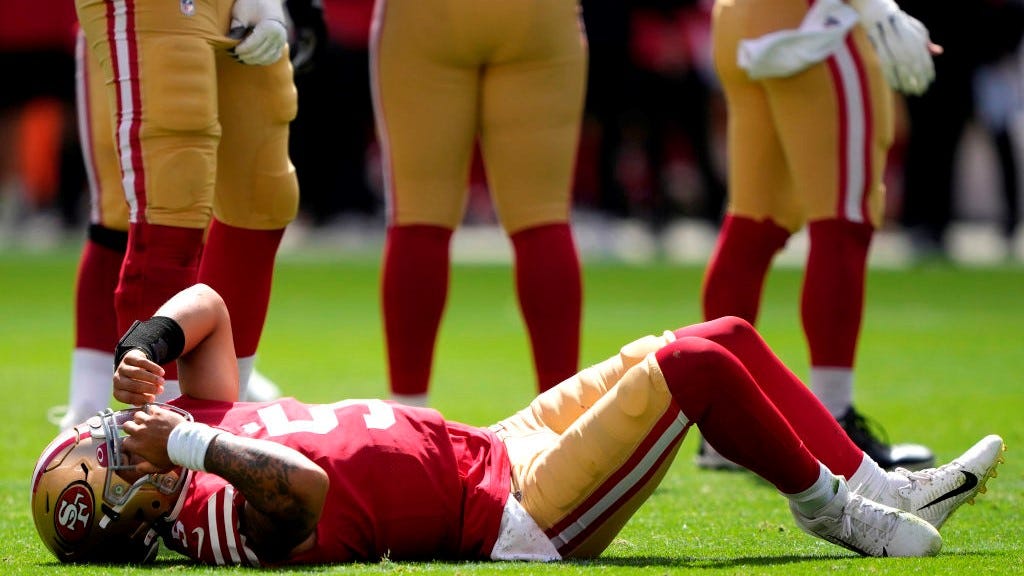