The 49ers got a little dinged up in Sunday’s 19-12 victory over the Dallas Cowboys in the Divisional Round, but coach Kyle Shanahan doesn’t think it will be an issue heading into Sunday’s NFC Championship at the top-seeded Philadelphia Eagles.

Shanahan briefed reporters on Sunday’s injuries during his conference call with reporters on Monday morning. According to Shanahan, running back Christian McCaffrey is dealing with a calf contusion, running back Elijah Mitchell has a groin issue and defensive end Charles Omenihu has an oblique strain.

“We’re expecting to get ‘em all back for Sunday,” Shanahan said. “But we’ll see how it goes through the week of practice and everything. Hopefully it’ll go well and they’ll get ready for Sunday.”

Mitchell spelled McCaffrey at the end of Sunday’s game, as TV cameras caught CMC using a heating pad on his right calf and doing stretches on the sideline to keep it loose. The Cowboys defense put a lid on the 49ers rushing attack, as Mitchell carried it 14 times for 51 yards (3.6 average) and McCaffrey rushed it 10 times for 35 yards (3.5 average).

The 49ers rushed the ball 32 times compared to 29 passes and Shanahan would like to stay close to an even ratio when it comes to run/pass. Entering Sunday’s matchup, Shanahan wanted to run the ball to negate Dallas’ fierce pass rush. The Eagles have an even more menacing front four, as they featured four players with at least 10 sacks while racking up an NFL-best 70 sacks this season.

“Regardless of our goal and what people might think be coming, we always try to be 50-50, regardless, week in and week out,” Shanahan said. “No matter what you do in certain moments in games, you hope that’s where you’re at. You always gotta be able to do both.”

Omenihu briefly went to the locker room in the first half of Sunday’s contest but returned. He picked up two sacks in the Wild Card round win over the Seattle Seahawks and remains a key contributor to the 49ers’ stout d-line.

San Francisco is now preparing for an uber-talented Eagles squad which has changed a bunch since the Niners played in Philadelphia in Week 2 of the 2021 season. As of Monday morning, Shanahan said the coaching staff was still wrapping up Sunday’s game tape before diving into Eagles prep.

“Just seeing them across the league throughout the year and watching a little bit that we’ve done here since last night, there’s a reason that they’ve been the best in the league so far throughout this whole year,” Shanahan said. “Offensively, defensively, special teams. … All they’ve done is play together, add some more players and gotten a lot better since (2021).” 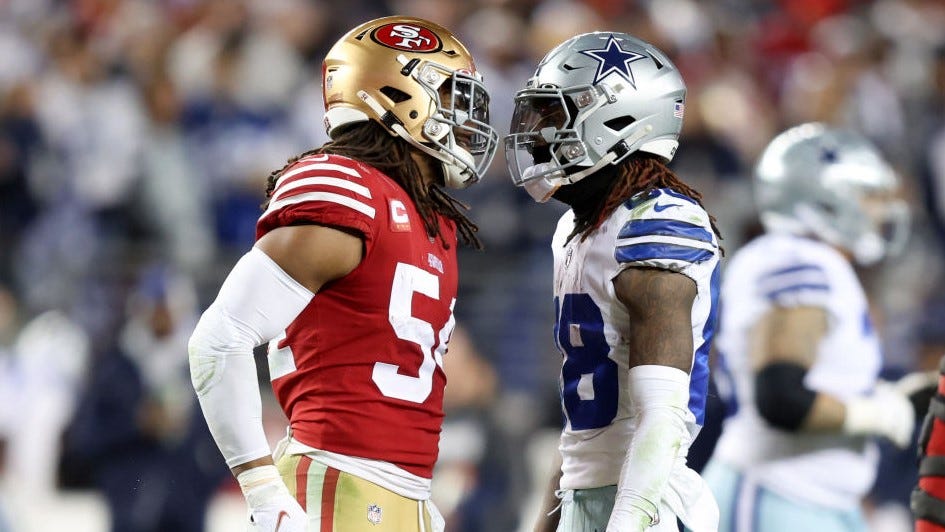