There’s an aura around the 49ers, and not just in Santa Clara.

During his retirement press conference in The Big Easy on Tuesday, following a 16-year run at the helm of the New Orleans Saints, former head coach Sean Payton gave a shoutout to the 49ers.

His press conference spanned more than 90 minutes, but at one point a reporter asked Payton about his successor. At the end of a long-winded answer, he said this season’s Niners remind him of last year’s Super Bowl champs.

“You guys have heard me say this, confidence can develop, but it's from demonstrated behavior,” Payton said, via the Saints. “And that's what you're watching right now, when you watch San Francisco play. Like it's evolving. And they're the team that Tampa was a year ago. And that's powerful in sport."

There’s heavy speculation that Payton could join a broadcast booth next season and he’s already giving out some analysis for free.

The 49ers started the season 3-5 but turned around the campaign with a 31-10 win over the Los Angeles Rams in Week 10. San Francisco snuck into the playoffs as a No. 6 seed with a scintillating 27-24 road win at SoFi Stadium against the Rams in Week 18, kickstarting this epic three-week run that also includes road wins at Jerry’s World at Lambeau Field.

Last season, Tom Brady and the Tampa Bay Buccaneers entered the playoffs as the No. 5 seed before rattling off three straight road wins – including the NFC title game at Lambeau – to reach the Super Bowl. Brady and the Bucs won the Lombardi Trophy at their home stadium, now the 49ers are trying to make back-to-back trips to SoFi Stadium, the site of Super Bowl LVI.

Quarterback Jimmy Garoppolo is putting up some poor numbers this postseason, as he is just 27-of-44 for 303 yards, no touchdowns and two interceptions. But he made a couple of crucial throws on the final drive Saturday to set up Robbie Gould’s game-winner as time expired.

Garoppolo said there is a sense of calm the 49ers feel despite their constant adversity.

“You can't really put your finger on it,” Garoppolo said Wednesday. “There's no statistic for it, but there's a feel to it during the game. And I think the coaches and players, especially the guys on the field, have a feel for that. And you kind of get into a rhythm of it as the game goes.” 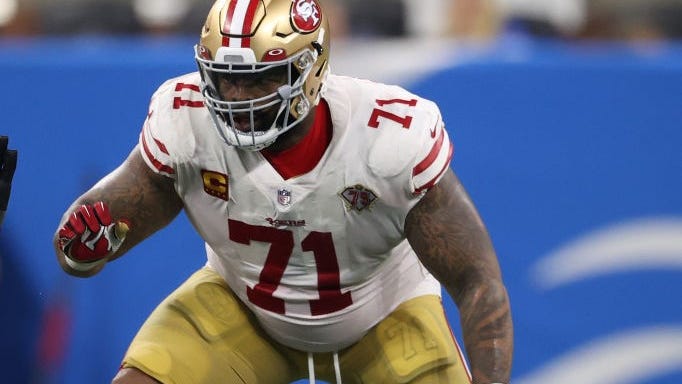