The 49ers offense could afford a slow afternoon on Sunday, as the dominant defense pitched its first shutout of the season in a 13-0 victory over the New Orleans Saints.

After a string of recent luck in the injury department, the 49ers offense suffered a string of dings on Sunday. Running back Elijah Mitchell had to leave the game early in the second half with a knee injury and Spencer Burford was knocked out with a ankle injury, while running back Christian McCaffrey (knee irritation) and wide receiver Deebo Samuel (quad contusion) also missed some plays. Even quarterback Jimmy Garoppolo had a scary moment early in the third quarter when Malcolm Roach tackled him low, but the 49ers quarterback stayed in the game.

Afterwards, 49ers coach Kyle Shanahan provided brief injury updates on his players. We should know more by the time he holds his conference call with reporters on Monday afternoon.

Mitchell’s health was at the top of mind for 49ers Faithful, as the explosive running back was just two-plus games deep into his recovery from an MCL sprain in Week 1 that kept him out for two months.

“Most likely, Elijah will be out for a little bit,” Shanahan said, adding that Mitchell suffered another, less-severe MCL sprain. “There will be opportunities for those guys. And, hopefully, Christian will be all right, too.”

Shanahan said McCaffrey’s issue was a new one that popped up this game. While Mitchell and McCaffrey were sidelined, undrafted Jordan Mason got carries as fellow rookie and third-round pick Ty Davis-Price was inactive.

Mitchell picked up 35 yards on seven carries before he was hurt. In his past three games, Mitchell averaged a healthy 5.4 yards per game and added a fresh dynamic to the star-studded offense.

Ironically, former 49ers running back Jeff Wilson Jr., who was traded to the Miami Dolphins after the McCaffrey trade, will be back in Santa Clara next week for a much-anticipated showdown between Shanahan and former offensive coordinator Mike McDaniel.

As for Garoppolo, he clearly wasn’t happy with Roach’s tackle. TV replays showed Garoppolo clutching his left knee and yelling after taking the hit, which was deemed a roughing the passer penalty.

“It’s football,” Garoppolo said. “But you gotta be smart as players, look out for one another. There’s no place for that. I’m all right. A little sore, but nothing bad. He sprinted off the field right after, I think he knew.”

Jimmy G said he had no thoughts of leaving the game.

“I was staying in the game," Garoppolo said. "I knew what type of game it was. That's what it was all day. That wasn't the only hit that was questionable like that. Throughout the whole game, it was like that, but that's football.”

After losing Trey Lance in Week 2 this season with a foot/ankle injury, the last thing the Niners want to see is Jimmy G go down, even with his shortcomings, which presented themselves in the red zone Sunday. 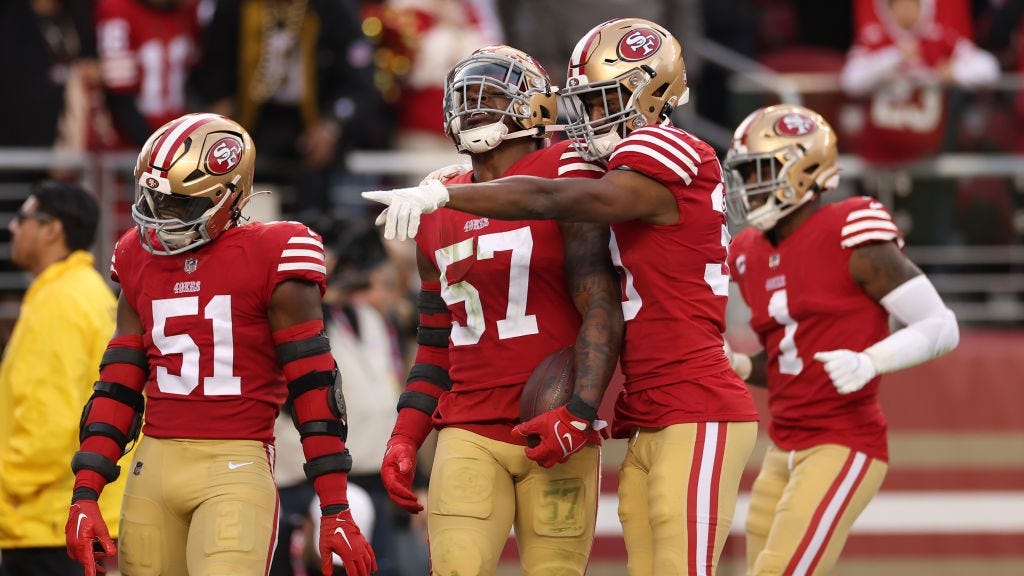