Maybe they would have lost anyway. In fact, they probably would have. After scoring a single touchdown through 59 minutes, going the length of the field against one of, if not the best, defenses in the NFL would have taken nothing short of a miracle. Still, unlikely as a game-tying touchdown would have been, the Cowboys didn’t make it easy on themselves, shooting themselves in the foot with constant mental mistakes, none bigger than on their final play, a disastrously executed, galaxy-brained blunder that went exactly as you’d expect.

Drawn up by coach Mike McCarthy, the play was doomed from the start, an ill-conceived, train wreck of a concept that never should have seen the light of day. With their backs against the wall, needing to span 76 yards in only six seconds (then praying their head case of a kicker would sink the tying PAT to force overtime), it’s no surprise the Cowboys resorted to trickery, hoping to catch the Niners off guard with a bizarre formation, spreading their offensive linemen out wide while slotting running back Ezekiel Elliott under center. McCarthy even had a chance to audible to a different play after San Francisco spent its second of three timeouts, but stayed true to his vision, only for Zeke (shouldering the load for injured teammate Tony Pollard) to get steamrolled by Azeez Al-Shaair at the line of scrimmage, resulting in an anticlimactic, eight-yard checkdown to undrafted rookie KaVontae Turpin.

“Alright Zeke, so first you’re going to line up at center, then snap it to Dak and then get absolutely leveled.” pic.twitter.com/1cvyXGql5U

There’s plenty of blame to go around for what transpired in Silicon Valley, starting with tight end Dalton Schultz, who imploded with two brain-melting gaffes in succession, costing Dallas valuable seconds by not getting out of bounds after a short pickup down the right sideline, then losing the plot again by lazily snagging another pass from Dak Prescott, but only keeping one foot in bounds. While Schultz did score Dallas’ lone touchdown in the losing effort, he didn’t measure up to his 49ers counterpart, George Kittle, whose second-half heroics included one of the great concentration plays you’ll ever see.

The Cowboys’ fateful final play was predictably mocked on social media, drawing unflattering comparisons to a similar debacle years earlier, when Colts coach Chuck Pagano tried to outsmart Bill Belichick on fourth down, only to have it blow up in his face.

We the panthers interviewed Kellen Moore for the HC job! Based on the last play for the cowboys, Ain't no way in hell Moore is coaching us with that trash last play!!!!

spiritually that was as bad as this pic.twitter.com/FesguW6127

First: Dalton Schultz doesn’t even bother putting his other foot down in bounds

Second: Mike McCarthy goes insane and the receiver doesn’t even bother trying to pitch it

I’ve watched the last play that the Cowboys ran last night 50xs. I don’t know what the hell the goal was! 🤷🏾‍♂️

Y’all, I’m over here crying 😭 LAUGHING again…What are the @dallascowboys doing on the LAST PLAY of the game? 🤷🏾‍♂️ I have NO IDEA pic.twitter.com/QySyxb422K

McCarthy was in no mood after the game, stiff-arming a camera man on his way off the field, a stunt he would later apologize for.

Thank you to everyone that has reached out regarding the Mike McCarthy incident. I can see how the photo appeared like he pushed me but it was more of a hand to the lens. I did meet with coach McCarthy privately in his office and he did apologize. @NBCDFW #DallasCowboys pic.twitter.com/LuOfPVRqhq

It wasn’t one play that lost the Cowboys their season, though they had their chances, squandering countless opportunities against a team starting its third-string quarterback. Unfortunately, this feeling has become all too familiar to Cowboys fans, who, since their 90s heyday, have weathered decades of disappointment, with Sunday representing the latest in a long line of heartbreaking defeats, extending Dallas’ drought to 12 straight playoff appearances without reaching the conference championship. 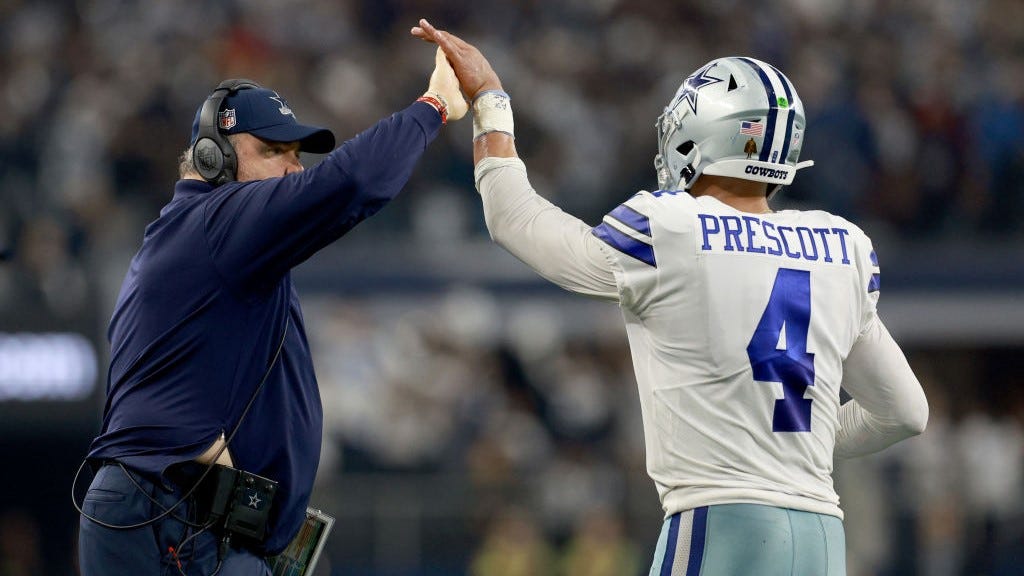 Should the focus be on Mike McCarthy or Dak Prescott after Cowboys' loss to 49ers?
Featured Image Photo Credit: Lachlan Cunningham, Getty Images