Reporters aren’t allowed to shoot rehabbing players on the side fields at 49ers training camp. But there aren’t any rules for the fans in attendance in Santa Clara.

In case you wanted video of Jimmy G throwing, you finally got it.

49ers quarterback Jimmy Garoppolo has been training individually since the start of training camp, as the team hopes to find a trade partner. 49ers fan Brian Nitenson shared some video of Garoppolo throwing Tuesday, which was amplified by NBC Sports Bay Area’s Matt Maiocco via Twitter.

Jimmy Garoppolo rolls left and throws across his body during his throwing session. Video was shot today by #49ers fan ⁦@NitensonBrian⁩. pic.twitter.com/yez7T3vFlh

@JimmyG_10 making all the throws pic.twitter.com/WFOkDj97eg

It’s hard to glean much from this video, with no defense and no pads, but Jimmy G looks pretty healthy and normal for what it’s worth.

Garoppolo finds himself in a holding pattern after undergoing shoulder surgery in March, which affected his ability to be traded until recently. The problem, of course, that the NFL’s revolving door at quarterback was resolved while he was rehabbing.

“Jimmy’s doing a really good job kinda building his stamina in the throwing program that was prescribed all along and working out really strongly and aggressively,” 49ers general manager John Lynch told reporters Tuesday. “But yeah, that situation’s kinda where we described it before. We’ll stay patient for this one as well and come to a great conclusion for everybody involved.”

The NFL is appealing the six-game suspension for Deshaun Watson ruled by a judge and seeking a bigger punishment, so the Cleveland Browns could be a potential partner. The Seattle Seahawks could also be seeking an upgrade over Drew Lock. The Atlanta Falcons reportedly have checked in on Jimmy G, too, but the list of suitors seems short.

Lynch reiterated that Garoppolo is medically cleared and eligible to practice with the 49ers, but they came to a joint decision to keep him throwing individually.

“He’s cleared to be in practice but we’ve made the decision that it’s in his interest to be off the side,” Lynch said. “That was made mutually, that was made with Dr. ElAttrache. He’s no restrictions and I’m watching him throw out here right now and he looks pretty good.”

San Francisco has been candid about its desire to move Garoppolo via trade, though they can save $25.5 million by releasing him. Garoppolo’s base salary of $24.2 million will become guaranteed on Aug. 30 if he’s still on the 49ers roster. 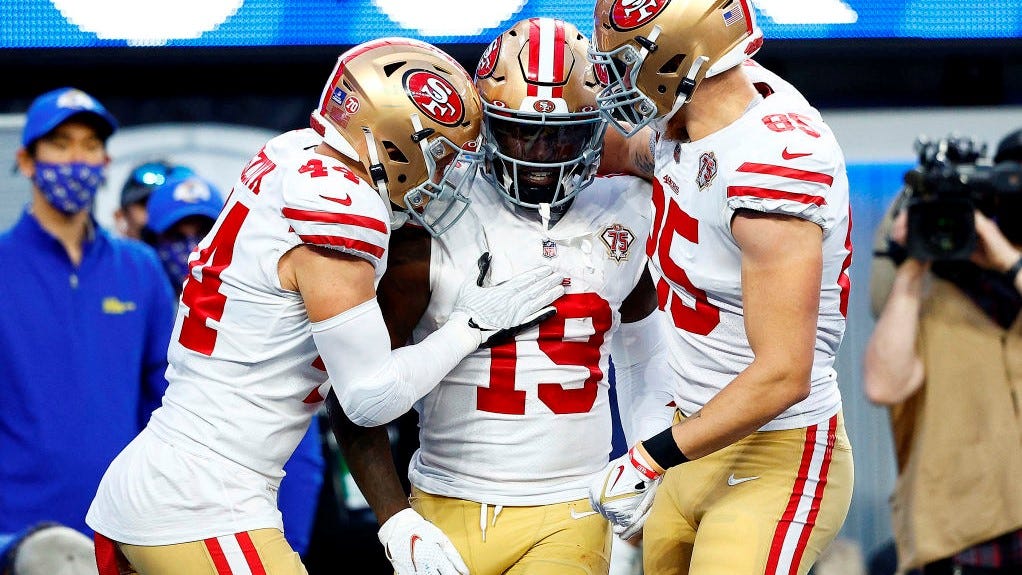 Deebo Samuel on signing 49ers extension: 'I love this team'