In the middle of Tuesday night’s Giants-Dodgers game at Oracle Park, the baseball world learned that broadcasting legend Vin Scully had passed away at the age of 94.

Scully helped shape the epic rivalry during his 67-year run as the voice of the Dodgers, which started in 1950 in Brooklyn and ended in 2016, with his final game taking place in San Francisco. Naturally, Bay Area broadcasters were saddened to hear of the loss and quick to pay tribute.

Vin Scully, legendary Dodgers broadcaster, has died at the age of 94.

RIP to an icon 💙 pic.twitter.com/hRMFHY6gOO

“You don’t have to be from LA to appreciate what that man did,” Kuiper said. “For not just baseball, but for all of the sports that he announced. I know, Mike, that touches your heart.”

After the game, the Giants held a touching in-stadium tribute for Scully, narrated by PA woman Renel Brooks-Moon.

"He left an indelible mark on the game

Meanwhile, the Oakland A’s were in Southern California, playing the Angels in Anaheim when the broadcasters learned of Scully’s passing. Longtime radio man Ken Korach grew up in Southern California listening to his calls of the Dodgers. While giving play-by-play of the sixth inning, Korach and his partner Vince Cotroneo remembered Scully.

.@KenKorachRadio and @vincebaseball pay their respects to Vin Scully

“He’s the reason a lot of us are doing what we’re doing,” Korach said.

“If we had an ounce of the talent that he brought and the smile and the energy, we’d be doing OK,” Cotroneo said.

“And the grace,” Korach added. “He was just so gracious with his time. As many of you knew, I grew up in LA. His was the first baseball voice I heard when the Dodgers moved west in 1958. Everytime that we would chat with him – and the first interview I did with Vin, was actually for a show on A’s television in 1997.

“I hope this comes out the right way, because everybody wanted a piece of him before a game. You go to Dodger Stadium and they’d be lined up outside the booth, like 10-15 people just wanted to say hello and how much he meant to them and the influence that he had. He handled his Vinny-ness, is the best way I can say it.”

RIP to legendary Dodgers broadcaster Vin Scully, who has died at the age of 94. pic.twitter.com/trSC6xxcXV

“I don’t even know what to say,” Glen Kuiper said.

“I don’t know that there are words,” Braden added.

“No question, the most beloved baseball announcer, ever,” Kuiper said.

The stories didn’t stop there, as all the broadcast teams had Scully stories to tell. Legends never die they say, and nor will the adoration of Scully. 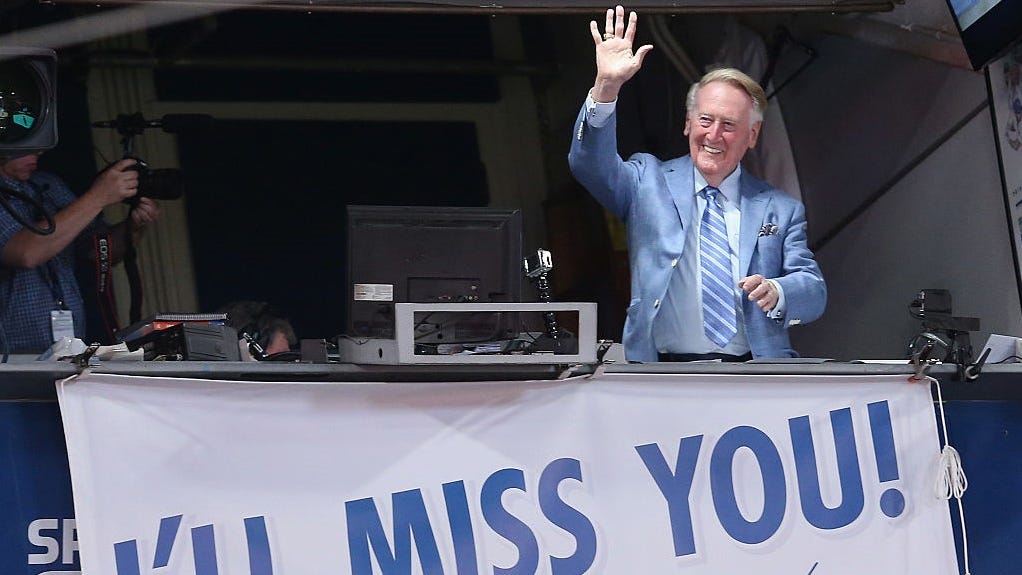