Dan Shaughnessy has been covering MLB for the Boston Globe since 1981 and was voted into the Baseball Hall of Fame in 2016 after winning the J.G. Taylor Spink award.

Over the past two years, he has raised a lot of eyebrows with his Hall of Fame ballot, as it has only featured former Giants second baseman Jeff Kent. Shaughnessy joined 95.7 The Game’s “Willard & Dibs” Wednesday to defend his logic. You can listen to the full interview below:

“In my view, you want to be dominant at your position at the time you played, and not be a cheater,” Shaughnessy said. “From what I can gather, he fits those criteria. He was an MVP while playing second base. We know he wasn’t great defensively. He was regularly in the top 10 on MVP votes, he’s, I think, first in home runs at that position, a lot of hundred RBI seasons.”

Ballot #154 is from Dan Shaughnessy. For the second consecutive year, he submits a Kent-only ballot. He is the only voter from the Boston Globe to not vote for David Ortiz. The Globe's group reveal: https://t.co/SPhXqOZ0m5

Shaughnessy said he thinks Kent has a stronger case for Cooperstown than second basemen Bobby Doerr and Bill Mazeroski, who are already enshrined in the Hall of Fame.

“Those people aren’t from his time, but I think among second basemen, [Kent]’s up there,” Shaughnessy said. “I’m glad he’s on the ballot. Because people hate you if you send in a blank ballot. They hate you no matter what you do. My town, they hate me because I didn’t vote for David Ortiz and whatever. I’m just trying to be consistent. It’s a hard thing. By definition, the writers are all jackasses, I get it. But people need to like dial it down a little bit and stop with the emotion and loving these guys more than your own family. Your family, they love you back more than these guys do.”

Shaughnessy omitted two of this year’s most controversial choices – Bonds and Roger Clemens – who are appearing on their 10th and final writers’ ballot. However, the two former stars, whose reputations are tarnished by their association with performance-enhancing drugs, could be voted in to the Hall of Fame by other committees.

“I think if Barry and Roger just started on the ballot now, they’d have a way better chance than having started 10 years ago,” Shaughnessy said. “It’s going to get easier for them, the younger you are. Look, [Alex Rodriguez]’s going to get in on the writers’ vote at some point in my view. Each year, the crabby, old bastards like myself die off and go away and get replaced by younger guys. 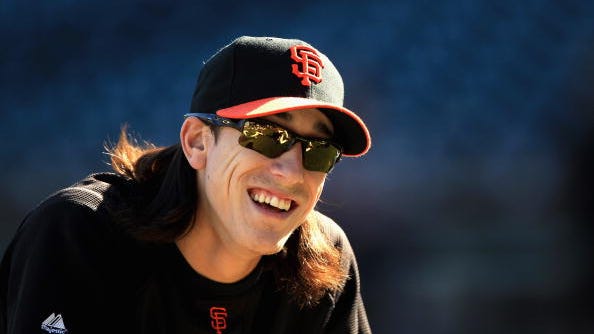 Tim Lincecum won't be a Hall of Famer, but boy was he fun