Baseball lost a legend on Tuesday evening, when Vin Scully passed away at the age of 94. For 67 of those years, from 1950-2016, Scully served as the voice of the Dodgers in both Brooklyn and Los Angeles. Baseball fans learned of Scully's passing in the middle of Tuesday's contest between the Giants and Dodgers at Oracle Park.

You’ll never find a bigger Dodger than Scully, but he actually grew up a Giants fan. Last October, just hours before the Giants played the Dodgers in Game 1 of the NLDS – the first-ever playoff matchup between the storied rivals – Scully joined 95.7 The Game’s “Damon & Ratto” for an epic interview.

Scully still remembers the moment he became a baseball fan. He had just turned nine years old and was walking around the Washington Heights neighborhood in Manhattan.

“I was coming home from grammar school and I came by a Chinese laundry and they had the line score of the World Series between the Yankees and the Giants,” Scully said. “The Yankees won, I believe it was 18-4. As a kid, I immediately felt bad for the Giants and I became a rabid Giants fan. I grew up that way. My grammar school was in walking distance of the Polo Grounds. I went a lot of games free and selling soda pop bottles, I went on the weekend. I grew up in the Polo Grounds.”

If you look at the box score from that day’s contest, Game 2 of the 1936 World Series, the Yankees indeed won 18-4. The Bronx Bombers were loaded with Hall of Famers – Joe DiMaggio went 3-for-5 with a double and two RBIs, Lou Gehrig went 2-for-5 with three RBIs, Bill Dickey went 2-for-5 with a homer and five RBIs, Tony Lazzeri went 1-for-4 with a grand slam and five RBIs and Lefty Gomez struck out eight and walked seven while tossing a complete game. All five guys are in Cooperstown now.

That game was just the beginning for Scully. Fourteen years later, Scully signed on with the Dodgers.

“My boyhood idol was (Giants Hall of Famer) Mel Ott,” Scully said. “You don’t have to run any farther with that angle, than I was deeply committed. However, once you sign a deal and you become a broadcaster with another team and a great rival, you no longer become a fan.”

Fans in San Francisco and Los Angeles might think the Giants-Dodgers rivalry is heated now, but Scully said the intensity peaked in the 50s, before both franchises relocated to the West Coast in 1958.

“Let me roll back the years,” Scully said. “At Ebbets Field in 1950, there was a doorway that opened between the two clubhouses. Things got so hot between the two teams that they nailed the door shut. From 1950 certainly through ‘56, I really and truly would say a prayer before a Giants-Dodgers game so that no one would get hurt.

“There has never been, in my lifetime, the fierceness, the bitterness, the pushing and shove than back and those days in the 50s, where you were worrying that someone would hurt somebody else.  … They were like lions and tigers or rattlesnakes and something else. They just destroyed each other.”

Scully recalled one Giants-Dodgers episode in particular that stuck out in his mind, involving Dodgers legend Jackie Robinson.

“Sal Maglie, one of the great Giants pitchers, who eventually pitched a no-hitter for the Dodgers. Sal was pitching for the Giants,” Scully said. “They called him ‘The Barber’ because he was giving hitters a shave. He’d come up and in around the whiskers. Next thing you know, he’d be looking for the pitch away. Then he’d come up right on top of you again. Sal was not only a great pitcher against the Dodgers, but they detested him.

“This particular day, I believe it was Jackie Robinson who bunted up along first base, because Jackie wanted to retaliate. That’s the way they played it then. Sal didn’t cover. He fielded the bunt and little Davey Williams, who was Alvin Dark’s closest friend raced to the bag to cover. Well, all Jackie knew in his fury, was the sight of a Giants uniform at first base. Davey was, I dunno, maybe 155 pounds. Jackie was a good 200, former running back at UCLA, and unfortunately he destroyed Davey Williams. I believe that Davey never played again.

“Anyway, after the inning I could look down into the visiting dugout and I saw Alvin Dark standing in front of the dugout and waving to all the players, telling them to go down the steps. Everyone but the pitcher Maglie. So the players went down, and you knew if you were watching that Alvin was holding a meeting. The more you thought about it, you had to think that the meeting had to involve Jackie Robinson. Now Robinson was playing third, but it didn’t take too much to realize that Alvin must have said, ‘Whoever hits a double, whoever gets to second base, stop and get to third as hard you can.’ Well, they had it.

“Well, it was actually Alvin Dark, Alvin who hit a cinch double. Alvin played football at LSU, saw a double but felt triple. But more than that, he wanted retaliation. His best friend was knocked out of baseball, so he took dead aim at Jackie Robinson. The collision, I believe, registered on the nearest seismograph. It was a play that you understood. You didn’t have to be an expert involved to know that there was anger involved in this. That’s the way they played. It was very scary to me, because I didn’t ever want to see anybody get hurt.”

It wasn’t all blood and guts, though. Scully also recalled the time he got embarrassed by a renowned fan at a game at Ebbets Field.

“We had a lady named Hilda Chester,” Scully said. “Immediately, in those days, there were individual characters who stood out in the grandstands and certainly Hilda did. This was a quiet, lazy Saturday afternoon and all of the sudden from down below, coming up towards me, this voice from Hilda Chester. She said, ‘Vin Scully, I love youuuu.’ And I kinda lowered my head and she said, ‘Look at me when I’m talking to you.’ The crowd, maybe 6 or 8,000 went bananas laughing at me. I died a little bit in the booth.”

There are many reasons why Scully will never be matched – his dedication, longevity, grace, delivery and overall cheery vibe. Above all, though, he was a masterful storyteller.

At least the Giants and Dodgers were able to give him a parting gift in 2021, facing off in their first playoff series, which was won in five games by the boys in blue.

“As you know, and the good city of San Francisco knows and city of the Los Angeles, these are once-in-a-lifetime experiences,” Scully said. “You just wanna ring ‘em dry.”

It turned out to be a once-in-a-lifetime for Scully. And what a life he lived. 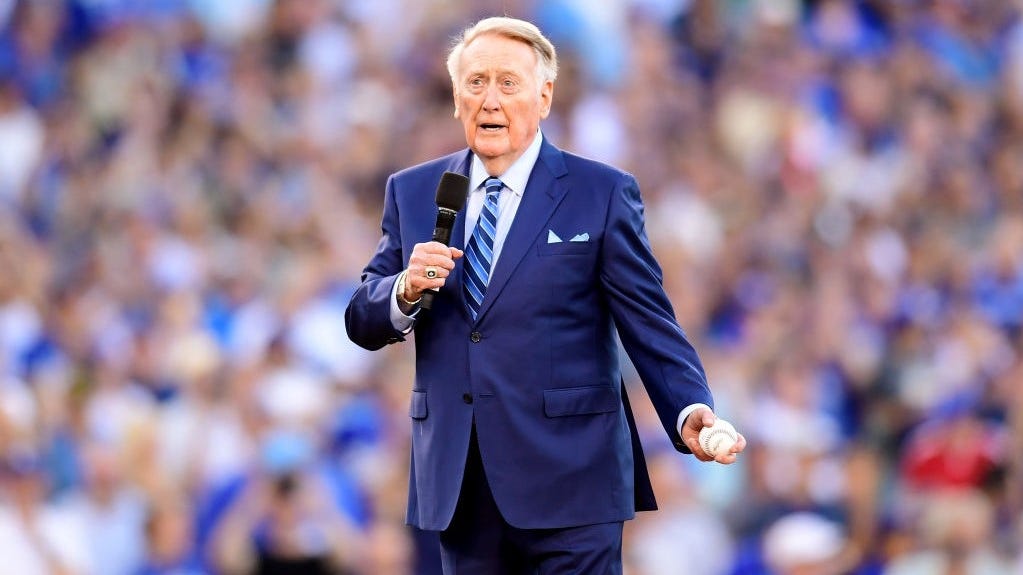