MLB free agency is right around the corner and all eyes are on Aaron Judge. The New York Yankees slugger is set to become a free agent after hitting 62 home runs this season.

Judge will be the most sought-after free agent with the Yankees and his hometown San Francisco Giants as the obvious suitors. However, there could always be a mystery team that sweeps in and lands a big free agent.

“There’s room for the Yankees to spend and they better try hard with Judge,” Heyman said (2:20 in player above). “I think they will. I feel like he’s more likely than not coming back, but you never know in free agency.”

The Yankees aren’t likely to go after a shortstop since they have a few options already in their system, namely Isiah Kiner-Falefa, Oswald Peraza, and prospect Anthony Volpe. That should let New York open up the checkbook for their star slugger.

“I agree with you,” Decker said. “I can’t see him leaving the Yankees. … But if he’s not a Yankee, of course having fun, I can’t imagine him playing for any other team that’s not the San Francisco Giants if he’s not a Yankee. Are there other teams that you think actually will be dark horses?”

“I do think that there will be teams in on Judge beyond those two,” Heyman said. “The Giants do seem like a team that is going to go out there and spend.”

Heyman mentioned that the Giants will likely go after a shortstop as well, which would further their pitch to Judge on signing in San Francisco.

A lot of people are connecting Judge to his “hometown” Giants, but the prized free agent actually grew up a few hours from San Francisco.

“He’s not really a San Francisco guy. I don’t ever believe that anyone really cares that much about playing in their hometown,” Heyman said. “It’s harder to hit home runs there. In New York, you got the legacy, in the middle of a Hall of Fame career. You think he’d go back, but of course, we said that about Freeman. No guarantees.”

This MLB offseason should be a big one with a loaded free-agent class. 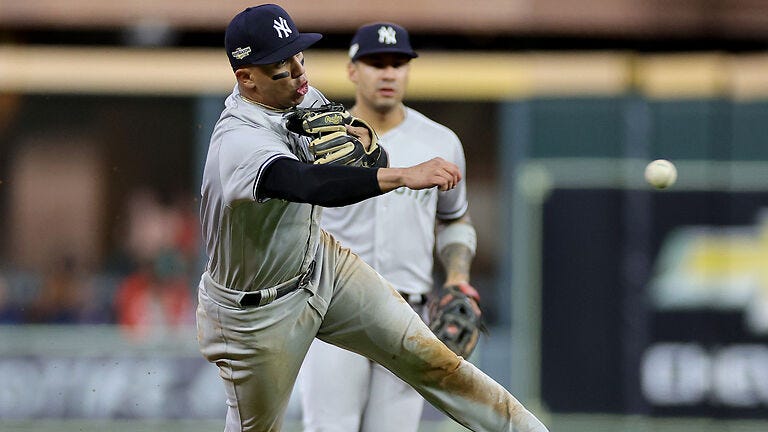 Sherman: Yankees plan on Peraza or Volpe being 2023 shortstop, won't target one in free agency