Wednesday is Ground Hog day and the beast will not see his shadow, but we're thinking he will stay in anyway as a Winter storm warning is in place well into Thursday for the St. Louis region.

HIGH: 30 DEGREES…A SLOW DROP IN TEMPS DURING THE AFTERNOON

WEDNESDAY NIGHT:
ALL SNOW…HEAVY AT TIMES WITH GUSTY WINDS…COLD…TURNING INTO A VERY DRY SNOW BUT WILL TAKE TIME
LOW: 18 DEGREES

THURSDAY:
SNOW AND WIND…FOCUS ON THE SNOW DURING THE MORNING AND EARLY AFTERNOON THEN TAPERING OFF GOING THROUGH THE AFTERNOON…SNOW HEAVY AT TIMES IN THE MORNING
WINDY AND COLD
HIGH: 25 DEGREES…FEELS COLDER

The system is a two parter…first…a cold front works in from the north/northwest…this will spend several hours fighting the warm air. Remember…cold air is heavier than warm air…so cold air in time will get trapped at the surface and the temps aloft will be above freezing…this is why the first half of the system will be a mix of rain, sleet and freezing rain.

Part two is the main low pressure system…a southern low…tracking over southeast MO and southern IL. As this passes it will drag and strengthen the cold air air at all layers of the atmosphere…so part two is the snow event of this system.

A mix of rain, sleet, freezing rain and snow Wednesday morning until 3pm Wednesday afternoon. 1 to 2 inches in this time frame…that will be snow and sleet.

Borderline temps…but slowly dropping temps in that time frame…so ice will be a concern on roadways, trees and powerlines…expect some power outages. 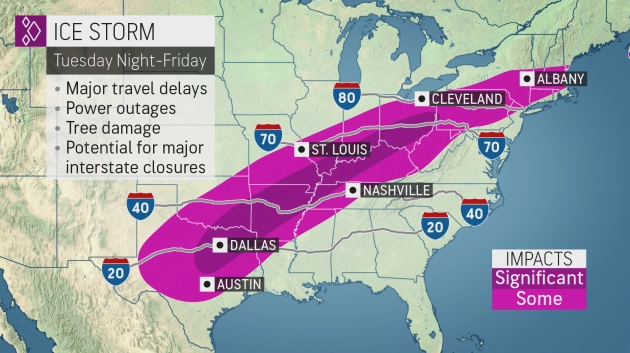 It turns into all snow going through Wednesday afternoon

Snow will be light to start this time period…maybe even stopping for an hour or two (this is not the end of the storm…this is the start of part two) at the start but with borderline temps 30-32 degrees expect some hamster sized flakes at the start of the snow for a several hours.

As temps drop into the 20’s Wednesday night…the snow will become a dry snow…but leading up to that it will be a very wet snow.

Heaviest snow will be 10pm Wednesday night until 11am Thursday morning…snow will be heavy at times with a 1-2 inch per hour snowfall rate…This time frame will be the worst of the snow event.

Not expecting thundersnow at this time…the low pressure should be too far south for that.

The winds will also be strong and gusty during this time frame with blowing and drifting of the snow with poor visibility…especially as the moisture content of the snow dries.

Snow will taper off, going through Thursday afternoon…but still look for strong and gusty winds with blowing snow.

Snow should end around sunset or early evening Thursday eve/night.