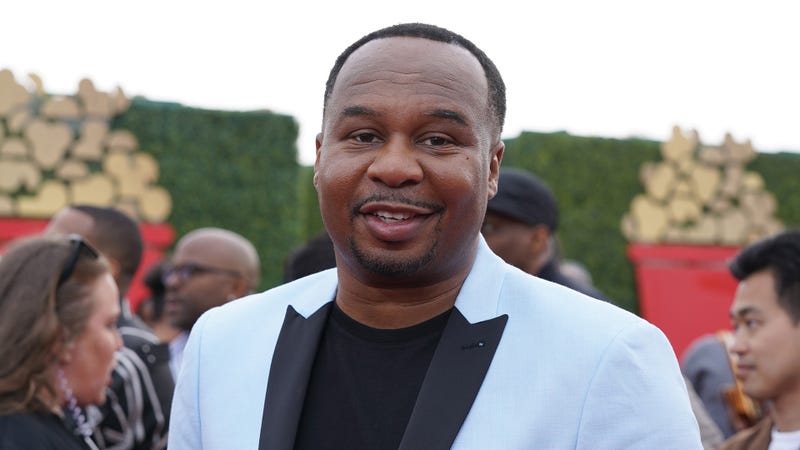 You know him best from his hilarious stand-up, and incredible correspondent work on Comedy Central's The Daily Show since 2015; this week, comedian/writer/actor/radio personality Roy Wood Jr. joins former QB and ESPN host Kenny Mayne on his Hey Mayne podcast to discuss his rise to fame and some of the hurdles he's had to overcome on his way up.

Comedian and television personality Roy Wood, Jr. joins host Kenny Mayne on this week's Hey Mayne podcast sharing stories from his past -- from thinking he was going to prison to launching his comedy career, and following in his dad’s journalism footsteps in his own unique way -- plus his days on the road with comedy headliners, what’s next for Roy, and more.

"Is 'civil rights journalist' a word? Or do you just say 'journalist,'" Roy asks, when the topic of his father, Roy Wood Sr., is brought up at the start of the interview. "Pretty much, if there was Black struggle, my father covered it. Both internationally and domestically," he explains. "My father was always a man, journalistically speaking, who was trying to attack and shine a light on a lot of the B.S. that was going on in the country, and he pretty much did that until his death in '95." Oddly enough, Roy says it was Kenny's fellow sportscaster Stuart Scott who got him into wanting to do journalism, "and wanting to be funny while talking about sports," he admits."Then it dovetailed into what my dad was doing. I'm just a more funny version of my dad; I just try to find some social issue and crack a joke around it, because I choose not to be angry about the world -- because that's not a safe place to exist either."

Skipping ahead, Roy talks about getting his start in the comedy game at the age of nineteen in Tallahassee, FL. Normally thought of as one of the most nerve-racking things a person could ever do, Roy says getting on stage in front of a crowd was nothing compared to where he thought he was headed. "I was on probation for stealing credit cards, so I thought I was going to prison... I didn't care. Once you're sure you're going to jail, anything that happens between then and jail is very easy to do. It's not like, 'oh, what if they hate me? Who cares? You're going to jail, it doesn't matter... go to the open mic.' So, I did and I got probation, and I've been doing stand-up comedy ever since."

"It took being on the edge of losing everything for me to find myself, but once I did I never looked back," Roy adds. "I feel like, to a degree, I think that's a lot of our stories. A lot of us feel like we can't do something, or shouldn't be doing something, or 'I'm not the right person...' Yes you are. You're exactly who you're supposed to be to deliver this thing to the public."

Listen to the full episode with Roy Wood Jr. above -- and follow along with longtime ESPN host Kenny Mayne brings his curiosity and wit to 2400Sports in a new flagship conversation podcast -- now streaming on Audacy. Each week, Kenny will talk to someone he knows… a little, and is fascinated by a lot. Athletes, musicians, writers, and celebrities who he’s had encounters with, been inspired by, and generally thought “I wish I knew more about that person.” This is his chance, and yours too. Hey Mayne will deliver a weekly podcast that blends the sports culture with entertainment, politics, music, comedy, and beyond.