Enter for your chance to win a Walt Disney World vacation from 96.5 TDY! 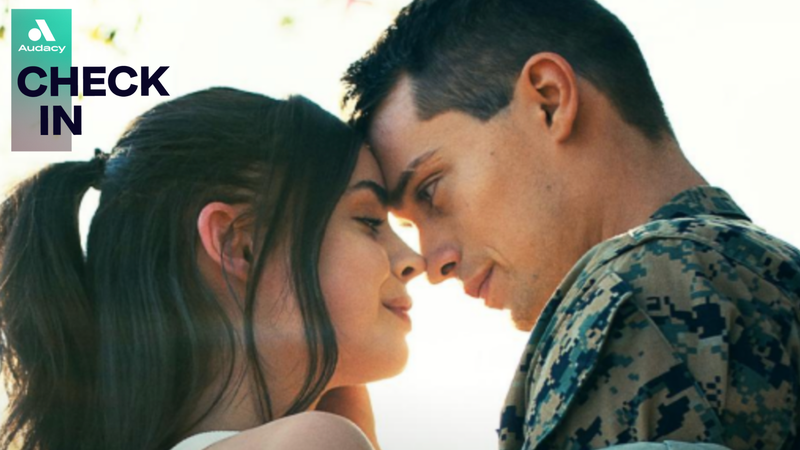 After starting off as a Disney Channel child star in the Descendants series, Sofia Carson has become a streaming service starlet, with her latest film Purple Hearts officially available now on Netflix.

To celebrate the movie’s release, Sofia checked in with Audacy’s Mike Adam to talk all about the flick, working on the soundtrack, and more.

The heartwarming drama co-stars Nicholas Galitzine (Prince Charming from Cinderella with Camila Cabello), as a troubled Marine named Luke who Sofia’s aspiring singer-songwriter character named Cassie agrees to marry solely for the health benefits the military provides. However, when Luke becomes injured in combat, the pair's pretend-relationship gets a little more complicated.

“Cassie from Purple Hearts has definitely been my greatest challenge as an actor,” Sofia admitted about the Netflix project, which she also revealed, “was really exciting because I was able to not only come onboard the project as an actor, but also as executive producer, and writing the soundtrack as well.” It's a passion project that “has been five years in the making,” as Sofia noted, that “I poured my heart and soul into.”

“Cassie is just this bada**, fearless, really brave young woman, who is defined by no man, by no institution, and to be saved by no one but herself and she’s fueled by her passion for justice and she goes on this kind of unexpected deeply emotional and unique love story that changes her, and changes my costar, Luke, very much.”

While this film at its core is a fictional love story, its “inspired by true stories of contract marriages in the military that take place because people are in desperate need of money or health insurance,” and for that reason, it was important to Sofia to “make sure everything was treated with complete and utter honesty and just real and honest truth.”

Because of this, Sofia “studies and did a lot of research for instance on what it means to be a Type 1 Diabetic,” since her character Cassie is in the film. In addition to immigration, primarily “the immigration experience in San Diego,” and “military experience in San Diego, military families. I know that Nick also spoke to a lot of people at Camp Pendleton, and had a military advisor,” with the goal of “trying to be as specific and as true to these stories as possible.”

While working on this project, Sofia’s music world and acting worlds collided, which is undoubtedly a combination that results in happiness. “I was so happy shooting this movie," Sofia says. "It’s a beautiful thing 'cause I get to do everything that I love so much, and express myself in such a beautiful way. Shooting this movie and writing the soundtrack, and bringing it to life was one of the most beautiful experiences of my life.”

When Sofia isn’t working with Netflix, she’s watching it, as Purple Hearts is the actress's second film with the streaming service, following 2020’s Feel the Beat. And one thing is for sure, seeing her face in the number-one-movie-in-America spot is not something she ever imagined, but obviously excitedly welcomes!

As for whats on her watchlist, like the rest of us Sofia just binged season 4 of Stranger Things, and she also really enjoyed the Jane Austen adaptation Persuasion, but admitted that when it comes down to her core is a Gilmore Girls girl, naming the series as her go-to feel-good show.

Sofia and Mike kept the conversation going, talking about who Sofia looks up to for inspiration, which includes Jennifer Lopez and Taylor Swift; the importance of using her platform and voice in for political agendas and in support of human rights; and what is was like to audition for Steven Spielberg, all of which you definitely don’t want to miss.

Check out Sofia’s entire interview above.

Sofia Carson curated this thoughtful playlist of her favorite songs of all-time! Listen to Sofia Carson's Love List now, only on Audacy.